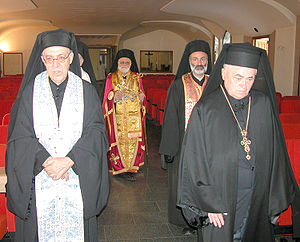 The title Archimandrite primarily used in the Eastern Orthodox and the Eastern Catholic churches, originally referred to a superior
Superior (hierarchy)
In a hierarchy or tree structure of any kind, a superior is an individual or position at a higher level in the hierarchy than another , and thus closer to the apex. It is often used in business terminology to refer to people who are supervisors and in the military to people who are higher in the...
abbot whom a bishop
Bishop
A bishop is an ordained or consecrated member of the Christian clergy who is generally entrusted with a position of authority and oversight. Within the Catholic Church, Eastern Orthodox, Oriental Orthodox Churches, in the Assyrian Church of the East, in the Independent Catholic Churches, and in the...
appointed to supervise
several 'ordinary' abbot
Abbot
The word abbot, meaning father, is a title given to the head of a monastery in various traditions, including Christianity. The office may also be given as an honorary title to a clergyman who is not actually the head of a monastery...
s (each styled hegumenos) and monasteries, or to the abbot of some especially great and important monastery. The title is also used as one purely of honour, with no connection to any actual monastery, and is bestowed on clergy as a mark of respect or gratitude for service to the Church. This particular sign of respect is only given to those priests who have taken vows of celibacy, that is monks; distinguished married clergy may receive the title of archpriest
Archpriest
An archpriest is a priest with supervisory duties over a number of parishes. The term is most often used in Eastern Orthodoxy and Eastern Catholic Churches, although it may be used in the Latin rite of the Roman Catholic Church instead of dean or vicar forane.In the 16th and 17th centuries, during...
.

The term derives from the Greek: the first element from archi- meaning "highest" or from archon "ruler"; and the second root from mandra meaning "enclosure" or "pen" and denoting a "monastery" (compare the usage of "flock" for "congregation").

When the supervision of monasteries passed to another episcopal official — the Great Sakellarios
Sakellarios
Sakellarios is an official entrusted with administrative and financial duties . The title was used in the Byzantine Empire with varying functions, and remains in use in the Eastern Orthodox Church....
("sacristan
Sacristan
A sacristan is an officer who is charged with the care of the sacristy, the church, and their contents.In ancient times many duties of the sacristan were performed by the doorkeepers , later by the treasurers and mansionarii...
") — the title of archimandrite became an honorary one for abbots of important monasteries (compared to an ordinary abbot, a hegumenos).

Initially in some cases it served as an extra title: for example, manuscripts of 1174 mention Hegumen Polikarp of Kiev Cave Monastery as "Hegumen Archimandrite".

The duties of both a hegumen and an archimandrite are the same; however, during the Divine Service a hegumen wears a simple mantle, while the mantle of an archimandrite is decorated with sacral texts; an archimandrite also wears a mitre
Mitre
The mitre , also spelled miter, is a type of headwear now known as the traditional, ceremonial head-dress of bishops and certain abbots in the Roman Catholic Church, as well as in the Anglican Communion, some Lutheran churches, and also bishops and certain other clergy in the Eastern Orthodox...
and bears a pastoral staff (pateritsa).

The Russian Orthodox Church commonly selects its bishop
Bishop
A bishop is an ordained or consecrated member of the Christian clergy who is generally entrusted with a position of authority and oversight. Within the Catholic Church, Eastern Orthodox, Oriental Orthodox Churches, in the Assyrian Church of the East, in the Independent Catholic Churches, and in the...
s from the ranks of the archimandrites.

The word occurs in the Regula Columbani (c. 7), and du Cange
Charles du Fresne, sieur du Cange
Charles du Fresne, sieur du Cange or Ducange was a distinguished philologist and historian of the Middle Ages and Byzantium....
gives a few other cases of its use in Latin documents, but it never came into vogue in the West; yet, owing to intercourse with Greek and Slavonic Christianity, the title sometimes appears in southern Italy and Sicily, and in Croatia, Hungary and Poland.
The source of this article is wikipedia, the free encyclopedia.  The text of this article is licensed under the GFDL.