Encyclopedia
Antigonus II Mattathias (known in Hebrew as Matityahu) (died 37 BC) was the last Hasmonean
Hasmonean
The Hasmonean dynasty , was the ruling dynasty of Judea and surrounding regions during classical antiquity. Between c. 140 and c. 116 BCE, the dynasty ruled semi-autonomously from the Seleucids in the region of Judea...
king of Judea
Judea
Judea or Judæa was the name of the mountainous southern part of the historic Land of Israel from the 8th century BCE to the 2nd century CE, when Roman Judea was renamed Syria Palaestina following the Jewish Bar Kokhba revolt.-Etymology:The...
. He was the son of King Aristobulus II
Aristobulus II
Aristobulus II was the Jewish High Priest and King of Judea, 66 BC to 63 BC, from the Hasmonean Dynasty.-Family:Aristobulus was the younger son of Alexander Jannaeus, King and High Priest, and Alexandra Salome. After the death of Alexander in 76 BC, his widow succeeded to the rule of Judea and...
of Judea. Antigonus was handed over by Herod for execution in 37 BCE, after a reign of three years during which he led a fierce struggle of the Jews
Jews
The Jews , also known as the Jewish people, are a nation and ethnoreligious group originating in the Israelites or Hebrews of the Ancient Near East. The Jewish ethnicity, nationality, and religion are strongly interrelated, as Judaism is the traditional faith of the Jewish nation...
for independence from the Romans.

Antigonus the Hasmonean was captured and taken to Rome in 63 B.C. He escaped and returned to Judea
Judea
Judea or Judæa was the name of the mountainous southern part of the historic Land of Israel from the 8th century BCE to the 2nd century CE, when Roman Judea was renamed Syria Palaestina following the Jewish Bar Kokhba revolt.-Etymology:The...
in 57 BC. After an unsuccessful attempt to oppose the Roman forces there, the senate released him but he refused to surrender his ancestral rights. After the death of his older brother Alexander, Antigonus claimed that his uncle Hyrcanus was a puppet in the hands of the Idumean Antipater
Antipater
Antipater was a Macedonian general and a supporter of kings Philip II of Macedon and Alexander the Great. In 320 BC, he became Regent of all of Alexander's Empire. Antipater was one of the sons of a Macedonian nobleman called Iollas or Iolaus and his family were distant collateral relatives to the...
and attempted to overthrow him with the help and consent of the Romans. He visited Julius Cæsar, who was in Syria in 47, and complained of the usurpation of Antipater and Hyrcanus. In 42, he attempted to seize the government of Palestine by force with the assistance of his brother-in-law, Ptolemy Mennei but was defeated by Herod.

He gained the adherence of the aristocratic class in Jerusalem and the leaders of the Pharisees
Pharisees
The Pharisees were at various times a political party, a social movement, and a school of thought among Jews during the Second Temple period beginning under the Hasmonean dynasty in the wake of...
. The Parthians, who invaded Syria in 40, preferred to see an anti-Roman ruler on the throne of Palestine. When Antigonus promised them large sums of gold and five hundred female slaves besides, they put a troop of five hundred warriors at his disposal. Hyrcanus was sent to Babylon after suffering the mutilation of his ears, which rendered him unfit for the office of high priest. Herod fled from Jerusalem. In 40 CE Antigonus was officially proclaimed king and high priest by the Parthians. His three year reign was a continuous struggle.
On Herod's return from Rome in 39 he opened a campaign against Antigonus and laid siege to Jerusalem. In the spring of 38 Herod wrested control of the province of Galilee and eventually all of Palestine as far as Jerusalem. Due to the approach of winter, Herod postponed his siege of Jerusalem
Siege of Jerusalem (37 BC)
Herod the Great's Siege of Jerusalem was the final step in his campaign to secure the throne of Judea. Aided by Roman forces provided by Marcus Antonius , Herod was able to capture the city and depose Antigonus II Mattathias, ending Hasmonean rule...
, where Antigonus and the remnants of his army took refuge, until spring. Herod was held off for 3-5 months, but famine led to surrender. Antigonus was taken to Antioch and executed, ending Hasmonean
Hasmonean
The Hasmonean dynasty , was the ruling dynasty of Judea and surrounding regions during classical antiquity. Between c. 140 and c. 116 BCE, the dynasty ruled semi-autonomously from the Seleucids in the region of Judea...
rule. 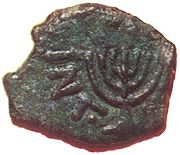 Josephus
Josephus
Titus Flavius Josephus , also called Joseph ben Matityahu , was a 1st-century Romano-Jewish historian and hagiographer of priestly and royal ancestry who recorded Jewish history, with special emphasis on the 1st century AD and the First Jewish–Roman War, which resulted in the Destruction of...
states that Marc Antony beheaded Antigonus (Antiquities, XV 1:2 (8-9). Roman historian Dio Cassius
Dio Cassius
Lucius Cassius Dio Cocceianus , known in English as Cassius Dio, Dio Cassius, or Dio was a Roman consul and a noted historian writing in Greek...
says he was crucified. Cassius Dio's Roman History records: "These people [the Jews] Antony entrusted to a certain Herod to govern; but Antigonus he bound to a stake and scourged, a punishment no other king had suffered at the hands of the Romans, and so slew him." In his Life of Antony, Plutarch
Plutarch
Plutarch then named, on his becoming a Roman citizen, Lucius Mestrius Plutarchus , c. 46 – 120 AD, was a Greek historian, biographer, essayist, and Middle Platonist known primarily for his Parallel Lives and Moralia...
claims that Antony had Antigonus beheaded, "the first example of that punishment being inflicted on a king."

In 1971, bulldozers removing earth in Jerusalem for a construction project uncovered a tomb with an inscription that, according to some scholars, indicates that this was the tomb of King Antigonus, the last Hasmonean king.

Author Robert Graves
Robert Graves
Robert von Ranke Graves 24 July 1895 – 7 December 1985 was an English poet, translator and novelist. During his long life he produced more than 140 works...
in his historical fiction novel King Jesus
King Jesus
King Jesus is a semi-historical novel by Robert Graves, first published in 1946. The novel treats Jesus not as the son of God, but rather as a philosopher with a legitimate claim to the Judaean throne through Herod the Great, as well as the Davidic monarchy; and treats numerous Biblical stories in...
presents Hasmonean King Antigonus as the father of Mary the mother of Jesus
Mary (mother of Jesus)
Mary , commonly referred to as "Saint Mary", "Mother Mary", the "Virgin Mary", the "Blessed Virgin Mary", or "Mary, Mother of God", was a Jewish woman of Nazareth in Galilee...
, i.e., the maternal grandfather of Jesus Christ
Jesus
Jesus of Nazareth , commonly referred to as Jesus Christ or simply as Jesus or Christ, is the central figure of Christianity...
. Graves claimed to have proof supporting this association but never published said evidence. Author Joseph Raymond in his book Herodian Messiah attempts to provide a case for Jesus as the grandson of King Antigonus.