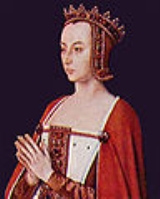 Encyclopedia
Anne of France (3 April 1461 – 14 November 1522) was the eldest daughter of Louis XI of France
Louis XI of France
Louis XI , called the Prudent , was the King of France from 1461 to 1483. He was the son of Charles VII of France and Mary of Anjou, a member of the House of Valois....
and his second wife, Charlotte of Savoy
Charlotte of Savoy
Charlotte of Savoy was the second wife and only Queen consort of Louis XI of France. She had three surviving children, one of whom succeeded Louis as King Charles VIII of France, with her eldest daughter, Anne of France, acting as his regent.- Family :She was a daughter of Louis, Duke of Savoy,...
. Anne was the sister of King Charles VIII of France
Charles VIII of France
Charles VIII, called the Affable, , was King of France from 1483 to his death in 1498. Charles was a member of the House of Valois...
, for whom she acted as regent
Regent
A regent, from the Latin regens "one who reigns", is a person selected to act as head of state because the ruler is a minor, not present, or debilitated. Currently there are only two ruling Regencies in the world, sovereign Liechtenstein and the Malaysian constitutive state of Terengganu...
during his minority; and of Joan of France
Joan of France, Duchess of Berry
Joan of France was briefly Queen consort of France as wife of King Louis XII of France, in between the death of her brother, Charles VIII, and the annulment of her marriage....
, who was briefly queen consort to Louis XII
Louis XII of France
Louis proved to be a popular king. At the end of his reign the crown deficit was no greater than it had been when he succeeded Charles VIII in 1498, despite several expensive military campaigns in Italy. His fiscal reforms of 1504 and 1508 tightened and improved procedures for the collection of taxes...
. As regent of France, Anne was one of the most powerful women of the late fifteenth century and was referred to as Madame la Grand.

Anne was born at the Chateau of Genappe
Genappe
Genappe is a Walloon municipality located in the Belgian province of Walloon Brabant. On 1 January 2006 Genappe had a total population of 14,136...
in Brabant
Duchy of Brabant
The Duchy of Brabant was a historical region in the Low Countries. Its territory consisted essentially of the three modern-day Belgian provinces of Flemish Brabant, Walloon Brabant and Antwerp, the Brussels-Capital Region and most of the present-day Dutch province of North Brabant.The Flag of...
on 3 April 1461, the eldest surviving daughter of King Louis XI of France and Charlotte of Savoy. Her brother, Charles would later succeed their father as Charles VIII of France. Her younger sister Joan became for a brief period, a queen consort of France as the first wife of Louis XII
Louis XII of France
Louis proved to be a popular king. At the end of his reign the crown deficit was no greater than it had been when he succeeded Charles VIII in 1498, despite several expensive military campaigns in Italy. His fiscal reforms of 1504 and 1508 tightened and improved procedures for the collection of taxes...
. Anne was originally betrothed to Nicholas, Duke of Lorraine and was created Viscountess of Thouars in 1468 in anticipation of the marriage. However, Nicholas broke the engagement to pursue Mary, Duchess of Burgundy, and then died unexpectedly in 1473, prompting Louis to take back the fief. That same year, on 3 November, Anne married Peter of Bourbon
Peter II, Duke of Bourbon
Peter II, Duke of Bourbon was the son of Charles I, Duke of Bourbon and Agnes of Burgundy, and a member of the House of Bourbon...
instead, and took up rule of the Beaujolais at the same time, when her husband was ceded the title of 'Lord of Beaujeu' by his brother the Duke of Bourbon. Anne was just twelve years old at the time.

During the minority of Anne's brother, Charles VIII of France
Charles VIII of France
Charles VIII, called the Affable, , was King of France from 1483 to his death in 1498. Charles was a member of the House of Valois...
, Peter and Anne held the regency
Regent
A regent, from the Latin regens "one who reigns", is a person selected to act as head of state because the ruler is a minor, not present, or debilitated. Currently there are only two ruling Regencies in the world, sovereign Liechtenstein and the Malaysian constitutive state of Terengganu...
of France. This regency lasted from 1483 until 1491, and together Peter and Anne maintained the royal authority and the unity of the kingdom against the Orléans party, which was in open revolt during the "Mad War
Mad War
The Mad War , also known as the War of the Public Weal, was a late Medieval conflict between a coalition of feudal lords and the French monarchy. It occurred during the regency of Anne of Beaujeu in the period after the death of Louis XI and before the majority of the young king Charles VIII...
" of the 1480s. As regent of France, Anne was one of the most powerful women in the late fifteenth century, and she was referred to as Madame la Grand.

Anne's regency overcame many difficulties, including unrest amongst the magnates who had suffered under Louis XI
Louis XI of France
Louis XI , called the Prudent , was the King of France from 1461 to 1483. He was the son of Charles VII of France and Mary of Anjou, a member of the House of Valois....
's oppressions. Concessions, many of which sacrificed Louis's favourites, were made, and land was restored to many of the hostile nobles, including the future Louis XII of France, then Duke of Orléans. Louis tried to obtain the regency, but the Estates General sided with her.

She gave her support to Henry Tudor
Henry VII of England
Henry VII was King of England and Lord of Ireland from his seizing the crown on 22 August 1485 until his death on 21 April 1509, as the first monarch of the House of Tudor....
against his rival, King Richard III of England
Richard III of England
Richard III was King of England for two years, from 1483 until his death in 1485 during the Battle of Bosworth Field. He was the last king of the House of York and the last of the Plantagenet dynasty...
, when he sought her aid to oust Richard, who was deemed by many to have been a usurper. Anne supplied him with French troops for the 1485 invasion which culminated at the Battle of Bosworth on 22 August, where Henry emerged the victor, ascending the throne as Henry VII.

Anne made the final treaty ending the Hundred Years' War
Hundred Years' War
The Hundred Years' War was a series of separate wars waged from 1337 to 1453 by the House of Valois and the House of Plantagenet, also known as the House of Anjou, for the French throne, which had become vacant upon the extinction of the senior Capetian line of French kings...
, the Treaty of Etaples and, in 1491 (despite Austrian and English opposition), arranged the marriage of her brother Charles to Anne, Duchess of Brittany
Anne of Brittany
Anne, Duchess of Brittany , also known as Anna of Brittany , was a Breton ruler, who was to become queen to two successive French kings. She was born in Nantes, Brittany, and was the daughter of Francis II, Duke of Brittany and Margaret of Foix. Her maternal grandparents were Queen Eleanor of...
, in order to annex Brittany
Brittany
Brittany is a cultural and administrative region in the north-west of France. Previously a kingdom and then a duchy, Brittany was united to the Kingdom of France in 1532 as a province. Brittany has also been referred to as Less, Lesser or Little Britain...
to the French crown. When Charles ended the regency in 1491, both Anne and Peter fell victim to the wrath of the new queen, whose duchy's independence had been compromised.

Anne and Peter produced only one surviving child, Suzanne
Suzanne, Duchess of Bourbon
Suzanne de Bourbon was suo jure Duchess of Bourbon and Auvergne from 1503 to her death. Her husband was Charles de Bourbon.-Inheritance and marriage:...
, born 10 May 1491 (Anne had also become pregnant in 1476, but the baby is presumed to have miscarried or been stillborn). Suzanne succeeded Peter as suo jure
Suo jure
Suo jure is a Latin phrase meaning "in her [or his] own right".It is commonly encountered in the context of titles of nobility, especially in cases where a wife may hold a title in her own right rather than through her marriage....
Duchess of Bourbon on his death in 1503. Anne, however, had always been the more dominant member in her marriage and remained the administrator of the Bourbon lands after his death, protecting them from royal encroachment. In addition to having had a strong, formidable personality, Anne was an extremely intelligent, shrewd and energetic woman. Her father had termed her "the least foolish woman in France".
Anne was dark-haired with a high forehead, a widow's peak
Widow's peak
A widow's peak is a distinct point in the hairline in the center of the forehead. This hair anomaly is a result of a lower-than-usual position of the intersection of the bilateral periorbital fields of hair-growth suppression on the forehead.-Definition:...
, and finely-arched eyebrows. She was further described as having had clear brown eyes, direct in their gaze; a sharp, haughty nose, thin lips, thin hands, and she "stood straight as a lance".

Anne was responsible for the housing and education for many of the aristocracy's children including Diane de Poitiers
Diane de Poitiers
Diane de Poitiers was a French noblewoman and a prominent courtier at the courts of kings Francis I and his son, Henry II of France. She became notorious as the latter's favourite mistress...
and Louise of Savoy
Louise of Savoy
Louise of Savoy was a French noble, Duchess regnant of Auvergne and Bourbon, Duchess of Nemours, the mother of King Francis I of France...
. She is credited with instructing these young people with the new "refined" manners such as not using their fingers to wipe their noses but a "piece of fabric". Louise of Savoy would act as regent several times when her son Francis
Francis I of France
Francis I was King of France from 1515 until his death. During his reign, huge cultural changes took place in France and he has been called France's original Renaissance monarch...
was king. By being raised by Anne, she was able to learn about France and its governance from up close. Anne also oversaw the education of Margaret of Austria, who had been intended as a bride for Anne's brother Charles. Margaret would later become Governor of the Habsburg Netherlands.

Anne wrote an instruction book for her daughter. It is called Lessons for My Daughter. In it she advises her daughter to surround herself with frugal people and that true nobility comes from being humble, benign and courteous. Absent these, other virtues are worth nothing.

A highly fictitious account of her life and her supposed romance with Louis XII was written in 1947 by Muriel Roy Bolton called The Golden Porcupine. It is nothing more than a historical romance so cannot be regarded as a biography. Anne also appears as a minor character in Michael Ennis' novel The Duchess of Milan.

She makes a fleeting appearance in Victor Hugo
Victor Hugo
Victor-Marie Hugo was a Frenchpoet, playwright, novelist, essayist, visual artist, statesman, human rights activist and exponent of the Romantic movement in France....
's Notre Dame de Paris: we are told that in December 1481, the Archdeacon of Josas, Claude Frollo, unsuccessfully attempts to block her visit to the cathedral cloister because she is a woman, then refuses to attend on her visit. The implication is that, already in sexual torment because of the gypsy Esméralda
Esmeralda (The Hunchback of Notre Dame)
Esmeralda, or La Esmeralda , born Agnes, is a fictional character in Victor Hugo's 1831 novel The Hunchback of Notre-Dame . She is a French Gypsy girl...
, he fears losing control in the presence of an attractive young woman.