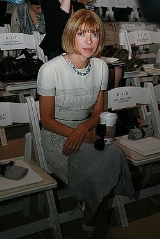 Overview
Anna Wintour, OBE
Order of the British Empire
The Most Excellent Order of the British Empire is an order of chivalry established on 4 June 1917 by George V of the United Kingdom. The Order comprises five classes in civil and military divisions...
(born November 3, 1949) is the British-born editor-in-chief of American Vogue
Vogue (magazine)
Vogue is a fashion and lifestyle magazine that is published monthly in 18 national and one regional edition by Condé Nast.-History:In 1892 Arthur Turnure founded Vogue as a weekly publication in the United States. When he died in 1909, Condé Montrose Nast picked up the magazine and slowly began...
, a position she has held since 1988. With her trademark pageboy
Pageboy
The pageboy is a hairstyle named after what was believed to be the haircut of an English page boy. It has straight hair hanging to below the ear, where it usually turns under. Often there is a fringe in the front. This style was popular in the 1950s and 1960s.-Design and style:The pageboy...
bob haircut
Bob cut
A "bob cut" is a short haircut for women in which the hair is typically cut straight around the head at about jaw-level, often with a fringe at the front.-The beginning:...
and sunglasses, Wintour has become an institution throughout the fashion world, widely praised for her eye for fashion trends and her support for younger designers. Her reportedly aloof and demanding personality has earned her the nickname "Nuclear Wintour".