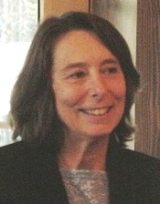 Encyclopedia
Ann Beattie is an American
United States
The United States of America is a federal constitutional republic comprising fifty states and a federal district...
short story
Short story
A short story is a work of fiction that is usually written in prose, often in narrative format. This format tends to be more pointed than longer works of fiction, such as novellas and novels. Short story definitions based on length differ somewhat, even among professional writers, in part because...
writer
Writer
A writer is a person who produces literature, such as novels, short stories, plays, screenplays, poetry, or other literary art. Skilled writers are able to use language to portray ideas and images....
and novelist. She has received an award for excellence from the American Academy and Institute of Arts and Letters and a PEN
PEN American Center
PEN American Center , founded in 1922 and based in New York City, works to advance literature, to defend free expression, and to foster international literary fellowship. The Center has a membership of 3,300 writers, editors, and translators...
/Bernard Malamud Award for excellence in the short story form. Her work has been compared to that of Alice Adams
Alice Adams (writer)
Alice Adams was an American novelist, short story writer, and university professor....
, J.D. Salinger, John Cheever
John Cheever
John William Cheever was an American novelist and short story writer. He is sometimes called "the Chekhov of the suburbs." His fiction is mostly set in the Upper East Side of Manhattan, the Westchester suburbs, old New England villages based on various South Shore towns around Quincy,...
, and John Updike
John Updike
John Hoyer Updike was an American novelist, poet, short story writer, art critic, and literary critic....
. She holds an undergraduate degree from American University
American University
American University is a private, Methodist, liberal arts, and research university in Washington, D.C. The university was chartered by an Act of Congress on December 5, 1892 as "The American University", which was approved by President Benjamin Harrison on February 24, 1893...
and a masters degree from the University of Connecticut
University of Connecticut
The admission rate to the University of Connecticut is about 50% and has been steadily decreasing, with about 28,000 prospective students applying for admission to the freshman class in recent years. Approximately 40,000 prospective students tour the main campus in Storrs annually...
.

Born in Washington, D.C.
Washington, D.C.
Washington, D.C., formally the District of Columbia and commonly referred to as Washington, "the District", or simply D.C., is the capital of the United States. On July 16, 1790, the United States Congress approved the creation of a permanent national capital as permitted by the U.S. Constitution....
, Beattie grew up in Chevy Chase, Washington, D.C.
Chevy Chase, Washington, D.C.
Chevy Chase is a neighborhood in northwest Washington, D.C. It borders Chevy Chase, Maryland, a collection of similarly affluent neighborhoods.-Geography:...
. She gained attention in the early 1970s with short stories published in The Western Humanities Review, Ninth Letter
Ninth Letter
Ninth Letter is a literary magazine that publishes poetry, fiction, and nonfiction. It is an interdisciplinary collaboration between the and the Creative Writing Program at the University of Illinois at Urbana-Champaign. Ninth Letter exists in two related but distinct forms: a biannual print...
, the Atlantic Monthly, and The New Yorker
The New Yorker
The New Yorker is an American magazine of reportage, commentary, criticism, essays, fiction, satire, cartoons and poetry published by Condé Nast...
. Critics have praised her writing for its keen observations and dry, matter-of-fact irony which chronicle disillusionments of the upper-middle-class generation that grew up in the 1960s. In 1976, she published her first book of short stories, Distortions, and her first novel, Chilly Scenes of Winter, later made into a film. Beattie's style has evolved over the years. In 1998, she published Park City a collection of old and new short stories, about which Christopher Lehman-Haupt wrote in the New York Times:

[The stories] are arranged chronologically, which allows the reader to trace the development of the author's technique. It also lets one see the contrast between the latest stories and the earliest, an experience of sufficient subtlety and complexity to reduce one in this limited space to the following gross generalizations: Gone is the deadpan style of the early and middle stories, in which Ms. Beattie lays out on a dissecting table the behavior of her disaffected post-counterculture yuppies and then leaves it up to the reader to do the anatomizing. Gone, too, are the stabs of lyricism of the middle period, particularly the endings that try poetically to recapitulate the story's action but feel tacked on and artificial. .. In the best of these stories, Ms. Beattie's ability both to commit herself and to knit her commitment into the finest needlework of her artistry contrasts sharply with the irritating moral passivity of her earlier work.

Her first novel, Chilly Scenes of Winter
Chilly Scenes of Winter
Chilly Scenes of Winter is Ann Beattie's first novel, published in 1976. It was adapted into a film, also called Chilly Scenes of Winter, which was released in 1979. Charles is obsessively in love with Laura, a married woman, and must plow through his dull daily life while yearning for her....
(1976), was adapted as a film alternatively titled Chilly Scenes of Winter or Head Over Heels in 1979 by Joan Micklin Silver
Joan Micklin Silver
Joan Micklin Silver is an American director.She was born in Omaha, Nebraska and received her B.A. From Sarah Lawrence College....
, starring John Heard, Mary Beth Hurt
Mary Beth Hurt
Mary Beth Hurt is an American actress of stage and screen.-Personal life:Hurt was born Mary Supinger in 1946 in Marshalltown, Iowa, the daughter of Delores Lenore and Forrest Clayton Supinger. Her childhood babysitter was actress Jean Seberg, also a Marshalltown native...
, and Peter Riegert
Peter Riegert
Peter Riegert is an American actor, screenwriter, and film director, best known for his role as Boon from Animal House and crooked New Jersey State Assemblyman Ronald Zellman on the HBO original series The Sopranos.-Early life:...
. The first version was not well received by audiences, though upon its re-release in 1982, with a new title and ending, to match that in book, the movie was successful, and is now considered a cult classic. She was elected a Fellow of the American Academy of Arts and Sciences
American Academy of Arts and Sciences
The American Academy of Arts and Sciences is an independent policy research center that conducts multidisciplinary studies of complex and emerging problems. The Academy’s elected members are leaders in the academic disciplines, the arts, business, and public affairs.James Bowdoin, John Adams, and...
in 2004.

She is married to painter Lincoln Perry. In 2005 the two collaborated on a published retrospective of Perry's paintings. Entitled Lincoln Perry's Charlottesville, the book contains an introductory essay and artist's interview by Beattie. She was previously married to writer David Gates
David Gates (author)
David Gates is an American journalist and novelist. His first novel, Jernigan , about a dysfunctional one-parent family, was a Pulitzer Prize finalist. This was followed by a second novel, Preston Falls , and a short story collection, The Wonders of the Invisible World...
. While she was at the University of Connecticut, she developed a close friendship with Elaine Scarry
Elaine Scarry
Elaine Scarry , a professor of English and American Literature and Language, is the Walter M. Cabot Professor of Aesthetics and the General Theory of Value at Harvard University...
.