Encyclopedia
Animal migration is the relatively long-distance movement of individuals, usually on a seasonal basis. It is a ubiquitous phenomenon, found in all major animal groups, including bird
Bird
Birds are feathered, winged, bipedal, endothermic , egg-laying, vertebrate animals. Around 10,000 living species and 188 families makes them the most speciose class of tetrapod vertebrates. They inhabit ecosystems across the globe, from the Arctic to the Antarctic. Extant birds range in size from...
s, mammal
Mammal
Mammals are members of a class of air-breathing vertebrate animals characterised by the possession of endothermy, hair, three middle ear bones, and mammary glands functional in mothers with young...
s, fish
Fish
Fish are a paraphyletic group of organisms that consist of all gill-bearing aquatic vertebrate animals that lack limbs with digits. Included in this definition are the living hagfish, lampreys, and cartilaginous and bony fish, as well as various extinct related groups...
, reptiles, amphibian
Amphibian
Amphibians , are a class of vertebrate animals including animals such as toads, frogs, caecilians, and salamanders. They are characterized as non-amniote ectothermic tetrapods...
s, insect
Insect
Insects are a class of living creatures within the arthropods that have a chitinous exoskeleton, a three-part body , three pairs of jointed legs, compound eyes, and two antennae...
s, and crustacean
Crustacean
Crustaceans form a very large group of arthropods, usually treated as a subphylum, which includes such familiar animals as crabs, lobsters, crayfish, shrimp, krill and barnacles. The 50,000 described species range in size from Stygotantulus stocki at , to the Japanese spider crab with a leg span...
s. The trigger for the migration may be local climate, local availability of food, the season of the year or for mating reasons. To be counted as a true migration, and not just a local dispersal or irruption, the movement of the animals should be an annual or seasonal occurrence, such as birds migrating
Bird migration
Bird migration is the regular seasonal journey undertaken by many species of birds. Bird movements include those made in response to changes in food availability, habitat or weather. Sometimes, journeys are not termed "true migration" because they are irregular or in only one direction...
south for the winter, or a major habitat change as part of their life, such as young Atlantic salmon
Atlantic salmon
The Atlantic salmon is a species of fish in the family Salmonidae, which is found in the northern Atlantic Ocean and in rivers that flow into the north Atlantic and the north Pacific....
leaving the river of their birth when they have reached a few inches in size.

Migration can take very different forms in different species and as such, there is no simple accepted definition of migration. One of the most commonly used definitions, proposed by Kennedy is


“Migratory behavior is persistent and straightened out movement effected by the animal’s own locomotory exertions or by its active embarkation upon a vehicle. It depends on some temporary inhibition of station keeping responses but promotes their eventual disinhibition and recurrence.”

Migration has also been described as a term that describes the four related concepts : 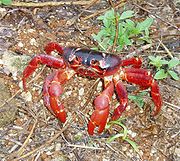 In some insect species, such as the monarch butterfly, the whole migration is not carried out by one individual. Instead the butterflies mate and reproduce on the journey, and successive generations travel the next stage of the migration.

Before the phenomenon of animal migration was understood, various folklore and erroneous explanations sprang up to account for the disappearance or sudden arrival of birds in an area. In Ancient Greece, Aristotle proposed that robins turned into redstarts when summer arrived. The barnacle goose
Barnacle Goose
The Barnacle Goose belongs to the genus Branta of black geese, which contains species with largely black plumage, distinguishing them from the grey Anser species...
was explained in European Medieval bestiaries and manuscripts as either growing like fruit on trees, or developing from goose barnacles on pieces of driftwood. Another example is the swallow, which at various times was suggested to hibernate either underwater, buried in muddy riverbanks, or in hollow trees.