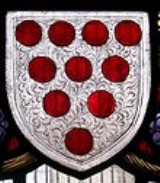 The diocese was founded in around 679 by St Theodore of Canterbury
Theodore of Tarsus
Theodore was the eighth Archbishop of Canterbury, best known for his reform of the English Church and establishment of a school in Canterbury....
at Worcester to minister to the kingdom of the Hwicce
Hwicce
The Hwicce were one of the peoples of Anglo-Saxon England. The exact boundaries of their kingdom are uncertain, though it is likely that they coincided with those of the old Diocese of Worcester, founded in 679–80, the early bishops of which bore the title Episcopus Hwicciorum...
, one of the many Anglo Saxon petty-kingdoms of that time. The original borders of the diocese are believed to be based on those of that ancient kingdom.

Covering an area of 671 square miles (1,737.9 km²) it has parish
Parish
A parish is a territorial unit historically under the pastoral care and clerical jurisdiction of one parish priest, who might be assisted in his pastoral duties by a curate or curates - also priests but not the parish priest - from a more or less central parish church with its associated organization...
es in:


Currently the diocese has 190 parishes with 281 churches and 163 stipendiary clergy.

The diocese is divided into two Archdeacon
Archdeacon
An archdeacon is a senior clergy position in Anglicanism, Syrian Malabar Nasrani, Chaldean Catholic, and some other Christian denominations, above that of most clergy and below a bishop. In the High Middle Ages it was the most senior diocesan position below a bishop in the Roman Catholic Church...
ries: