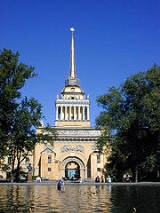 Encyclopedia
Andreyan Zakharov was a Russian architect
Architect
An architect is a person trained in the planning, design and oversight of the construction of buildings. To practice architecture means to offer or render services in connection with the design and construction of a building, or group of buildings and the space within the site surrounding the...
and representative of the Empire style. His designs also alternated neoclassicism
Neoclassical architecture
Neoclassical architecture was an architectural style produced by the neoclassical movement that began in the mid-18th century, manifested both in its details as a reaction against the Rococo style of naturalistic ornament, and in its architectural formulas as an outgrowth of some classicizing...
with eclecticism
Eclecticism
Eclecticism is a conceptual approach that does not hold rigidly to a single paradigm or set of assumptions, but instead draws upon multiple theories, styles, or ideas to gain complementary insights into a subject, or applies different theories in particular cases.It can sometimes seem inelegant or...
. He was born to a family that was employed by the Admiralty board
Russian Admiralty
Admiralty Board was a supreme body for the administration of the Imperial Russian Navy in the Russian Empire, established by Peter the Great on December 12, 1718, and headquartered in the Admiralty building, Saint Petersburg....
, and his greatest work was his renovation and expansion of the Admiralty building. He studied in the Petersburg Academy of Fine Arts from 1767 to 1782 with Alexander Kokorinov
Alexander Kokorinov
Alexander Filippovich Kokorinov was a Russian architect and educator, one of the founders, the first builder, director and rector of the Imperial Academy of Arts in Saint Peterburg. Kokorinov has been house architect of the Razumovsky family and Ivan Shuvalov, the first President of the Academy...
and Ivan Starov
Ivan Starov
Ivan Yegorovich Starov was a Russian architect from St. Petersburg who devised the master plans for Yaroslavl, Voronezh, Pskov, Dnipropetrovsk, Mykolaiv, and many other towns in Russia and Ukraine...
, and afterwards in Paris
Paris
Paris is the capital and largest city in France, situated on the river Seine, in northern France, at the heart of the Île-de-France region...
from 1782 to 1786 with Jean Chalgrin
Jean Chalgrin
Jean-François-Thérèse Chalgrin was a French architect, best known for his design for the Arc de Triomphe, Paris.-Biography:...
. In 1794 he became a full Academician at the Petersburg Academy of Fine Arts. In addition to the Admiralty building he constructed several buildings in Gatchina
Gatchina
Gatchina is a town and the administrative center of Gatchinsky District of Leningrad Oblast, Russia, located south of St. Petersburg by the road leading to Pskov...
and other towns neighboring Saint Petersburg.

In 1805 Zakharov was appointed chief architect of the department of the Navy. His focus was on conducting the management of buildings; including the design, and construction of civil, and industrial buildings. Reconstruction of the building of the Admiralty became the first task of the architect at this post. 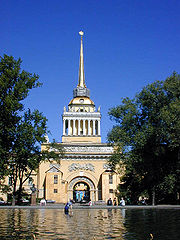 The Admiralty building in Saint Petersburg is the greatest monument of Russian architecture
Russian architecture
Russian architecture follows a tradition whose roots were established in the Eastern Slavic state of Kievan Rus'. After the fall of Kiev, Russian architectural history continued in the principalities of Vladimir-Suzdal, Novgorod, the succeeding states of the Tsardom of Russia, the Russian Empire,...
in the empire style. It is a symbol of the Saint Petersburg and is the architectural center of the city. Zakharov preserved the plan configuration of the preexisting building, the initial building was of 1738, by architect I. K. Korobov. From 1806–1823, Zakharov created a new, grandiose construction, with the main facade extending 407 meters, and a majestic architectural appearance which emphasised its central position in the city with arterials converging from it in three rays. In the center of the building is a monumental spire
Spire
A spire is a tapering conical or pyramidal structure on the top of a building, particularly a church tower. Etymologically, the word is derived from the Old English word spir, meaning a sprout, shoot, or stalk of grass....
d tower, which became the symbol of city. Zakharov preserved this old spire by Korobov and flanked it with two new neoclassical wings. The composition of twin winged facades with smooth walls, strongly protruding porticoes, and deep loggias is symmetrically located along the sides of tower, creating a complex rhythmical alternation of simple and clear volumes.

The building's sculptures added additional value and significance. Decorative reliefs were integrated organically with the large architectural volumes, sculptural groups along the walls emphasise the human scale in contrast to the immensely expanded facades. In the interior of the Admiralties, the vestibule with the main stairway, the meeting halls, and library were preserved. The austerity of the monumental architectural forms was softened by the abundance of light and by the exceptional refinement of finishing.

The earliest works by Zakharov were several buildings in Gatchina such as the Lutheran Church of Saint Peter, Gorbaty bridge, Lviniy bridge, and an aviary. The church was designed in a simplified volume with gothic detailing. In addition to the Gatchina projects were the development of Vasilievsky Island
Vasilievsky Island
Vasilyevsky Island is an island in Saint Petersburg, Russia, bordered by the rivers Bolshaya Neva and Malaya Neva in the south and northeast, and by the Gulf of Finland in the west. Vasilyevsky Island is separated from Dekabristov Island by the Smolenka River...
in Petersburg, and the reconstruction of building of the Petersburg Academy of Science in 1803–1804. This was executed in the tradition of the French school of town planning, where the unity of the ensemble was reached by creating a rhythm of the arrangement of buildings with similar architectural details. At this time Zakharov prepared the architectural plan
Architectural plan
An architectural plan is a plan for architecture, and the documentation of written and graphic descriptions of the architectural elements of a building project including sketches, drawings and details.- Overview :...
s for the Nizhniy Novgorod fair, which were realized by the architect Agustín de Betancourt
Agustín de Betancourt
Agustín de Betancourt y Molina was a prominent Spanish-Canarian engineer, who worked in Spain, France and Russia. His work ranged from steam engines and balloons to structural engineering and urban planning...
in the following years.

Zakharov created projects for developing buildings on Proviantskii island (1806–1808) and Gakernyi port (1806–1809), a number of projects for Kronstadt
Kronstadt
Kronstadt , also spelled Kronshtadt, Cronstadt |crown]]" and Stadt for "city"); is a municipal town in Kronshtadtsky District of the federal city of St. Petersburg, Russia, located on Kotlin Island, west of Saint Petersburg proper near the head of the Gulf of Finland. Population: It is also...
(St. Andrew's Cathedral, built in 1806–1817, which has since been demolished), projects for public structures and churches for the provinces, counties, and cities of Russia with a pronouncedly monumental disposition. The cathedrals in Dnipropetrovsk
Dnipropetrovsk
Dnipropetrovsk or Dnepropetrovsk formerly Yekaterinoslav is Ukraine's third largest city with one million inhabitants. It is located southeast of Ukraine's capital Kiev on the Dnieper River, in the south-central region of the country...
and Izhevsk
Izhevsk
Izhevsk is the capital city of the Udmurt Republic, Russia, situated on the Izh River in the Western Urals. Population: From 1984 to 1987 Izhevsk carried the name Ustinov |Minister of Defense of the USSR]], Marshal of the Soviet Union, Dmitry Ustinov). The city is an important industrial center,...
both derive from Zakharov's cathedral in Kronstadt. Beginning in 1787 he taught at the Academy of Fine Arts, and among his students was the architect A. I. Melnikov.