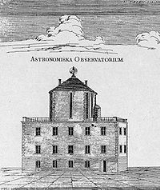 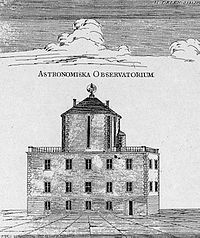 The Uppsala Astronomical Observatory (UAO; Astronomiska observatoriet i Uppsala) is the oldest astronomical observatory in Sweden
Sweden
Sweden , officially the Kingdom of Sweden , is a Nordic country on the Scandinavian Peninsula in Northern Europe. Sweden borders with Norway and Finland and is connected to Denmark by a bridge-tunnel across the Öresund....
. It was founded in 1741, though there was a professorial chair of astronomy
Astronomy
Astronomy is a natural science that deals with the study of celestial objects and phenomena that originate outside the atmosphere of Earth...
at the University of Uppsala from 1593 and the university archives include lecture notes in astronomy from the 1480s.

In the 18th century, Anders Celsius
Anders Celsius
Anders Celsius was a Swedish astronomer. He was professor of astronomy at Uppsala University from 1730 to 1744, but traveled from 1732 to 1735 visiting notable observatories in Germany, Italy and France. He founded the Uppsala Astronomical Observatory in 1741, and in 1742 he proposed the Celsius...
performed his research there and built the first observatory proper in 1741. Celsius managed to get the university consistory
Consistory
-Antiquity:Originally, the Latin word consistorium meant simply 'sitting together', just as the Greek synedrion ....
to buy a large stone house of medieval origin in central Uppsala, where he had an observatory constructed on the rooftop. Celsius both worked and had his personal living quarters in the house. This observatory remained in use until the new observatory, now known as the "old observatory", was built in 1853. The Celsius house itself still remains as one of few older buildings on a modern shopping street, but the observatory on the roof was demolished in 1857.

In the 19th century Anders Jonas Ångström
Anders Jonas Ångström
Anders Jonas Ångström was a Swedish physicist and one of the founders of the science of spectroscopy.-Biography:...
was keeper of the observatory and conducted his experiments in astronomy, physics
Physics
Physics is a natural science that involves the study of matter and its motion through spacetime, along with related concepts such as energy and force. More broadly, it is the general analysis of nature, conducted in order to understand how the universe behaves.Physics is one of the oldest academic...
and optics
Optics
Optics is the branch of physics which involves the behavior and properties of light, including its interactions with matter and the construction of instruments that use or detect it. Optics usually describes the behavior of visible, ultraviolet, and infrared light...
there. His son, Knut Ångström
Knut Ångström
Knut Johan Ångström was a Swedish physicist. He was the son of physicist Anders Jonas Ångström and studied in Uppsala from 1877 to 1884, when he received his licentiat-degree, before going for a short time to the University of Strassburg to study with August Kundt...
, also conducted research on solar radiation at the observatory.