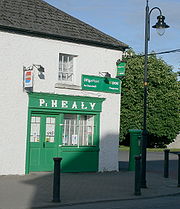 Today An Post remains one of the largest employers in the State, although it has undergone considerable downsizing. It is still loss-making in parts.

The Irish government announced the introduction of a postcode system in Ireland from 2008 though An Post was against the system, saying it is unnecessary. The date for introduction of the system remains open given the new Minister's assertion that additional public consultation is required.

An Post is involved in a number of subsidiaries–some of these it has complete ownership of; others are partly owned by An Post such as the An Post National Lottery Company and the Prize Bond Company Limited.

In 2003, An Post set up a new division to run its post office and transaction services business, entitled An Post Transaction Services or PostTS. It rebranded its post offices network as "Post Office" or "Oifig an Phoist" with a new white and red logo, and introduced banking services in conjunction with Allied Irish Banks
Allied Irish Banks
Allied Irish Banks p.l.c. is a major commercial bank based in Ireland.AIB is one of the so called "big four" commercial banks in the state. The bank has one of the largest branch networks in Ireland; only Bank of Ireland fully rivals it. AIB offers a full range of personal and corporate banking...
. It also introduced a service whereby newsagents could provide some Post Office services, entitled PostPoint. This was thought to have reversed a downward trend in business. PostTS also expanded abroad, with operations in the UK and Spain.

In 2005 PostTS sold its foreign operations. The rebrand of Post Office was partially reversed after some criticism, with the traditional An Post logo restored to Post Offices (the red-and-white symbol has been dropped from Post Offices, but remains in use for the company's website BillPay.ie and for PostPoint). The original PostTS shop front design which featured predominantly English branding "PostOffice" with the location in English, has also been replaced with the Irish language
Irish language
Irish , also known as Irish Gaelic, is a Goidelic language of the Indo-European language family, originating in Ireland and historically spoken by the Irish people. Irish is now spoken as a first language by a minority of Irish people, as well as being a second language of a larger proportion of...
"OifiganPhoist", with the location in both Irish and English (the PostOffice logo can still be seen, but at smaller locations is typically only on a hanging sign, not the shop front). At this time this change is complete at almost all premises.

On 5 October 2006 An Post signed a final agreement for the creation of a joint venture with Fortis
Fortis (finance)
Fortis N.V./S.A. was a company active in insurance, banking and investment management. In 2007 it was the 20th largest business in the world by revenue but after encountering severe problems in the financial crisis of 2008, most of the company was sold in parts, with only insurance activities...
to provide financial services through the Post Office network. The new venture will offer a range of financial products and services to the Irish market, including daily banking, savings products, insurance, mortgages and credit cards. PostPoint and the company's insurance business, One Direct, will become part of the new company, which will have access to the Post Office network.

On 29 April 2007 a press launch was held for the new bank, which is to be known as Postbank.
(legally Postbank Ireland Limited, to distinguish from other similarly named operations such as Deutsche Postbank
Deutsche Postbank
Deutsche Postbank AG is a German retail bank with headquarters in Bonn. Postbank was formed from the demerger of the postal savings division of Deutsche Bundespost in 1990. It became a wholly owned subsidiary of Deutsche Post in 1999, and was partially spun out on the Frankfurt Stock Exchange in 2004...
). The bank's savings and investment products include Solid Saver and Sure Investor. On 12 May 2008 Postbank launched a current account.

Postbank is now a 50:50 venture between An Post and BNP Paribas
BNP Paribas
BNP Paribas S.A. is a global banking group, headquartered in Paris, with its second global headquarters in London. In October 2010 BNP Paribas was ranked by Bloomberg and Forbes as the largest bank and largest company in the world by assets with over $3.1 trillion. It was formed through the merger...
. They offer current accounts, savings accounts, fixed term deposits, credit cards (VISAs in association with MBNA), along with home and car insurance, and life assurance (term and Over 50s).

The closure of the Postbank unit was announced on 26 February 2010. No new customers are being accepted as of this date, and the operation is due to be wound down by the end of December 2010.

TV licensing
Television licensing in the Republic of Ireland
In the Republic of Ireland, a television licence is required for any address at which there is a television set. In 2008, the annual licence fee is €160. Revenue is collected by An Post, the Irish postal service. The bulk of the fee is used to fund Raidió Teilifís Éireann , the state broadcaster...
is administered by An Post. An Post is responsible for collection of revenue, inspection and prosecution in cases of non-payment of the licence on behalf of RTÉ
RTE
RTÉ is the abbreviation for Raidió Teilifís Éireann, the public broadcasting service of the Republic of Ireland.RTE may also refer to:* Recep Tayyip Erdoğan, 25th Prime Minister of Turkey...
.

In 2009, An Post sponsored a national and international postcard project, called C Both Sides
C Both Sides
C Both Sides is a collective art project that started in 2006 by artists Teresa Doyle and Edel O Reilly Flynn in association with Westmeath County Council. The project consisted of people being invited to send postcards from all over Ireland to Doyle and O Reilly Flynn's addresses which were then...
. It ran for a year, with the public being invited to create postcards on different themes. They were then displayed around the country.