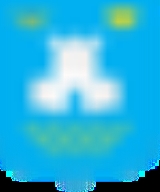 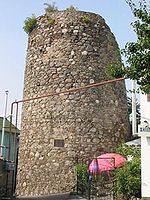 Alushta is a resort town in Crimea
Crimea
Crimea , or the Autonomous Republic of Crimea , is a sub-national unit, an autonomous republic, of Ukraine. It is located on the northern coast of the Black Sea, occupying a peninsula of the same name...
, Ukraine
Ukraine
Ukraine is a country in Eastern Europe. It has an area of 603,628 km², making it the second largest contiguous country on the European continent, after Russia...
, founded in the 6th century by Emperor Justinian. It is situated on the Black Sea
Black Sea
The Black Sea is bounded by Europe, Anatolia and the Caucasus and is ultimately connected to the Atlantic Ocean via the Mediterranean and the Aegean seas and various straits. The Bosphorus strait connects it to the Sea of Marmara, and the strait of the Dardanelles connects that sea to the Aegean...
on the road from Gurzuf
Gurzuf
Gurzuf or Hurzuf is a resort in Crimea, Ukraine, on the northern coast of the Black Sea.Gurzuf is a former Crimean Tatar village, now a part of Greater Yalta. It was made famous by Alexander Pushkin who visited the place in 1821. The famous ballet master Marius Petipa died here...
to Sudak
Sudak
Sudak or Sudaq is a small historic town located in Crimea, Ukraine situated to the west of Feodosiya and to the east of Simferopol, the capital of Crimea...
, as well as on the Crimean Trolleybus
Crimean Trolleybus
Crimean Trolleybus Line in Crimea, Ukraine is currently the longest trolleybus line in the world. It is long, and runs between the autonomous republic's capital, Simferopol, and the coastal city of Yalta on the Black Sea....
line.

The area is notable for its rocky terrain. There are also vestiges of a Byzantine defensive tower and a 15th-century Genoese
Republic of Genoa
The Most Serene Republic of Genoa |Ligurian]]: Repúbrica de Zêna) was an independent state from 1005 to 1797 in Liguria on the northwestern Italian coast, as well as Corsica from 1347 to 1768, and numerous other territories throughout the Mediterranean....
fortress. The town was called Aluston (Αλουστον) in the Byzantine Empire
Byzantine Empire
The Byzantine Empire was the Eastern Roman Empire during the periods of Late Antiquity and the Middle Ages, centred on the capital of Constantinople. Known simply as the Roman Empire or Romania to its inhabitants and neighbours, the Empire was the direct continuation of the Ancient Roman State...
, and Lusta during the Genoese rule. Adam Mickiewicz
Adam Mickiewicz
Adam Bernard Mickiewicz ) was a Polish poet, publisher and political writer of the Romantic period. One of the primary representatives of the Polish Romanticism era, a national poet of Poland, he is seen as one of Poland's Three Bards and the greatest poet in all of Polish literature...
dedicated two of his Crimean Sonnets to Alushta.

Alushta is twinned
Town twinning
Twin towns and sister cities are two of many terms used to describe the cooperative agreements between towns, cities, and even counties in geographically and politically distinct areas to promote cultural and commercial ties.- Terminology :...
with: Santa Cruz
Santa Cruz, California
Santa Cruz is the county seat and largest city of Santa Cruz County, California in the US. As of the 2010 U.S. Census, Santa Cruz had a total population of 59,946...
, United States
United States
The United States of America is a federal constitutional republic comprising fifty states and a federal district...
Dzierżoniów
Dzierzoniów
Dzierżoniów is a town in southwestern Poland. It is situated in Lower Silesian Voivodeship...
, Poland
Poland
Poland , officially the Republic of Poland , is a country in Central Europe bordered by Germany to the west; the Czech Republic and Slovakia to the south; Ukraine, Belarus and Lithuania to the east; and the Baltic Sea and Kaliningrad Oblast, a Russian exclave, to the north...