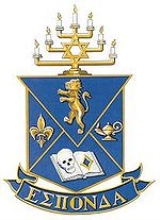 Encyclopedia
Alpha Epsilon Pi the Global Jewish college fraternity
Fraternities and sororities
Fraternities and sororities are fraternal social organizations for undergraduate students. In Latin, the term refers mainly to such organizations at colleges and universities in the United States, although it is also applied to analogous European groups also known as corporations...
, has 155 active chapters in the United States
United States
The United States of America is a federal constitutional republic comprising fifty states and a federal district...
, Canada
Canada
Canada is a North American country consisting of ten provinces and three territories. Located in the northern part of the continent, it extends from the Atlantic Ocean in the east to the Pacific Ocean in the west, and northward into the Arctic Ocean...
, United Kingdom and Israel
Israel
The State of Israel is a parliamentary republic located in the Middle East, along the eastern shore of the Mediterranean Sea...
with a membership of over 9,000 undergraduates. Alpha Epsilon Pi is a Jewish fraternity, though non-discriminatory
Religious discrimination
Religious discrimination is valuing or treating a person or group differently because of what they do or do not believe.A concept like that of 'religious discrimination' is necessary to take into account ambiguities of the term religious persecution. The infamous cases in which people have been...
and open to all who are willing to espouse its purpose and values.

Charles C. Moskowitz had just transferred to New York University’s School of Commerce from the City College of New York
City College of New York
The City College of the City University of New York is a senior college of the City University of New York , in New York City. It is also the oldest of the City University's twenty-three institutions of higher learning...
. Several fraternities at the School of Commerce expressed interest in him and one gave him a bid. The name of that fraternity is unknown. When Charles asked if his close Jewish friends could join as well, he was told that the invitation was for him alone. At this point, the group of 11 men began meeting regularly in a German rathskeller
Rathskeller
Ratskeller is a name in German-speaking countries for a bar or restaurant located in the basement of a city hall or nearby...
. Official school recognition of AEPi was granted on November 7.

The founding members always intended for AEPi to be a national fraternity. Long before the second chapter, the NYU group was designated "Alpha Chapter." In 1917, the local fraternity Phi Tau
Phi Tau
Phi Tau is a coeducational fraternity at Dartmouth College in Hanover, New Hampshire, USA. Founded in 1905 as the Tau Chapter of Phi Sigma Kappa, the organization separated from the national fraternity in 1956 over a dispute regarding the segregationist and antisemitic membership policies of the...
at Cornell University
Cornell University
Cornell University is an Ivy League university located in Ithaca, New York, United States. It is a private land-grant university, receiving annual funding from the State of New York for certain educational missions...
became the Beta Chapter of AEPi.

To Brothers it is known as the "Cofa". The coat of arms
Coat of arms
A coat of arms is a unique heraldic design on a shield or escutcheon or on a surcoat or tabard used to cover and protect armour and to identify the wearer. Thus the term is often stated as "coat-armour", because it was anciently displayed on the front of a coat of cloth...
of Alpha Epsilon Pi contains a number of symbolic objects, the true meaning of which is only revealed to brothers during their initiation into the fraternity.

AEPi has specific titles that are used for its officers, many correspond to Fraternal tradition.

AEPi is governed in a diamond model. It consists of the AEPi Foundation, The Fiscal Control Board, the Executive Office and the Supreme Board of Governors.

The AEPi Foundation is the charitable arm of the organization. It directs the philanthropic affairs of the fraternity, supports projects of a Jewish and fraternal nature, and provides support for the individual chapters and colonies. They work very closely with the Director of Jewish Programming.

The Fiscal Control Board (FCB) is responsible for the financial well-being of the organization. It oversees the financial decisions of the apparatus, and makes recommendations to the Supreme Board of Governors. Each member of the FCB is also on the Board of Directors of the AEPi Foundation.

The Executive Office is made up of the professional staff that oversees the day to day functions of the fraternity. The staff consists of the housing coordinator, the leadership consultants, the Director of Jewish Programming, and the Executive Director.

The Board of Governors makes the majority of decisions for the fraternity's well-being and meets semi-annually to discuss matters of importance, including the granting of charters.

The fraternity currently has 148 active chapters and colonies in ten of the twelve Big Ten Conference
Big Ten Conference
The Big Ten Conference is the United States' oldest Division I college athletic conference. Its twelve member institutions are located primarily in the Midwestern United States, stretching from Nebraska in the west to Pennsylvania in the east...
schools, seven of the eight Ivy League
Ivy League
The Ivy League is an athletic conference comprising eight private institutions of higher education in the Northeastern United States. The conference name is also commonly used to refer to those eight schools as a group...
schools, and eight of the ten University of California
University of California
The University of California is a public university system in the U.S. state of California. Under the California Master Plan for Higher Education, the University of California is a part of the state's three-tier public higher education system, which also includes the California State University...
campuses. It is also the largest 'national' fraternity in Canada
Canada
Canada is a North American country consisting of ten provinces and three territories. Located in the northern part of the continent, it extends from the Atlantic Ocean in the east to the Pacific Ocean in the west, and northward into the Arctic Ocean...
, California
California
California is a state located on the West Coast of the United States. It is by far the most populous U.S. state, and the third-largest by land area...
, New York
New York
New York is a state in the Northeastern region of the United States. It is the nation's third most populous state. New York is bordered by New Jersey and Pennsylvania to the south, and by Connecticut, Massachusetts and Vermont to the east...
, and Massachusetts
Massachusetts
The Commonwealth of Massachusetts is a state in the New England region of the northeastern United States of America. It is bordered by Rhode Island and Connecticut to the south, New York to the west, and Vermont and New Hampshire to the north; at its east lies the Atlantic Ocean. As of the 2010...
. The fraternity established the Aleph chapter in Israel during the Spring of 2009, located in the Interdisciplinary Center
Interdisciplinary Center
The Interdisciplinary Center, Herzliya is a private Israeli college located in Herzliya, Israel.The languages of instruction in the Interdisciplinary Center are Hebrew and English.-History:...
in Herzliya
Herzliya
Herzliya is a city in the central coast of Israel, at the western part of the Tel Aviv District. It has a population of 87,000 residents. Named after Theodor Herzl, the founder of modern Zionism, Herzliya covers an area of 26 km²...
. It has since expanded to other Universities in Israel. In 2011, the fraternity expanded to the United Kingdom establishing a colony at St. Andrews
University of St Andrews
The University of St Andrews, informally referred to as "St Andrews", is the oldest university in Scotland and the third oldest in the English-speaking world after Oxford and Cambridge. The university is situated in the town of St Andrews, Fife, on the east coast of Scotland. It was founded between...
in the Spring, followed by Birmingham
University of Birmingham
The University of Birmingham is a British Redbrick university located in the city of Birmingham, England. It received its royal charter in 1900 as a successor to Birmingham Medical School and Mason Science College . Birmingham was the first Redbrick university to gain a charter and thus...
and Leeds
University of Leeds
The University of Leeds is a British Redbrick university located in the city of Leeds, West Yorkshire, England...
in the Fall.