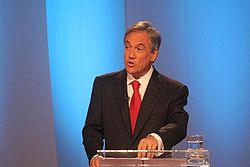 The Alliance for Chile , also known simply as The Alliance , was a coalition of right-wing Chile
Chile
Chile ,officially the Republic of Chile , is a country in South America occupying a long, narrow coastal strip between the Andes mountains to the east and the Pacific Ocean to the west. It borders Peru to the north, Bolivia to the northeast, Argentina to the east, and the Drake Passage in the far...
an political parties.The Alliance was replaced in 2009 by the Coalition for Change
Coalition for Change
The Coalition for Change is a presidential and parliamentary electoral coalition that groups the supporters of President Sebastián Piñera for the 2009-2010 Chilean election...
.

The Alliance had several names through its history: