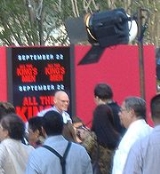 Encyclopedia
All the King's Men is a 2006 film adaptation of the 1946 Pulitzer Prize
Pulitzer Prize
The Pulitzer Prize is a U.S. award for achievements in newspaper and online journalism, literature and musical composition. It was established by American publisher Joseph Pulitzer and is administered by Columbia University in New York City...
-winning novel All the King's Men
All the King's Men
All the King's Men is a novel by Robert Penn Warren first published in 1946. Its title is drawn from the nursery rhyme Humpty Dumpty. In 1947 Warren won the Pulitzer Prize for All the King's Men....
by Robert Penn Warren
Robert Penn Warren
Robert Penn Warren was an American poet, novelist, and literary critic and was one of the founders of New Criticism. He was also a charter member of the Fellowship of Southern Writers. He founded the influential literary journal The Southern Review with Cleanth Brooks in 1935...
. It was directed by Steven Zaillian
Steven Zaillian
Steven Ernest Bernard Zaillian is an American screenwriter, film director, film editor, producer, and founder of Film Rites, a film production company. He won an Academy Award for his screenplay for Schindler's List and he has been nominated two times for Awakenings and Gangs of New York...
, who also produced and scripted.

The story is about the life of Willie Stark (played by Sean Penn
Sean Penn
Sean Justin Penn is an American actor, screenwriter and film director, also known for his political and social activism...
), a fictional character resembling Louisiana governor Huey Long
Huey Long
Huey Pierce Long, Jr. , nicknamed The Kingfish, served as the 40th Governor of Louisiana from 1928–1932 and as a U.S. Senator from 1932 to 1935. A Democrat, he was noted for his radical populist policies. Though a backer of Franklin D...
. The film co-stars Jude Law
Jude Law
David Jude Heyworth Law , known professionally as Jude Law, is an English actor, film producer and director.He began acting with the National Youth Music Theatre in 1987, and had his first television role in 1989...
, Kate Winslet
Kate Winslet
Kate Elizabeth Winslet is an English actress and occasional singer. She has received multiple awards and nominations. She was the youngest person to accrue six Academy Award nominations, and won the Academy Award for Best Actress for The Reader...
, Anthony Hopkins
Anthony Hopkins
Sir Philip Anthony Hopkins, KBE , best known as Anthony Hopkins, is a Welsh actor of film, stage and television...
, James Gandolfini
James Gandolfini
James J. Gandolfini, Jr. is an Italian American actor. He is best known for his role as Tony Soprano in the HBO TV series The Sopranos, about a troubled crime boss struggling to balance his family life and career in the Mafia...
, Mark Ruffalo
Mark Ruffalo
Mark Alan Ruffalo is an American actor, director, producer and screenwriter. He starred in films such as Eternal Sunshine of the Spotless Mind, Zodiac, Shutter Island, Just Like Heaven, You Can Count on Me and The Kids Are All Right for which he received an Academy Award nomination for Best...
, Patricia Clarkson
Patricia Clarkson
Patricia Davies Clarkson is an American actress. After studying drama on the East Coast, Clarkson launched her acting career in 1985, and has worked steadily in both film and television. She twice won the Emmy for Outstanding Guest Actress in Six Feet Under...
and Jackie Earle Haley
Jackie Earle Haley
Jackie Earle Haley is an American film actor. Establishing himself from child actor to adult Academy Award-nominee, he is perhaps best known for his roles as Moocher in Breaking Away, Kelly Leak in The Bad News Bears, pedophile Ronnie McGorvey in Little Children, the vigilante Rorschach in...
in his first film since Maniac Cop III: Badge of Silence thirteen years prior.

All the King's Men had previously been adapted by Robert Rossen
Robert Rossen
Robert Rossen was an American screenwriter, film director, and producer whose film career spanned almost three decades. His 1949 film All the King's Men won Oscars for Best Picture, Best Actor and Best Supporting Actress, while Rossen was nominated for an Oscar as Best Director...
in 1949. Although it does not follow the 1949 film
All the King's Men (1949 film)
All the King's Men is a 1949 drama film based on the Robert Penn Warren novel of the same name. It was directed by Robert Rossen and starred Broderick Crawford in the role of Willie Stark.-Plot:...
's narrative and is more faithful to the novel than the earlier movie, the 2006 film is often considered a remake of the 1949 version. According to IMDb, Zaillian never saw the original film, and adapted the screenplay solely from Warren's novel.

Louisiana
Louisiana
Louisiana is a state located in the southern region of the United States of America. Its capital is Baton Rouge and largest city is New Orleans. Louisiana is the only state in the U.S. with political subdivisions termed parishes, which are local governments equivalent to counties...
newspaper reporter Jack Burden takes a personal interest in Willie Stark, an idealistic small-town lawyer. Circumstances develop that result in Stark's being urged to run for governor by a local political leader, Tiny Duffy. Jack has been raised around politics. He is the former lover of Anne Stanton, whose father was once governor. Jack was raised by Judge Irwin, his stepfather, an honorable man.

In time, Jack and political strategist Sadie Burke reveal to Stark that he is actually a dupe in the governor's race, expected to split the vote, spout the party line and lose. This opens his eyes to the realities of politics, and he vows not to be fooled again. He defies Duffy publicly and begins to give speeches with straightforward talk that the public appreciates. He becomes governor in the next election, using any means necessary. Duffy now works for him as lieutenant governor. He also has a silent, menacing driver and bodyguard called Sugar Boy. Finally, he encourages Jack to come work for him as an adviser.

Judge Irwin disapproves, seeing Stark as an opportunist. Anne Stanton seems to agree and so does her brother, Dr. Adam Stanton. Willie Stark is a persuasive man, however, and knows how to get his way. He has a pet project, building a new hospital, and convinces Dr. Stanton to run it for him. He also begins an affair with Anne Stanton, provoking Sadie's jealousy and Jack's disappointment.

Criticized publicly by Judge Irwin and embroiled in increasing political controversy, Stark demands that Jack dig up dirt on the judge to be used against him. Jack insists that no such dirt exists, but he does manage to uncover the fact that many years ago, Judge Irwin accepted a bribe. Following this revelation, the judge commits suicide.

Stark has by now become a ruthless tyrant, popular with the voters but a charlatan to those who really know him. Dr. Stanton discovers that even the hospital is a front for the governor's own personal and political gain. He lies in wait at the state capitol, and assassinates Stark, but is then shot and killed by Stark`s bodyguard. 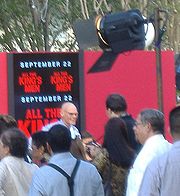 The film was a failure both with critics and at the box office, in spite of its high-profile cast, direction, and production team. Few critics endorsed it, although it did garner strong Oscar
Academy Awards
An Academy Award, also known as an Oscar, is an accolade bestowed by the American Academy of Motion Picture Arts and Sciences to recognize excellence of professionals in the film industry, including directors, actors, and writers...
"buzz" before its initial opening.

Rotten Tomatoes
Rotten Tomatoes
Rotten Tomatoes is a website devoted to reviews, information, and news of films—widely known as a film review aggregator. Its name derives from the cliché of audiences throwing tomatoes and other vegetables at a poor stage performance...
garneshed an 11% "Rotten" based on 153 reviews with a consensus stating "With its star-studded cast and hallowed source material (the novel of the same name won the Pulitzer Prize, and the 1949 original film took home a best picture Oscar), All the King's Men has the pedigree of a prestige picture. Don't be fooled. With a scenery-chewing performance from Sean Penn, an absence of political insight, and an overall lack of narrative cohesiveness, Men gives Oscar bait a bad name."

Richard Schickel
Richard Schickel
Richard Warren Schickel is an American author, journalist, and documentary filmmaker. He is a film critic for Time magazine, having also written for Life magazine and the Los Angeles Times Book Review....
(Time Magazine) liked the movie, arguing that "it's much more faithful to the tone of the novel" than the original.

Kenneth Turan
Kenneth Turan
Kenneth Turan is an American film critic and Lecturer in the Master of Professional Writing Program at the University of Southern California.-Background:...
(Los Angeles Times
Los Angeles Times
The Los Angeles Times is a daily newspaper published in Los Angeles, California, since 1881. It was the second-largest metropolitan newspaper in circulation in the United States in 2008 and the fourth most widely distributed newspaper in the country....
) praised the film's "undeniable moral seriousness" and the actors' "exceptional ensemble work." He argued that Zaillian's script and direction "expertly extracted the core of this greatest of American political novels, a work that is both of its time and outside it."

A. O. Scott
A. O. Scott
Anthony Oliver Scott, known as A. O. Scott , is an American journalist and critic. He is a chief film critic for The New York Times, along with Manohla Dargis.-Background and education:...
(New York Times) expressed disappointment with the film: "Nothing in the picture works. It is both overwrought and tedious, its complicated narrative bogging down in lyrical voiceover, long flashbacks and endless expository conversations between people speaking radically incompatible accents."

Michael Medved
Michael Medved
Michael Medved is an American radio host, author, political commentator and film critic. His Seattle, Washington-based nationally syndicated talk show, The Michael Medved Show, airs throughout the U.S...
gave All the King's Men two stars (out of four) calling it "depressing and disappointing", a "stodgy melodrama
Melodrama
The term melodrama refers to a dramatic work that exaggerates plot and characters in order to appeal to the emotions. It may also refer to the genre which includes such works, or to language, behavior, or events which resemble them...
" and a "pointless, pretentious, plodding period-piece".

Recently, the film was featured in Nathan Rabin
Nathan Rabin
Nathan Rabin is an American film and music critic. A graduate of the University of Wisconsin–Madison, Rabin was the first head writer for The A.V. Club, a position he continues to hold today....
's ongoing blog
Blog
A blog is a type of website or part of a website supposed to be updated with new content from time to time. Blogs are usually maintained by an individual with regular entries of commentary, descriptions of events, or other material such as graphics or video. Entries are commonly displayed in...
feature for The Onion's
The Onion
The Onion is an American news satire organization. It is an entertainment newspaper and a website featuring satirical articles reporting on international, national, and local news, in addition to a non-satirical entertainment section known as The A.V. Club...
A.V. Club
The A.V. Club
The A.V. Club is an entertainment newspaper and website published by The Onion. Its features include reviews of new films, music, television, books, games and DVDs, as well as interviews and other regular offerings examining both new and classic media and other elements of pop culture. Unlike its...
, "My Year of Flops". Of three categories (failure, fiasco, or secret success), he labeled All the King's Men as a failure and said of the film: "Zaillian’s dud manages the formidable feat of being at once histrionic and agonizingly dull, hysterically over-the-top yet strangely lifeless."

Zaillian was clearly stunned by the poor critical and box-office results of this film, which opened with only $3.8 million and barely made $7.2 million at the end of its run in US theaters. The weekend's other new wide release, Jackass Number Two, made $28.1 million.


Differences between the book and the screenplay