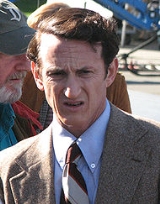 Overview
Sean Justin Penn is an American actor, screenwriter and film director, also known for his political and social activism. He is a two-time Academy Award
Academy Award for Best Actor
Performance by an Actor in a Leading Role is one of the Academy Awards of Merit presented annually by the Academy of Motion Picture Arts and Sciences to recognize an actor who has delivered an outstanding performance while working within the film industry...
winner for his roles in Mystic River
Mystic River (film)
Mystic River is a 2003 American drama film directed, co-produced and scored by Clint Eastwood, starring Sean Penn, Tim Robbins, Kevin Bacon, Laurence Fishburne, Marcia Gay Harden, Laura Linney and Emmy Rossum. The film was written by Brian Helgeland, based on Dennis Lehane's novel of the same...
(2003) and Milk
Milk (film)
Milk is a 2008 American biographical film on the life of gay rights activist and politician Harvey Milk, who was the first openly gay person to be elected to public office in California, as a member of the San Francisco Board of Supervisors...
(2008), as well as the recipient of a Golden Globe Award
Golden Globe Award for Best Actor - Motion Picture Drama
The Golden Globe Award for Best Actor - Motion Picture - Drama was first awarded by the Hollywood Foreign Press Association as a separate category in 1951...
for the former and a Screen Actors Guild Award for the latter.

When you have a precedent set like that, and you have somebody, George Tenet, acknowledging in his book that he knew that the administration was deceiving the American people into a situation that is murdering young men and women from this country and others, that George Tenet and Dick Cheney and Condoleezza Rice and George W. Bush|George Bush, et al., should be in fucking jail.

Thank you, you Commie, homo-loving sons of guns.