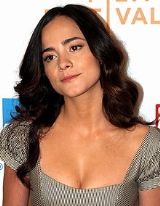 Encyclopedia
Alice Braga Moraes is a Brazilian actress. She has appeared in several Brazilian films, most notably as Angélica in 2002's highly acclaimed City of God and as Karina in 2005's Lower City. She has also starred in the Hollywood movies I Am Legend
I Am Legend (film)
I Am Legend is a 2007 post-apocalyptic science fiction film directed by Francis Lawrence and starring Will Smith. It is the third feature film adaptation of Richard Matheson's 1954 novel of the same name, following 1964's The Last Man on Earth and 1971's The Omega Man. Smith plays virologist Robert...
(2007), Repo Men and Predators (both 2010).

Alice Braga Moraes was born in São Paulo
São Paulo
São Paulo is the largest city in Brazil, the largest city in the southern hemisphere and South America, and the world's seventh largest city by population. The metropolis is anchor to the São Paulo metropolitan area, ranked as the second-most populous metropolitan area in the Americas and among...
, Brazil. She was raised in a Catholic family. Her exposure to the world of acting came at an early age. Both her mother, Ana Braga, and aunt, Sônia Braga
Sônia Braga
Sônia Maria Campos Braga is a Brazilian actress. She has been nominated for both a Golden Globe Award and an Emmy Award.-Early life:...
, are actresses, and Braga often accompanied them to film sets. She began her career by appearing in school plays and commercials. Her first commercial was for yoghurt when she was eight years old. As a teenager she began pursuing roles in television and movies. She speaks fluent Portuguese, Spanish and English.

In 1998, Braga debuted in a Portuguese-language short called Trampolim, then returned to her schooling. Her big break came in 2002, when she was cast as Angélica in the critically acclaimed film, City of God, for which she received a Best Supporting Actress nomination from the Cinema Brazil Grand Prize. She took more time off, and attended university while appearing in a pair of well-regarded South American films—2005’s Lower City and 2006’s Only God Knows—and also played a role in the popular Brazilian television program Carandiru, Outras Historias. Braga made her English-language debut in 2006 with a starring role with Brendan Fraser
Brendan Fraser
Brendan James Fraser is a Canadian-American film and stage actor. Fraser portrayed Rick O'Connell in the three-part Mummy film series , and is known for his comedic and fantasy film leading roles in major Hollywood films, including Encino Man , George of the Jungle , Dudley Do-Right , Monkeybone ,...
, Mos Def
Mos Def
Dante Terrell Smith is an American actor and Emcee known by the stage names Mos Def and Yasiin Bey. He started his hip hop career in a group called Urban Thermo Dynamics, after which he appeared on albums by Da Bush Babees and De La Soul. With Talib Kweli, he formed the duo Black Star, which...
, and Catalina Sandino Moreno
Catalina Sandino Moreno
Catalina Sandino Moreno is a Colombian actress. She was nominated for an Academy Award for Best Actress for her role in Maria Full of Grace .-Life and career:...
in Journey to the End of Night
Journey to the End of the Night (2006 film)
Journey to the End of the Night is a 2006 film directed by Eric Eason starring Brendan Fraser, Mos Def, Scott Glenn, Alice Braga and Catalina Sandino Moreno.- Synopsis :...
, which premiered at the 5th Annual Tribeca Film Festival
Tribeca Film Festival
The Tribeca Film Festival is a film festival founded in 2002 by Jane Rosenthal, Robert De Niro and Craig Hatkoff in a response to the September 11, 2001 attacks on the World Trade Center and the consequent loss of vitality in the TriBeCa neighborhood in Lower Manhattan.The mission of the festival...
. In 2007, Braga was cast in the Will Smith
Will Smith
Willard Christopher "Will" Smith, Jr. , also known by his stage name The Fresh Prince, is an American actor, producer, and rapper. He has enjoyed success in television, film and music. In April 2007, Newsweek called him the most powerful actor in Hollywood...
blockbuster I Am Legend
I Am Legend (film)
I Am Legend is a 2007 post-apocalyptic science fiction film directed by Francis Lawrence and starring Will Smith. It is the third feature film adaptation of Richard Matheson's 1954 novel of the same name, following 1964's The Last Man on Earth and 1971's The Omega Man. Smith plays virologist Robert...
, and the drama Crossing Over
Crossing Over (film)
Crossing Over is a 2009 American independent drama film about illegal immigrants of different nationalities struggling to achieve legal status in Los Angeles. The film deals with the border, document fraud, the asylum and green card process, work-site enforcement, naturalization, the office of...
(which stars Harrison Ford
Harrison Ford
Harrison Ford is an American film actor and producer. He is famous for his performances as Han Solo in the original Star Wars trilogy and as the title character of the Indiana Jones film series. Ford is also known for his roles as Rick Deckard in Blade Runner, John Book in Witness and Jack Ryan in...
, Ray Liotta
Ray Liotta
[File:Ray Liotta is an American actor, best known for his portrayal of Henry Hill in the crime-drama Goodfellas, directed by Martin Scorsese and his role as Shoeless Joe Jackson in Field of Dreams...
, and Ashley Judd
Ashley Judd
Ashley Judd is an American television and film actress, who has played lead roles in films including Ruby in Paradise, Kiss the Girls, Double Jeopardy, Where the Heart Is and High Crimes...
). She also appeared in the 2008 David Mamet
David Mamet
David Alan Mamet is an American playwright, essayist, screenwriter and film director.Best known as a playwright, Mamet won a Pulitzer Prize and received a Tony nomination for Glengarry Glen Ross . He also received a Tony nomination for Speed-the-Plow . As a screenwriter, he received Oscar...
film Redbelt
Redbelt
Redbelt is a 2008 martial arts film written and directed by David Mamet and starring Chiwetel Ejiofor. The film opened in wide release in the United States and Canada on May 9, 2008.-Plot:...
alongside Chiwetel Ejiofor
Chiwetel Ejiofor
Chiwetelu Umeadi "Chiwetel" Ejiofor, OBE is an English actor of stage and screen. He has received numerous acting awards and award nominations, including the 2006 BAFTA Awards Rising Star, three Golden Globe Awards' nominations, and the 2008 Laurence Olivier Award for Best Actor for his...
. Braga portrayed Beth in the science-fiction film Repo Men. She starred as Isabelle in Antal Nimrod's Predators, which was shot and produced by Troublemaker Studios and Robert Rodriguez
Robert Rodriguez
Robert Anthony Rodríguez is an American film director, screenwriter, producer, cinematographer, editor and musician. He shoots and produces many of his films in his native Texas and Mexico. He has directed such films as Desperado, From Dusk till Dawn, The Faculty, Spy Kids, Sin City, Planet...
.