Rummikub was invented by Ephraim Hertzano
Ephraim Hertzano
Ephraim Hertzano was a board game designer born in Romania. He immigrated to Israel where he founded the games company Hertzano. Hertzano's most famous game creation is Rummikub..- Biography :Hertzano was a Jewish Israeli....
, a Romanian
Romanians
The Romanians are an ethnic group native to Romania, who speak Romanian; they are the majority inhabitants of Romania....
-born Jew, who immigrated
Aliyah
Aliyah is the immigration of Jews to the Land of Israel . It is a basic tenet of Zionist ideology. The opposite action, emigration from Israel, is referred to as yerida . The return to the Holy Land has been a Jewish aspiration since the Babylonian exile...
to Mandate Palestine
Mandate Palestine
Mandate Palestine existed while the British Mandate for Palestine, which formally began in September 1923 and terminated in May 1948, was in effect...
in the early 1930s. He hand-made the first sets with his family in the backyard of his home. The game combines elements of rummy
Rummy
Rummy is a group of card games notable for gameplay based on the matching of similar playing cards. The Mexican game of Conquian is considered by David Parlett to be ancestral to all rummy games, which itself is derived from a Chinese game called Khanhoo and, going even further back,...
, dominoes
Dominoes
Dominoes generally refers to the collective gaming pieces making up a domino set or to the subcategory of tile games played with domino pieces. In the area of mathematical tilings and polyominoes, the word domino often refers to any rectangle formed from joining two congruent squares edge to edge...
, mah-jongg and chess
Chess
Chess is a two-player board game played on a chessboard, a square-checkered board with 64 squares arranged in an eight-by-eight grid. It is one of the world's most popular games, played by millions of people worldwide at home, in clubs, online, by correspondence, and in tournaments.Each player...
. Hertzano sold the first sets door-to-door and on a consignment basis at small shops. Over the years, the family licensed it to other countries and it became Israel’s #1 export game. In 1977, it became a bestselling game in the United States.

Hertzano's 'Official Rummikub Book', published in 1978, describes three different versions of the game: American, Sabra and International. Modern Rummikub sets include only the Sabra version rules, with no mention of the others, and there are variations in the rules between publishers.

The game was first made by Lemada Light Industries Ltd
Lemada
Lemada Light Industries Inc. is an Israeli game manufacturer. It was founded in 1978 by Mariana and Micha Hertzano, the children of Ephraim Hertzano , and it is still run by the Hertzano family. The head office is located in Arad....
, founded by Hertzano. "Six handed" (a game with 6 colors) is available in Germany. It tends to be more fun for larger parties, but less challenging, as it is much easier to make a set of 3 different colors when there are 6 available. 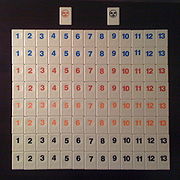 Rummikub's main component is a pool of tiles, consisting of 104 number tiles and two or more joker
Joker (playing card)
Joker is a special type of playing card found in most modern decks, or else a type of tile in some Mahjong game sets.-Name:It is believed that the term "Joker" comes from a mispronunciation of Jucker, the German/Alsatian name for the game Euchre. The card was originally introduced in about 1860 for...
tiles. The number tiles range in value from one to thirteen, in four colors ( black, yellow, blue and red, or other). Each combination of color and number is represented twice. Players each have a rack (container) to store tiles, without revealing the face of the tiles to the other players.

Different versions of Rummikub are played, and house rules are often used. For example, one version uses two decks of 52 tiles, plus one joker per person. Cards could have their face value, with ace counting for 1, jack for 11, queen for 12 and king for 13. It is advisable to use small cards, because space on the playing table is limited, and to deal the cards (rather than taking them from a pool) unless the backs of both decks have the same color and motif. Cards are less likely than tiles to read as upside down for any given player; however, large hands may prove slightly difficult to hold, especially for children.

Tiles are shuffled together and either placed into a bag, or spread out face down across the table. Each player draws and reveals one tile. The player whose tile has the highest number value will start the game. Tiles are returned to the pool, and players in turn collect 14 random tiles and arrange them on their racks. Play then begins with the starting player, and proceeds in a clockwise direction.

The following explanation is based on the rules in the 1998 Pressman American edition; other editions of the rules may have significant differences.

For a player's first move, he must play a set with a value of at least 30 points. Point values are taken from the face value of each tile played, with the joker (if played) assuming the value of the tile it is being used in place of. The player may not use other players' tiles to make the initial 30 or more. A player's first move is known as the "initial meld". The initial meld cannot build on previously played tiles (for example, a joker on the table cannot be retrieved before the initial meld). If a player cannot make an initial meld, he must pick up a single tile from the pool and add it to his rack. Play then proceeds to the next player.

Once a player has made his initial meld, he can, on each turn, play one or more tiles from his rack, making or adding to groups and/or runs. If the player cannot (or chooses not to) play any tiles, he must pick one random tile from the pool and add it to his rack.

All tiles in play must be arranged in sets with at least three tiles. The two valid set types are called runs and groups.

Players may play tiles by amending sets already in play. The only limit to the length of a run is the extremes of the tile values. Groups are limited to four because colors may not repeat within a group. If player has a play in hand it must be played or seven tiles must be drawn.

During a player's turn, sets of tiles that have already been played may be manipulated to allow more tiles to be played. At the end of the turn, all played tiles must be in valid sets.

Shifting a run : Players may add the appropriate tile to either end of a run and remove a tile from the other end for use elsewhere. If red 3, 4, and 5 have already been played, a player may add the red 6 to the end and remove the 3 for use elsewhere.
Splitting a run : Players may split long runs and insert the corresponding tiles in the middle. Thus, if blue 6, 7, 8, 9, and 10 are already a run, the player may insert his own 8 to make two runs: 6, 7, 8 and 8, 9, 10.
Substituting in a group : Players may replace any of the tiles in a three-tile group with a tile of the fourth color and the same value. If blue 6, red 6, and orange 6 are already a group, the player may add the black 6 and remove any one of the other three for use elsewhere.
Removing tiles : So long as the remaining tiles form a valid run, tiles can be removed from the ends of runs. Any one tile may be removed from a four-tile group.
Joker substitution : A player with a tile matching the color and value of a joker may replace the joker with that tile. If the joker is used in a set of three, if a player can split the set so only the joker remains, it may be used as any tile, so long as the player immediately uses it with at least 2 tiles from their rack. The joker must be played that same turn in a set with at least two other tiles from the player's rack. The color and the value of the joker may both change when this happens. Thus, if blue 3, blue 4, joker is an existing run, a player holding a blue 5, a red 7 and an orange 7 may replace the joker with his blue 5 and play the joker with the two sevens as a new group. As an alternative,the joker may be substituted for tiles already played. This will result in a faster paced game.
Harvested tiles : In the course of a turn, a tile that is "harvested" from an existing set must be played during the turn; it cannot be kept for later use. Example: if there is a 3,4,5 run on the table, the 3 can be harvested by putting down the appropriately-coloured 6, but the 3 must be used during that turn, not kept in the player's hand for later use.

At the end of each turn, all sets on the table must be valid, but during the course of a turn, utterly arbitrary temporary re-arrangements are allowed. These can get very involved, requiring several steps. Sometimes, what had been imagined in the mind to be possible turns out not to be, leaving the table in an illegal state. When this happens (and the choice of when to invoke this rule depends on how formal or "friendly" the game is), the offending player must return all sets on the table to their original state, and pick up three tiles as a penalty.

Should the game result in no winner, the player with the least number of tiles in their rack is the winner. Scoring is then carried out in the normal manner.