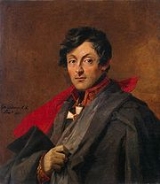 Encyclopedia
Alexander Ivanovich Count Osterman-Tolstoy (Russian
Russian language
Russian is a Slavic language used primarily in Russia, Belarus, Uzbekistan, Kazakhstan, Tajikistan and Kyrgyzstan. It is an unofficial but widely spoken language in Ukraine, Moldova, Latvia, Turkmenistan and Estonia and, to a lesser extent, the other countries that were once constituent republics...
: Александр Иванович Остерман-Толстой; 1772 – 12 February 1857) was a Russian
Russians
The Russian people are an East Slavic ethnic group native to Russia, speaking the Russian language and primarily living in Russia and neighboring countries....
nobleman and soldier in the era of the French Revolutionary Wars
French Revolutionary Wars
The French Revolutionary Wars were a series of major conflicts, from 1792 until 1802, fought between the French Revolutionary government and several European states...
. He belonged to the famous Tolstoy family. 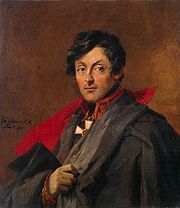 He participated in all major Russian battles of the Napoleonic Wars in 1805-1814. Upon his return from the campaign in northern Germany
Germany
Germany , officially the Federal Republic of Germany , is a federal parliamentary republic in Europe. The country consists of 16 states while the capital and largest city is Berlin. Germany covers an area of 357,021 km2 and has a largely temperate seasonal climate...
in 1805, he was named Governor of St. Petersburg. In 1811, he inherited the title of Count Osterman from his childless uncle, Ivan Osterman
Ivan Osterman
Count Ivan Andreyevich Osterman was a Russian statesman, son of Andrei Osterman.After Osterman's father had fallen into disgrace, he was transferred from the Imperial Guards to the regular army and then sent abroad, where he would continue his education. In 1757, Osterman was in the Russian...
, the last of the Osterman line. During 1812-1814 commanded a corps, and distinguished himself in the battle at Kulm 17–18 August 1813. He participated in the 1812 campaigns as a Commander of the 4th Army Corps, under the overall command of Johann von Klenau
Johann von Klenau
Johann von Klenau , also called Johann Josef Cajetan von Klenau und Janowitz, the son of a Bohemian noble, was a field marshal in the Habsburg army...
. Osterman-Tolstoy was wounded in the Battle of Bautzen
Battle of Bautzen
In the Battle of Bautzen a combined Russian/Prussian army was pushed back by Napoleon, but escaped destruction, some sources claim, because Michel Ney failed to block their retreat...
(May 21–22, 1813), before fighting at Dresden
Dresden
Dresden is the capital city of the Free State of Saxony in Germany. It is situated in a valley on the River Elbe, near the Czech border. The Dresden conurbation is part of the Saxon Triangle metropolitan area....
and at the Battle of Leipzig
Battle of Leipzig
The Battle of Leipzig or Battle of the Nations, on 16–19 October 1813, was fought by the coalition armies of Russia, Prussia, Austria and Sweden against the French army of Napoleon. Napoleon's army also contained Polish and Italian troops as well as Germans from the Confederation of the Rhine...
. His corps defended the gorges in the mountains of Bohemia and captured Marshal Vandamme. During the battle the count lost his left hand, as Emperor Alexander I put it, “by sacrificing his hand he bought us victory”.

In 1815, Osterman-Tolstoy briefly had a diplomatic assignment to Paris
Paris
Paris is the capital and largest city in France, situated on the river Seine, in northern France, at the heart of the Île-de-France region...
. In 1817, he was appointed General of the Infantry.

He never returned to Russia and shared his time between Italy and Switzerland.
He loved practical jokes and hoaxes. According to his contemporaries he was “a remarkable and original person, distinguished by his frankness and generosity. Even among his famous contemporaries he could be singled out. Fearlessness, courage, and endurance in battle were his characteristics as a military officer.”

Count Osterman-Tolstoy was married to Princess Elisabeth Alexeevna Galitzine
Galitzine
For Orthodox clergyman and theologian, see Alexander Golitzin.The Galitzines are one of the largest and noblest princely houses of Russia. Since the extinction of the Korecki family in the 17th century, the Golitsyns have claimed dynastic seniority in the House of Gediminas...
(1779–1853) from 1799; they had no children. He had foreign mistresses and a lot of illegitimate children. There is an engraving, published in Pisa in 1827, on which Count Osterman-Tolstoy is depicted sitting beside a pram with a sleeping baby and two older children playing nearby; the inscription says, ‘Je me flatte que c’est les derniers faries (sic). A 55 ans il est temps de faire la clôture.’ (I flatter myself with the thought that it’s my last extravagancy. At the age of 55 one must stop).

Osterman-Tolstoy finally settled in Le Petit-Saconnex on Lake Geneva
Lake Geneva
Lake Geneva or Lake Léman is a lake in Switzerland and France. It is one of the largest lakes in Western Europe. 59.53 % of it comes under the jurisdiction of Switzerland , and 40.47 % under France...
(Switzerland
Switzerland
Switzerland name of one of the Swiss cantons. ; ; ; or ), in its full name the Swiss Confederation , is a federal republic consisting of 26 cantons, with Bern as the seat of the federal authorities. The country is situated in Western Europe,Or Central Europe depending on the definition....
) in 1837, where he died in 1857.