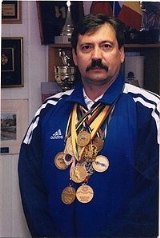 Encyclopedia
Aleksandr Sidorenko is a former individual medley swimmer
Swimming (sport)
Swimming is a sport governed by the Fédération Internationale de Natation .-History: Competitive swimming in Europe began around 1800 BCE, mostly in the form of the freestyle. In 1873 Steve Bowyer introduced the trudgen to Western swimming competitions, after copying the front crawl used by Native...
from the USSR. He won the 400 m individual medley at the 1980 Summer Olympics
1980 Summer Olympics
The 1980 Summer Olympics, officially known as the Games of the XXII Olympiad, was an international multi-sport event celebrated in Moscow in the Soviet Union. In addition, the yachting events were held in Tallinn, and some of the preliminary matches and the quarter-finals of the football tournament...
in Moscow
Moscow
Moscow is the capital, the most populous city, and the most populous federal subject of Russia. The city is a major political, economic, cultural, scientific, religious, financial, educational, and transportation centre of Russia and the continent...
.

He now works as the manager of the water polo team "Ilyichevets."