Encyclopedia
Aldabra, the world's second largest coral
Coral
Corals are marine animals in class Anthozoa of phylum Cnidaria typically living in compact colonies of many identical individual "polyps". The group includes the important reef builders that inhabit tropical oceans and secrete calcium carbonate to form a hard skeleton.A coral "head" is a colony of...
atoll
Atoll
An atoll is a coral island that encircles a lagoon partially or completely.- Usage :The word atoll comes from the Dhivehi word atholhu OED...
, is in the Aldabra Group
Aldabra Group
The Aldabra Group are part of the Outer Islands of the Seychelles, lying in the southwest of the island nation, 1000 kilometres from the capital, Victoria, on Mahé Island.The total land area of the Aldabra Group is 175.91 km²....
of islands in the Indian Ocean
Indian Ocean
The Indian Ocean is the third largest of the world's oceanic divisions, covering approximately 20% of the water on the Earth's surface. It is bounded on the north by the Indian Subcontinent and Arabian Peninsula ; on the west by eastern Africa; on the east by Indochina, the Sunda Islands, and...
that form part of the Seychelles
Seychelles
Seychelles , officially the Republic of Seychelles , is an island country spanning an archipelago of 115 islands in the Indian Ocean, some east of mainland Africa, northeast of the island of Madagascar....
. Uninhabited and extremely isolated, Aldabra is virtually untouched by humans, has distinctive island fauna including the Aldabra Giant Tortoise
Aldabra Giant Tortoise
The Aldabra giant tortoise , from the islands of the Aldabra Atoll in the Seychelles, is one of the largest tortoises in the world....
, and is designated a World Heritage Site
World Heritage Site
A UNESCO World Heritage Site is a place that is listed by the UNESCO as of special cultural or physical significance...
. 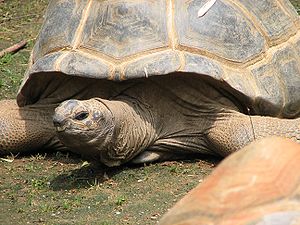 Aldabra was visited by Portuguese navigators in 1511. The islands were already known to the Arabs, from whom they get their name. In the middle of the 18th century, they became dependencies of the French colony of Réunion
Réunion
Réunion is a French island with a population of about 800,000 located in the Indian Ocean, east of Madagascar, about south west of Mauritius, the nearest island.Administratively, Réunion is one of the overseas departments of France...
, from where expeditions were made for the capture of the giant tortoise
Giant tortoise
Giant tortoises are characteristic reptiles of certain tropical islands. Often reaching enormous size—they can weigh as much as 300 kg and can grow to be 1.3 m long—they live, or lived , in the Seychelles, the Mascarenes and the Galapagos...
s.

In 1810 with Mauritius
Mauritius
Mauritius , officially the Republic of Mauritius is an island nation off the southeast coast of the African continent in the southwest Indian Ocean, about east of Madagascar...
, Réunion, the Seychelles and other islands, Aldabra passed into the possession of Great Britain
Great Britain
Great Britain or Britain is an island situated to the northwest of Continental Europe. It is the ninth largest island in the world, and the largest European island, as well as the largest of the British Isles...
. Réunion was returned to France, and Mauritius gained possession of Aldabra as well as the rest of the Seychelles. The previous inhabitants were emigrants from the Seychelles. Sailors landed on the atoll in the 19th century and attempted to raid the island for tortoises as food; in 1842, two ships were reported to have taken 1200 of them. By 1900, the tortoises were nearly extinct, and a crew would often have to hunt for three days to find one.

The Aldabra Atoll, along with Des Roches and Farquhar
Farquhar Group
The Farquhar Group belong to the Outer Islands of the Seychelles, lying in the southwest of the island nation, more than 700 kilometres southwest the capital, Victoria, on Mahé Island. The total land area of all islands in the group is less than 11 km², but the total area of the atolls measures...
, was part of the British Indian Ocean Territory
British Indian Ocean Territory
The British Indian Ocean Territory or Chagos Islands is an overseas territory of the United Kingdom situated in the Indian Ocean, halfway between Africa and Indonesia...
from 1965 until Seychelles independence in 1976. In the 1960s, the British considered allowing the United States to use the island as home for a military air base. After an international protest by ecologists, however, the military plans were abandoned and the wildlife habitat instead received full protection. Aldabra was designated a World Heritage Site
World Heritage Site
A UNESCO World Heritage Site is a place that is listed by the UNESCO as of special cultural or physical significance...
on November 19, 1982, and is administered from Mahé by the Seychelles Island Foundation.

The abandoned settlement Picard on the southwestern tip of West Island is now home to the Research Officer, the Island Manager and their rangers and staff. There is no other permanent population.

Aldabra is a raised coral atoll
Raised coral atoll
A raised coral atoll is a typical atoll which has been lifted high enough above sea level by tectonic forces to protect it from scouring by storms and enable soils and diverse – often endemic – species of flora and fauna to develop...
more than 700 miles (1,126.5 km) from Mahé
Mahé, Seychelles
Mahé is the largest island of the Seychelles, lying in the north east of the nation. The population of Mahé is 80,000. It contains the capital city of Victoria and accommodates 90% of the country's total population...
, the principal island of the Seychelles and is closer to the coast of Africa and is 265 miles (426.5 km) northwest of Madagascar
Madagascar
The Republic of Madagascar is an island country located in the Indian Ocean off the southeastern coast of Africa...
and a similar distance northeast from the Comoro Islands
Comoro Islands
The Comoros Islands form an archipelago of volcanic islands situated off the south-east coast of Africa, to the east of Mozambique and north-west of Madagascar. They are divided between the sovereign state of Comoros and the French overseas department of Mayotte...
.
The atoll is located at 9°24′S 46°22′E and belongs to the Aldabra Group
Aldabra Group
The Aldabra Group are part of the Outer Islands of the Seychelles, lying in the southwest of the island nation, 1000 kilometres from the capital, Victoria, on Mahé Island.The total land area of the Aldabra Group is 175.91 km²....
, one of the island groups of the Outer Islands of the Seychelles
Outer Islands (Seychelles)
The Outer Islands or Coralline Seychelles is a collective term for those islands of the Seychelles that are not on the shallow Seychelles Bank which defines the location of the Inner Islands. They are located at distances of 230 to 1150 km from the main Seychelles island of Mahé, and are all...
, which includes the island of Assumption and the atolls of Astove and Cosmoledo.

The atoll is the second largest in the world by land area, after Kiritimati
Kiritimati
Kiritimati or Christmas Island is a Pacific Ocean raised coral atoll in the northern Line Islands, and part of the Republic of Kiribati....
. It is 34 km long, 14.5 km wide, and up to 8 meters above sea level, and has a land area of 155.4 km². The lagoon
Lagoon
A lagoon is a body of shallow sea water or brackish water separated from the sea by some form of barrier. The EU's habitat directive defines lagoons as "expanses of shallow coastal salt water, of varying salinity or water volume, wholly or partially separated from the sea by sand banks or shingle,...
measures 224 km² in area, of which roughly two thirds fall dry during low tide. The atoll consists of a ring of four larger islands: counterclockwise, they are South Island (Grand Terre, 116.1 km²), Malabar or Middle Island (26.8 km²), Polymnieli or Polymnie Island (4.75 km²) and Picard or West Island (9.4 km²). 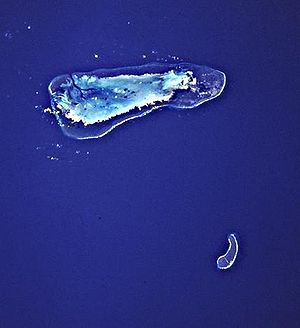 Additionally, there are some forty smaller islands and rocks, all inside the lagoon
Lagoon
A lagoon is a body of shallow sea water or brackish water separated from the sea by some form of barrier. The EU's habitat directive defines lagoons as "expanses of shallow coastal salt water, of varying salinity or water volume, wholly or partially separated from the sea by sand banks or shingle,...
, except a few very small islets at the West Channels between South and Polymnie Islands, the largest of those being Îlot Magnan. The largest islands inside the lagoon are Île Michel (Michael Island), in the east (0.34 km² or 0.16 sq mi) and Île Esprit (Spirit Island), in the west (0.41 km² 0.13 sq mi).

The islands consist of limestone uplands, sand dunes and beaches based on the remains of a coral reef.

Aldabra has a number of endemic plant species. The higher areas are covered in species of pemphis
Pemphis
Pemphis is a possibly unispecific genus of maritime plants in family Lythraceae, represented by the type species, described in 1775, Pemphis acidula .Pemphis are highly adaptive...
, thick coastal shrubs, while the lower areas which are home to the giant tortoises, are a mixture of trees, shrubs, herbs and grasses.

The atoll is home to the world's largest population of giant tortoise
Giant tortoise
Giant tortoises are characteristic reptiles of certain tropical islands. Often reaching enormous size—they can weigh as much as 300 kg and can grow to be 1.3 m long—they live, or lived , in the Seychelles, the Mascarenes and the Galapagos...
s, the Aldabra Giant Tortoise (Dipsochelys dussumieri), numbering some 100,000 individuals. They are also known for their Coconut crab
Coconut crab
The coconut crab, Birgus latro, is a species of terrestrial hermit crab, also known as the robber crab or palm thief. It is the largest land-living arthropod in the world, and is probably at the upper size limit of terrestrial animals with exoskeletons in today's atmosphere at a weight of up to...
(Birgus latro), the world's largest land crab, and hammerhead shark
Hammerhead shark
The hammerhead sharks are a group of sharks in the family Sphyrnidae, so named for the unusual and distinctive structure of their heads, which are flattened and laterally extended into a "hammer" shape called a "cephalofoil". Most hammerhead species are placed in the genus Sphyrna while the...
s, manta ray
Manta ray
The manta ray is the largest species of the rays. The largest known specimen was more than across, with a weight of about . It ranges throughout waters of the world, typically around coral reefs...
s, barracuda
Barracuda
The barracuda is a ray-finned fish known for its large size and fearsome appearance. Its body is long, fairly compressed, and covered with small, smooth scales. Some species could reach up to 1.8m in length and 30 cm in width...
and as a breeding ground for green turtles and hawksbill turtle
Hawksbill turtle
The hawksbill sea turtle is a critically endangered sea turtle belonging to the family Cheloniidae. It is the only extant species in its genus. The species has a worldwide distribution, with Atlantic and Pacific subspecies. E. imbricata imbricata is the Atlantic subspecies, while E...
s; in older times, its dominant land predator was the crocodillian Aldabrachampsus
Aldabrachampsus
Aldabrachampsus is an extinct genus of crocodylian. A horned crocodile, its incomplete remains were found on Aldabra Atoll in the western Indian Ocean. It was small and lived during the Pleistocene....
. Birds of Aldabra include the Aldabra rail
Dryolimnas
The genus Dryolimnas comprises birds in the rail family. The Réunion Rail, a member of this genus, became extinct in the 17th century. The White-throated Rail of Aldabra is the last surviving flightless bird in the western Indian Ocean....
, the last surviving flightless bird of the Indian Ocean region, and the endangered Malagasy Sacred Ibis as well as large numbers of nesting seabirds. Two species of bats, Paratriaenops pauliani and Pteropus aldabrensis, are known only from Aldabra.