The Albrechtsburg is a Late Gothic
Gothic architecture
Gothic architecture is a style of architecture that flourished during the high and late medieval period. It evolved from Romanesque architecture and was succeeded by Renaissance architecture....
castle that dominates the town centre of Meissen
Meissen
Meissen is a town of approximately 30,000 about northwest of Dresden on both banks of the Elbe river in the Free State of Saxony, in eastern Germany. Meissen is the home of Meissen porcelain, the Albrechtsburg castle, the Gothic Meissen Cathedral and the Meissen Frauenkirche...
in the German
Germany
Germany , officially the Federal Republic of Germany , is a federal parliamentary republic in Europe. The country consists of 16 states while the capital and largest city is Berlin. Germany covers an area of 357,021 km2 and has a largely temperate seasonal climate...
state of Saxony
Saxony
The Free State of Saxony is a landlocked state of Germany, contingent with Brandenburg, Saxony Anhalt, Thuringia, Bavaria, the Czech Republic and Poland. It is the tenth-largest German state in area, with of Germany's sixteen states....
.

By 929 King Henry I of Germany had finally subdued the Slavic Glomacze
Glomacze
The Glomacze, also Golomacze or Dolomici - were Polabian Slavs inhabiting areas in the middle Elbe valley. Other West Slavic tribes such as the Milceni settled east of them. About 850 the Bavarian Geographer located their settlement area east of the Sorbs...
tribe and built a fortress within their settlement area, situated on a rock high above the Elbe
Elbe
The Elbe is one of the major rivers of Central Europe. It rises in the Krkonoše Mountains of the northwestern Czech Republic before traversing much of Bohemia , then Germany and flowing into the North Sea at Cuxhaven, 110 km northwest of Hamburg...
river. This castle, called Misnia after a nearby creek, became the nucleus of the town and from 965 the residence of the Margraves of Meissen, who in 1423 acquired the Electorate of Saxony
Electorate of Saxony
The Electorate of Saxony , sometimes referred to as Upper Saxony, was a State of the Holy Roman Empire. It was established when Emperor Charles IV raised the Ascanian duchy of Saxe-Wittenberg to the status of an Electorate by the Golden Bull of 1356...
.

From 1464 Elector Ernest of Saxony
Ernest, Elector of Saxony
Ernst, Elector of Saxony was Elector of Saxony from 1464 to 1486.-Biography:Ernst was founder of the Ernestine line of Saxon princes, ancestor of George I of Great Britain, Prince Albert of Saxe-Coburg and Gotha, as well as his wife and cousin Queen Victoria of the United Kingdom, and their...
ruled jointly with his younger brother Albert the Bold
Albert, Duke of Saxony
Albert III was a Duke of Saxony. He was nicknamed Albert the Bold or Albert the Courageous and founded the Albertine line of the House of Wettin....
and both had the present-day castle erected from 1471 on. The masterpiece of court builder Arnold of Westphalia, it was constructed solely as a residence, not as a military fortress, the first German castle built for such a purpose. When the brothers divided the Wettin lands by the 1485 Treaty of Leipzig
Treaty of Leipzig
The Treaty of Leipzig was signed on August 26, 1485 between Elector Ernest of Saxony and his younger brother Albert III, sons of Elector Frederick II of Saxony from the House of Wettin....
, the castle of Meissen fell to Albert. Though Albert's son Duke George the Bearded
George, Duke of Saxony
George the Bearded, Duke of Saxony , was duke of Saxony from 1500 to 1539.Duke George was a member of the Order of the Golden Fleece.-Early life:...
resided at the Albrechtsburg, it was soon superseded by Dresden Castle
Dresden castle
Dresden Castle is one of the oldest buildings in Dresden. For almost 400 years, it has been the residence of the electors and kings of Saxony...
as the new seat of the Wettin Albertinian line. 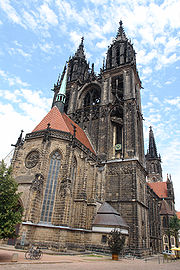 The adjacent Gothic cathedral was the episcopal see of the Bishopric of Meissen
Roman Catholic Diocese of Dresden-Meissen
The Diocese of Dresden-Meissen is a Diocese of Catholic Church in Germany. Founded as the Bishopric of Meissen in 968, it was dissolved in 1539 during the Protestant Reformation. The diocese was reestablished in 1921 and renamed Dresden-Meissen in 1980. The seat of the diocese is in Dresden and...
established by Emperor Otto I
Otto I, Holy Roman Emperor
Otto I the Great , son of Henry I the Fowler and Matilda of Ringelheim, was Duke of Saxony, King of Germany, King of Italy, and "the first of the Germans to be called the emperor of Italy" according to Arnulf of Milan...
in 968. The present-day hall church
Hall church
A hall church is a church with nave and side aisles of approximately equal height, often united under a single immense roof. The term was first coined in the mid-19th century by the pioneering German art historian Wilhelm Lübke....
was built between 1260 and 1410, the interior features Gothic sculptures of founder Emperor Otto and his wife Adelaide of Italy
Adelaide of Italy
Saint Adelaide of Italy , also called Adelaide of Burgundy, was the second wife of Otto the Great, Holy Roman Emperor...
as well as paintings from the studio of Lucas Cranach the Elder
Lucas Cranach the Elder
Lucas Cranach the Elder , was a German Renaissance painter and printmaker in woodcut and engraving...
. The first Saxon elector
Prince-elector
The Prince-electors of the Holy Roman Empire were the members of the electoral college of the Holy Roman Empire, having the function of electing the Roman king or, from the middle of the 16th century onwards, directly the Holy Roman Emperor.The heir-apparent to a prince-elector was known as an...
from the House of Wettin, Margrave Frederick I
Frederick I, Elector of Saxony
Frederick IV of Meissen and Elector of Saxony was Margrave of Meissen and Elector of Saxony from 1381 until his death. He is not to be confused with his cousin Frederick IV, Landgrave of Thuringia, the son of Balthasar, Landgrave of Thuringia...
had the Prince's Chapel erected in 1425 as the burial place of his dynasty.