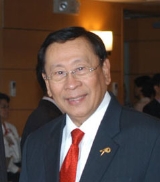 Rómulo was born in Camiling, Tarlac
Camiling, Tarlac
----Camiling is a 1st class urban municipality of the province of Tarlac in the Philippines. According to the latest census, it has a population of 79,941 people in 15,324 households. The density is 1035.75 people per km2.Camiling is an urban municipality and one of the fastest-growing towns of...
from Pangasinan parents. He was then elected as member of the Regular Batasang Pambansa
Regular Batasang Pambansa
The Regular Batasang Pambansa or the Second Batasan was the meeting of the parliament of the Philippines from the beginning of its session on July 23, 1984 until it was abolished by President Corazon Aquino on March 25, 1986....
representing Quezon City
Quezon City
Quezon City is the former capital and the most populous city in the Philippines. Located on the island of Luzon, Quezon City is one of the cities and municipalities that make up Metro Manila, the National Capital Region. The city was named after Manuel L...
in 1984. He then joined government service as the Minister of the Budget of President Corazon Aquino. He was a senator from 1987 to 1998, during which time he served as Majority Leader for five years.

He became Finance Secretary in January 2001, having been appointed when President Gloria Macapagal-Arroyo
Gloria Macapagal-Arroyo
Gloria Macapagal-Arroyo is a Filipino politician who served as the 14th President of the Philippines from 2001 to 2010, as the 12th Vice President of the Philippines from 1998 to 2001, and is currently a member of the House of Representatives representing the 2nd District of Pampanga...
took office and formed her own cabinet. He left this position in May 2001; Romulo was later appointed as an Executive Secretary. On August 18, 2004, he was appointed Foreign Secretary, and which he would hold until February 25, 2011. He served as Chairman of the Association of Southeast Asian Nations
Association of Southeast Asian Nations
The Association of Southeast Asian Nations, commonly abbreviated ASEAN rarely ), is a geo-political and economic organization of ten countries located in Southeast Asia, which was formed on 8 August 1967 by Indonesia, Malaysia, the Philippines, Singapore and Thailand. Since then, membership has...
or ASEAN in 2007.
The source of this article is wikipedia, the free encyclopedia.  The text of this article is licensed under the GFDL.