Overview
----
Camiling is a 1st class urban municipality of the province of Tarlac in the Philippines
Philippines
The Philippines , officially known as the Republic of the Philippines , is a country in Southeast Asia in the western Pacific Ocean. To its north across the Luzon Strait lies Taiwan. West across the South China Sea sits Vietnam...
. According to the latest census, it has a population of 79,941 people in 15,324 households. The density is 1035.75 people per km2.Camiling is an urban municipality and one of the fastest-growing towns of Tarlac when it comes to income and economy. It is one of the progressive town of the province.

Camiling is the major north-western municipality in Tarlac.

Looking for a lawyer
More

Encyclopedia
----
Camiling is a 1st class urban municipality of the province of Tarlac in the Philippines
Philippines
The Philippines , officially known as the Republic of the Philippines , is a country in Southeast Asia in the western Pacific Ocean. To its north across the Luzon Strait lies Taiwan. West across the South China Sea sits Vietnam...
. According to the latest census, it has a population of 79,941 people in 15,324 households. The density is 1035.75 people per km2.Camiling is an urban municipality and one of the fastest-growing towns of Tarlac when it comes to income and economy. It is one of the progressive town of the province.

Camiling is the major north-western municipality in Tarlac. It is also about 150 kilometers north-northwest of Manila
Manila
Manila is the capital of the Philippines. It is one of the sixteen cities forming Metro Manila.Manila is located on the eastern shores of Manila Bay and is bordered by Navotas and Caloocan to the north, Quezon City to the northeast, San Juan and Mandaluyong to the east, Makati on the southeast,...
, and about 50 kilometers south-southwest of Dagupan City
Dagupan City
The City of Dagupan is a 1st class city in the Philippines. It is an independent component city of the province of Pangasinan. According to the latest census, Dagupan City has a population of 149,554 people in 25,921 households. Located on Lingayen Gulf on the island of Luzon, Dagupan is the...
in Pangasinan
Pangasinan
Pangasinan is a province of the Republic of the Philippines. The provincial capital is Lingayen. Pangasinan is located on the west central and peripheral area of the island of Luzon along the Lingayen Gulf, with the total land area being 5,368.82 square kilometers . According to the latest census,...
. It is the commercial center of an area composed of about 8 towns, and borders the province of Pangasinan. It is the gateway to central and western Pangasinan through the Romulo Highway (formerly Highway 13). It borders San Clemente on the west, Bayambang from the north, Sta. Ignacia and Mayantoc to the south and Paniqui and Moncada by the east. It is also known for its famous "Chicharon" and its green native rice cake called "Iniruban".

The community was originally a vast area of Cogon growth interposed with thick forestalls areas stretching into the Zambales
Zambales
Zambales is a province of the Philippines located in the Central Luzon region. Its capital is Iba. Zambales borders Pangasinan to the north, Tarlac and Pampanga to the east, and Bataan to the south. The province lies between the South China Sea and the Zambales Mountains. With a land area of...
mountain ranges. A wide river cut through it. The early inhabitants of the place were the Aeta
Aeta
The Aeta , Agta or Ayta are an indigenous people who live in scattered, isolated mountainous parts of Luzon, Philippines. They are considered to be Negritos, who are dark to very dark brown-skinned and tend to have features such as a small stature, small frame, curly to kinky afro-like textured...
s who make a living by gathering fruit from fruit trees, hunting, and fishing. With the coming of the Pangasinenses and Ilocanos from the north, the Aetas who used to roam freely in the wilderness obliged themselves to move in to the interior. The new settlers first occupied the swampy land, now known as "Cacamilingan" on the opposite side of the river. With the passage of time, these settlers moved to the opposite shore in view of the fact that most often disastrous floods are visiting the present site. To this new location, the residents therein built a little church with the villagers taking Saint Michael as the Patron Saint.

As this settlement progressed, Camiling became a District Commission from 1834 to 1837. It was founded by Don Francisco Soriano, a barangay leader who became the town's first District Commissioner. In 1838, Camiling became an independent town, formally separated from the mother town of Paniqui and with Don Vicente Galsim, the first Governadorcillo. Thirty-eight others followed him. Don Buenaventura Torres, the last to serve under the Spanish regime and the first Presidente Municipal under the Revolutionary Government by Aguinaldo.

Camiling is known for its architectural antiquity seen from the old San Miguel Church but was burned in 1997. 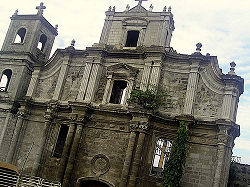 A historical building built around 18th century, the Catholic Church of Camiling was destroyed and rebuilt in the 1880s after a surge of major earthquake. The centuries-old Roman Catholic Church and Convent have been declared historical sites by the National Historical Commission in 1994. The Church was the death place of General Pedro Pedroche and his men in the hands of Francisco Makabulos. The current church had been transferred to the then Camiling Catholic School's Gymnasium before the construction of a new Camiling church were constructed beside the old ruins. The old church was planned to be transformed into a museum. This is the oldest church ever built in the province of Tarlac. But the worst thing is many citizens of Camiling believes that the Cojuancos'were responsible for the big destruction in the heritage church of the municipality. They wanted to gather all of the golds, diamonds,rubies and other treasures that buried inside the place to become more superior to other people when it comes to richness and power.

Had been built after the Philippine revolution by the revolutionaries attempt to "Filipinize" the Church. This is the second church built by Gregorio Aglipay, the first one being in Paniqui. 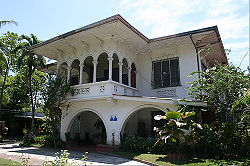 A part of a house where Leonor Rivera dwells. Several priceless artifacts belonging to her, immortalized by Noli Me Tangere as Maria Clara and even her late admirer, the national hero Jose Rizal
José Rizal
José Protacio Rizal Mercado y Alonso Realonda , was a Filipino polymath, patriot and the most prominent advocate for reform in the Philippines during the Spanish colonial era. He is regarded as the foremost Filipino patriot and is listed as one of the national heroes of the Philippines by...
had been exhibited on glass.

Maria Clara Town Plaza
A wide plaza complex that features various sports fields, a park, a playground, an auditorium and a wide grassy field. It currently hosts one of the two temporary Camiling Public Markets as it is under construction for the moment. Maria Clara Town Plaza is the second widest park plaza in the province which composed of four hectares of lands suitable for some activities celebrated by the municipality and some schools of Camiling.

Camiling boost a world class hotel called Camiling Royal Hotel and other high facilities inn like the Havanna Hotel and Camiling Royal Suites. It has also Camiling Hotel. All over the province it has the largest and the widest branch of Jolibee and Cindy's Bakery and Restaurant.

Camiling's one town one product the famous crispy delicious Chicharon or Bagnet by the Ilocanos of Ilocos Sur and the sweet green native cakes called Iniruban or Dirimin use terms in Pangasinan.in the universal history of Tarlac Camiling is the 1st class municipality of the provinc to produce a one town one product.it even beat the capital which is Tarlac city and the other 1st class municipalities like Concepcion, Paniqui, Capas or even Victoria, Anao and all of the smaller towns of the province. So they open up this celebration. More than those products the municipality of Camiling is also known for other native cakes such as Tupig and Patupat which the Ilocanos have been preserved for centuries up to present.

Camiling currently hosts Iniruban and Chicharon Festival. Held every last week of October (October 26) , it is coupled with colorful and artistic presentations and street dances by different schools in Camiling. It is the only 1st class town of Tarlac with such a unique product. As we know Camiling, Tarlac is the Chicharon and Iniruban capital of the Philippines not only in the country but even the whole world The festival was born on 2000 in this town which it is said to be the oldest festival in Tarlac in terms of the "One Town, One Product" policy. The street dancing competition are held annually to showcase Camiling's products and cultural heritage. Camiling also want to prove that their One town One product of Camiling is the famous and the most describe product of the province which open the Camilineos to superiority. The municipality also want to prove that with the street dancing competition of the festival which show as the most highlights of the celebration that that is the pride of every Camileneos which they can not be beaten by the other towns of Tarlac not only the 1st class and other small classes but even the capital of Tarlac.noted that you can't see any Iniruban or Dirimin in the Philippines or even in the world but hare in Camiling and Pangasinan. But majority of the tourist said that Iniruban of Camiling is better than that of Pangasinan.

Pangasinense is spoken specially on the eastern banks of Camiling river and the northern parts of the town. Camilenos of Pangasinense origin are prevalent in the northern and western part but also some adopted Ilocano as their second language.

Filipino (Tagalog) is widely understood and spoken. There are also traces of Pampango, Visayan and Moro settlers especially on BARYO DAPO area.


Municipal Officials Of The Local Government Unit Of Camiling, Tarlac

Camiling is politically subdivided into 61 barangay
Barangay
A barangay is the smallest administrative division in the Philippines and is the native Filipino term for a village, district or ward...
s. Camiling has the most barangays in all of the municipalities of Tarlac. It is next to the city of Tarlac with a number of 76 barangays.