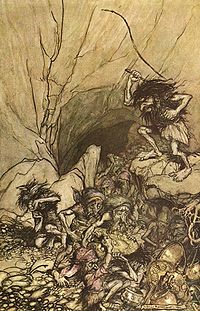 Alberich was a legendary sorcerer who originated in the mythology or epic sagas of the Frankish
Franks
The Franks were a confederation of Germanic tribes first attested in the third century AD as living north and east of the Lower Rhine River. From the third to fifth centuries some Franks raided Roman territory while other Franks joined the Roman troops in Gaul. Only the Salian Franks formed a...
Merovingian Dynasty of the 5th to 8th century AD, and whose name means king of the elves (elbe "elves", reix, rex "king"), who possessed the ability to become invisible
Invisibility in fiction
Invisibility in fiction is a common plot device, found in both the science fiction and fantasy genres. In fantasy, invisibility is often invoked and dismissed at will, with a magic spell, a potion or a ring...
. He was also known as king of the dwarves.

In Wagner
Richard Wagner
Wilhelm Richard Wagner was a German composer, conductor, theatre director, philosopher, music theorist, poet, essayist and writer primarily known for his operas...
's opera cycle Der Ring des Nibelungen
Der Ring des Nibelungen
Der Ring des Nibelungen is a cycle of four epic operas by the German composer Richard Wagner . The works are based loosely on characters from the Norse sagas and the Nibelungenlied...
, Alberich is chief of the Nibelung
Nibelung
The German Nibelungen and the corresponding Old Norse form Niflung is the name in Germanic and Norse mythology of the royal family or lineage of the Burgundians who settled at Worms....
en race of dwarfs and the main antagonist driving events. Wagner's Alberich is a composite character
Composite character
A composite character is a character composed of two or more individuals, appearing in a fictional or non-fictional work. Two fictional characters are often combined into one upon adaptation of a work from one medium to another, as in the film adaptation of a novel...
, mostly based on Alberich from the Nibelungenlied, but also on Andvari
Andvari
In Norse mythology, Andvari is a dwarf who lives underneath a waterfall and has the power to change himself into a fish at will. Andvari had a magical ring Andvarinaut, which helped him become wealthy....
from Norse mythology
Norse mythology
Norse mythology, a subset of Germanic mythology, is the overall term for the myths, legends and beliefs about supernatural beings of Norse pagans. It flourished prior to the Christianization of Scandinavia, during the Early Middle Ages, and passed into Nordic folklore, with some aspects surviving...
. He has been widely described, most notably by Theodor Adorno, as a negative
Anti-Semitism
Antisemitism is suspicion of, hatred toward, or discrimination against Jews for reasons connected to their Jewish heritage. According to a 2005 U.S...
Jewish stereotype, with his race expressed through "distorted" music and "muttering" speech.; other critics, however, disagree with this assessment.

Some scholars propose the following characters evolved in later centuries from the concept of Alberich as king of the elves and dwarves:
The source of this article is wikipedia, the free encyclopedia.  The text of this article is licensed under the GFDL.