Encyclopedia
The Alaska State Fair is an annual state fair
State fair
A state fair is a competitive and recreational gathering of a U.S. state's population. It is a larger version of a county fair, often including only exhibits or competitors that have won in their categories at the more-local county fairs....
held in Palmer
Palmer, Alaska
Palmer is the borough seat of the Matanuska-Susitna Borough in the state of Alaska, USA. It is part of the Anchorage Metropolitan Statistical Area. As of the 2010 census, the population of the city is 5,937....
, Alaska. USA
The 2011 Alaska State Fair, which marked the event’s 75th birthday, was held August 25 to September 5 with the theme “75 Years and Growin’.”

The first Alaska State Fair was held September 4th–7th, 1936. It was organized by the families who moved to Alaska’s Matanuska-Susitna Valley
Matanuska-Susitna Valley
Matanuska-Susitna Valley is an area in Southcentral Alaska south of the Alaska Range about 35 miles north of Anchorage, Alaska....
in 1935, when the U.S. government established a farming colony there with the intent of opening up Alaska
Alaska
Alaska is the largest state in the United States by area. It is situated in the northwest extremity of the North American continent, with Canada to the east, the Arctic Ocean to the north, and the Pacific Ocean to the west and south, with Russia further west across the Bering Strait...
, providing food to the military in case of war, and giving families on relief a new start.

That first year’s Fair included the crowning of the Fair queen, a baby show, boxing matches, horse races, dances, a rodeo
Rodeo
Rodeo is a competitive sport which arose out of the working practices of cattle herding in Spain, Mexico, and later the United States, Canada, South America and Australia. It was based on the skills required of the working vaqueros and later, cowboys, in what today is the western United States,...
and baseball games. There were also agricultural entries, including giant cabbages, grain, carrots, onions, celery, peas and other vegetables.

During World War II, the Fair took a five-year hiatus from 1942 to 1946. But the Fair was back in operation in 1947. 1950 saw the first carnival rides at the Fair. In 1956, the Fair Board petitioned the Alaska Legislature for official designation as the Alaska State Fair. In 1960, the Fair celebrated its 25th anniversary and was paid a visit by President John F. Kennedy
John F. Kennedy
John Fitzgerald "Jack" Kennedy , often referred to by his initials JFK, was the 35th President of the United States, serving from 1961 until his assassination in 1963....
.

1967 was the Fair’s first year in its present 300-acre location at 2075 Glenn Highway in Palmer
Palmer, Alaska
Palmer is the borough seat of the Matanuska-Susitna Borough in the state of Alaska, USA. It is part of the Anchorage Metropolitan Statistical Area. As of the 2010 census, the population of the city is 5,937....
. The total attendance that year reached 72,000. Over the years, Fair attendance has continued its upward trend. During the 18-day Fair in 1998, a record 361,804 people participated in the event. That same year, the Fair accepted 10,890 exhibit entries – the highest on record. The Fair set another record in 2003, with 312,419 visitors attending the Fair over a 12-day period.

Fairground facilities have also continued to grow. In 1975, the Fair became home to Colony Village, which preserves some of the historic buildings from the Valley’s early days. In 1997, the construction of Pioneer Plaza and Raven Hall was completed. In 2004, the Fair opened its new Green Gate and Railroad Depot.

Also in 2010, Valley resident and protester Sidney Hill was arrested for fourth-degree assault, disorderly conduct and trespassing after he caused a disturbance on the fairgrounds while carrying a large political sign. The incident was addressed on the Fair blog, and subsequent articles regarding Mr. Hill’s activities were published in the Anchorage Daily News
Anchorage Daily News
The Anchorage Daily News is a daily newspaper based in Anchorage, Alaska, in the United States. It is often referred to colloquially as either "the Daily News" or "the ADN"...
and The Frontiersman. 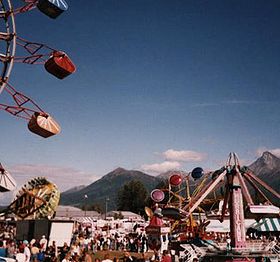 The Fair’s giant cabbage contest tradition began in 1941, when a $25 prize was offered for the largest cabbage and Max Sherrod of the Valley took the prize with a 23 pounder. The official Giant Cabbage Weigh-Off was established in 1995. In 2009, grower Steve Hubacek entered a 127.0-pound cabbage, which not only took first place, but also set a new world record.

In 2007, the Fair’s flowers and gardens received some national recognition, when the makers of the Public Broadcasting Service program GardenSMART visited the Fair to film a 30-minute segment.

Topping the list of fairgoer favorites is Fair food. Nearly 70 food vendors are scheduled to attend the 2011 Fair, offering staples like hot dogs, pizza, burgers and nachos, to more exotic selections including gyros, Alaska seafood and all kinds of food on a stick, to desserts like ice cream, cream puffs and more. More than 400 non-food vendors are also present at the Fair each year.

The Fair also features thousands of exhibits, in categories including art, baked goods, canning
Canning
Canning is a method of preserving food in which the food contents are processed and sealed in an airtight container. Canning provides a typical shelf life ranging from one to five years, although under specific circumstances a freeze-dried canned product, such as canned, dried lentils, can last as...
, clay arts, crops, fiber and fleece, flowers, handwork and needlework
Needlework
Needlework is a broad term for the handicrafts of decorative sewing and textile arts. Anything that uses a needle for construction can be called needlework...
, homebrew, honey
Honey
Honey is a sweet food made by bees using nectar from flowers. The variety produced by honey bees is the one most commonly referred to and is the type of honey collected by beekeepers and consumed by humans...
and bee products, livestock, photography
Photography
Photography is the art, science and practice of creating durable images by recording light or other electromagnetic radiation, either electronically by means of an image sensor or chemically by means of a light-sensitive material such as photographic film...
, poultry
Poultry
Poultry are domesticated birds kept by humans for the purpose of producing eggs, meat, and/or feathers. These most typically are members of the superorder Galloanserae , especially the order Galliformes and the family Anatidae , commonly known as "waterfowl"...
, quilts, rabbits, sewing
Sewing
Sewing is the craft of fastening or attaching objects using stitches made with a needle and thread. Sewing is one of the oldest of the textile arts, arising in the Paleolithic era...
, spirited beverages and soda pop, and woodworking
Woodworking
Woodworking is the process of building, making or carving something using wood.-History:Along with stone, mud, and animal parts, wood was one of the first materials worked by early humans. Microwear analysis of the Mousterian stone tools used by the Neanderthals show that many were used to work wood...
.

The Fair also features free entertainment around the grounds, and events and contests like the rodeo, Diaper Derby, and Alaska Grown Games. The Fair also hosts a midway with carnival rides and games, and presents big name concerts each year as part of the AT&T
AT&T
AT&T Inc. is an American multinational telecommunications corporation headquartered in Whitacre Tower, Dallas, Texas, United States. It is the largest provider of mobile telephony and fixed telephony in the United States, and is also a provider of broadband and subscription television services...
Borealis Concert Series.

The AT&T Concert Series is a big draw for the Fair, which has played host to dozens of bands and performers over the last 75 years.