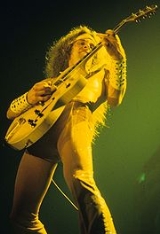 Overview
Theodore Anthony "Ted" Nugent (icon; born December 13, 1948) is an American guitarist
Guitarist
A guitarist is a musician who plays the guitar. Guitarists may play a variety of instruments such as classical guitars, acoustic guitars, electric guitars, and bass guitars. Some guitarists accompany themselves on the guitar while singing.- Versatility :The guitarist controls an extremely...
, musician, singer, author, reserve police officer, and activist. From Detroit, Michigan
Michigan
Michigan is a U.S. state located in the Great Lakes Region of the United States of America. The name Michigan is the French form of the Ojibwa word mishigamaa, meaning "large water" or "large lake"....
, he originally gained fame as the lead guitarist of The Amboy Dukes
The Amboy Dukes
The Amboy Dukes were an American rock music band of the late 1960s and early 1970s from Detroit, Michigan, best remembered for their hit single "Journey to the Center of the Mind", and for launching the career of Ted Nugent...
, before embarking on a lengthy solo career. He is also noted for his conservative political views and his ardent defense of hunting
Hunting
Hunting is the practice of pursuing any living thing, usually wildlife, for food, recreation, or trade. In present-day use, the term refers to lawful hunting, as distinguished from poaching, which is the killing, trapping or capture of the hunted species contrary to applicable law...
and gun ownership
Second Amendment to the United States Constitution
The Second Amendment to the United States Constitution is the part of the United States Bill of Rights that protects the right of the people to keep and bear arms. It was adopted on December 15, 1791, along with the rest of the Bill of Rights.In 2008 and 2010, the Supreme Court issued two Second...
rights.
Nugent was born and raised in Detroit, Michigan, the son of Marion Dorothy (née Johnson) and Warren Henry Nugent.
x