Encyclopedia
The Alaska Governor's Mansion, located at 716 Calhoun Avenue in Juneau
Juneau, Alaska
The City and Borough of Juneau is a unified municipality located on the Gastineau Channel in the panhandle of the U.S. state of Alaska. It has been the capital of Alaska since 1906, when the government of the then-District of Alaska was moved from Sitka as dictated by the U.S. Congress in 1900...
, Alaska
Alaska
Alaska is the largest state in the United States by area. It is situated in the northwest extremity of the North American continent, with Canada to the east, the Arctic Ocean to the north, and the Pacific Ocean to the west and south, with Russia further west across the Bering Strait...
, is the official residence
Official residence
An official residence is the residence at which heads of state, heads of government, gubernatorial or other senior figures officially reside...
of the Governor of Alaska and the governor's family. It was designed by James Knox Taylor
James Knox Taylor
James Knox Taylor was Supervising Architect of the United States Department of the Treasury from 1897 to 1912. His name is listed ex officio as supervising architect of hundreds of federal buildings built throughout the United States during the period.-Early career:The son of H...
. The Governor's Mansion was first occupied during 1912 by Territorial Governor Walter Eli Clark
Walter Eli Clark
Walter Eli Clark was an American journalist and newspaper publisher. In addition to his journalistic activities, he served as the last Governor of the District of Alaska from 1909 to 1912, and the first Governor of Alaska Territory from 1912 to 1913.-Background:Clark was born on January 7, 1869...
. 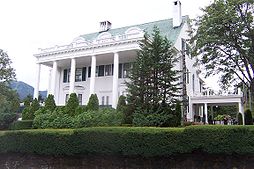 The original budget for the 2½-story 12900 square feet (1,198.4 m²) frame structure and furnishing was $40,000 and included planned servants quarters and a territorial museum on the third floor which were never built.

During 1936 the wood finish of the exterior was plastered over and painted white.

During 1967-68 two guest suites and one large bedroom were added to the third floor.

During 1983 a $2.5 million renovation that restored the interior decor to its original 1912 design also included new heating, electrical, plumbing and security systems.

In its current configuration the number of rooms in the mansion, excluding great hall
Great hall
A great hall is the main room of a royal palace, nobleman's castle or a large manor house in the Middle Ages, and in the country houses of the 16th and early 17th centuries. At that time the word great simply meant big, and had not acquired its modern connotations of excellence...
s, garages, closets, and bathrooms, is twenty-six. There are ten bathrooms, six bedrooms, and eight fireplace
Fireplace
A fireplace is an architectural structure to contain a fire for heating and, especially historically, for cooking. A fire is contained in a firebox or firepit; a chimney or other flue allows gas and particulate exhaust to escape...
s, amounting to a total area of 14400 square feet (1,337.8 m²).