The Airspeed AS.10 Oxford was a twin-engine aircraft used for training British Commonwealth
Commonwealth of Nations
The Commonwealth of Nations, normally referred to as the Commonwealth and formerly known as the British Commonwealth, is an intergovernmental organisation of fifty-four independent member states...
aircrews in navigation, radio-operating, bombing and gunnery during the Second World War
World War II
World War II, or the Second World War , was a global conflict lasting from 1939 to 1945, involving most of the world's nations—including all of the great powers—eventually forming two opposing military alliances: the Allies and the Axis...
. 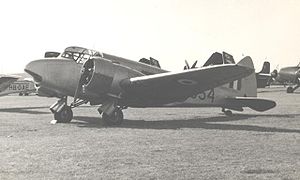 The Oxford, built to Specification T.23/36, was based on Airspeed's commercial 8-seater aircraft, the Airspeed AS.6 Envoy
Airspeed Envoy
The Airspeed AS.6 Envoy was a British light, twin-engined transport aircraft designed and built by Airspeed Ltd. in the 1930s at Portsmouth Aerodrome, Hampshire.-Development and design:...
. Seven of these had been modified for the South African Air Force
South African Air Force
The South African Air Force is the air force of South Africa, with headquarters in Pretoria. It is the world's second oldest independent air force, and its motto is Per Aspera Ad Astra...
as the "Convertible Envoy", which could be equipped at short notice with a single machine-gun in a hand-operated Armstrong Whitworth
Armstrong Whitworth
Sir W G Armstrong Whitworth & Co Ltd was a major British manufacturing company of the early years of the 20th century. Headquartered in Elswick, Newcastle upon Tyne, Armstrong Whitworth engaged in the construction of armaments, ships, locomotives, automobiles, and aircraft.-History:In 1847,...
dorsal turret, and with bomb racks.

Nevil Shute
Nevil Shute
Nevil Shute Norway was a popular British-Australian novelist and a successful aeronautical engineer. He used his full name in his engineering career, and 'Nevil Shute' as his pen name, in order to protect his engineering career from any potential negative publicity in connection with his novels.-...
Norway, later to become a well-known novelist under his first two names, was Managing Director of Airspeed Ltd during its early years and considered himself the "father" of the Envoy and Oxford. His autobiography, Slide Rule: Autobiography of an Engineer
Slide Rule: Autobiography of an Engineer
Slide Rule: Autobiography of an Engineer is the partial autobiography of the British novelist Nevil Shute. It was first published in 1954. Slide Rule concentrates on Nevil Shute's work in aerospace, ending in 1938 when he left the industry....
, gives a fascinating account of the founding of Airspeed Ltd and of the processes that led to the commercialisation of the aircraft. (He received the Fellowship of the Royal Aeronautical Society
Royal Aeronautical Society
The Royal Aeronautical Society, also known as the RAeS, is a multidisciplinary professional institution dedicated to the global aerospace community.-Function:...
for his innovative fitting of a retractable undercarriage to the aircraft.)

A total of 8,586 Oxfords were built, with 4,411 and by Airspeed at its Portsmouth factory, 550 at the Airspeed-run shadow factory
British shadow factories
British shadow factories were a plan developed by the British Government to implement additional manufacturing capacity for the British aircraft industry, in the build up to World War II...
at Christchurch
RAF Christchurch
Christchurch Airfield was located southeast of the A337/B3059 intersection in Somerford, Christchurch, Dorset, England.It was a civil airfield starting from 1926, then it was used during World War II by the Royal Air Force and the United States Army Air Force Ninth Air Force...
, Dorset, 1,515 by de Havilland
De Havilland
The de Havilland Aircraft Company was a British aviation manufacturer founded in 1920 when Airco, of which Geoffrey de Havilland had been chief designer, was sold to BSA by the owner George Holt Thomas. De Havilland then set up a company under his name in September of that year at Stag Lane...
at Hatfield
Hatfield
- Places :Hatfield is the name of several places around the world. It comes from O.E. Haeth field , meaning field of heather.In Australia*Hatfield, New South Wales, located in the Electoral district of Murray-DarlingIn England:...
, 1,360 by Percival Aircraft at Luton
Luton
Luton is a large town and unitary authority of Bedfordshire, England, 30 miles north of London. Luton and its near neighbours, Dunstable and Houghton Regis, form the Luton/Dunstable Urban Area with a population of about 250,000....
and 750 by Standard Motors at Coventry
Coventry
Coventry is a city and metropolitan borough in the county of West Midlands in England. Coventry is the 9th largest city in England and the 11th largest in the United Kingdom. It is also the second largest city in the English Midlands, after Birmingham, with a population of 300,848, although...
.

The Oxford (nicknamed the 'Ox-box') was used to prepare complete aircrews for RAF's
Royal Air Force
The Royal Air Force is the aerial warfare service branch of the British Armed Forces. Formed on 1 April 1918, it is the oldest independent air force in the world...
Bomber Command
RAF Bomber Command
RAF Bomber Command controlled the RAF's bomber forces from 1936 to 1968. During World War II the command destroyed a significant proportion of Nazi Germany's industries and many German cities, and in the 1960s stood at the peak of its postwar military power with the V bombers and a supplemental...
and as such could simultaneously train pilots, navigators, bomb aimers, gunners, or radio operators on the same flight. In addition to training duties, Oxfords were used in communications and anti-submarine roles and as ambulances in the Middle East
Middle East
The Middle East is a region that encompasses Western Asia and Northern Africa. It is often used as a synonym for Near East, in opposition to Far East...
.

The Oxford was the preferred trainer for the Empire Air Training Scheme (EATS) and British Commonwealth Air Training Plan
British Commonwealth Air Training Plan
The British Commonwealth Air Training Plan , known in some countries as the Empire Air Training Scheme , was a massive, joint military aircrew training program created by the United Kingdom, Canada, Australia and New Zealand, during the Second World War...
(BCATP) which sent thousands of potential aircrew to Canada
Canada
Canada is a North American country consisting of ten provinces and three territories. Located in the northern part of the continent, it extends from the Atlantic Ocean in the east to the Pacific Ocean in the west, and northward into the Arctic Ocean...
for training. 27 Oxfords were on the strength of No 4 Flying Training School RAF Habbaniya
RAF Habbaniya
Royal Air Force Station Habbaniya, more commonly known as RAF Habbaniya, was a Royal Air Force station at Habbaniyah, about west of Baghdad in modern day Iraq, on the banks of the Euphrates near Lake Habbaniyah...
, Iraq
Iraq
Iraq ; officially the Republic of Iraq is a country in Western Asia spanning most of the northwestern end of the Zagros mountain range, the eastern part of the Syrian Desert and the northern part of the Arabian Desert....
in early 1941 and some were converted locally for use as Light Bombers to help in the successful defence of the School against threatening and attacking Iraqi forces.

In 1941, the aviatrix Amy Johnson
Amy Johnson
Amy Johnson CBE, was a pioneering English aviator. Flying solo or with her husband, Jim Mollison, Johnson set numerous long-distance records during the 1930s...
went missing in an Airspeed Oxford, presumably crashing into the Thames Estuary
Thames Estuary
The Thames Mouth is the estuary in which the River Thames meets the waters of the North Sea.It is not easy to define the limits of the estuary, although physically the head of Sea Reach, near Canvey Island on the Essex shore is probably the western boundary...
.

Although the Oxford was equipped with fixed-pitch Fairey-Reed propeller
Propeller (aircraft)
Aircraft propellers or airscrews convert rotary motion from piston engines or turboprops to provide propulsive force. They may be fixed or variable pitch. Early aircraft propellers were carved by hand from solid or laminated wood with later propellers being constructed from metal...
s, the cockpit contained a propeller pitch lever which had to be moved from "Coarse" to "Fine" for landing. This was done to reinforce this important step for training pilots. The Oxford had a tendency to yaw
Flight dynamics
Flight dynamics is the science of air vehicle orientation and control in three dimensions. The three critical flight dynamics parameters are the angles of rotation in three dimensions about the vehicle's center of mass, known as pitch, roll and yaw .Aerospace engineers develop control systems for...
due to the "handing" or rotation of the engines, inducing p-factor
P-factor
P-factor, also known as asymmetric blade effect and asymmetric disc effect, is an aerodynamic phenomenon experienced by a moving propeller, that is responsible for asymmetrical relocation of the propeller's center of thrust when aircraft is at a high angle of attack.- Causes :When an aircraft is in...
. This condition was nearly impossible to correct by trimming the aircraft and landings could be tricky with a tendency for the aircraft to ground loop
Ground loop (aviation)
In aviation, a ground loop is a rapid rotation of a fixed-wing aircraft in the horizontal plane while on the ground. Aerodynamic forces may cause the advancing wing to rise, which may then cause the other wingtip to touch the ground...
.

Oxfords continued to serve the Royal Air Force as trainers and light transports until the last was withdrawn from service in 1956. Some were sold for use by overseas air arms, including the Royal Belgian Air Force.

To produce the Oxford I for the Royal Air Force
Royal Air Force
The Royal Air Force is the aerial warfare service branch of the British Armed Forces. Formed on 1 April 1918, it is the oldest independent air force in the world...
, Airspeed increased the wingspan, modified the nose and employed fully cowled
Cowling
A cowling is the covering of a vehicle's engine, most often found on automobiles and aircraft.A cowling may be used:* for drag reduction* for engine cooling by directing airflow* as an air intake for jet engines* for decorative purposes...
Armstrong Siddeley Cheetah IX radial engine
Radial engine
The radial engine is a reciprocating type internal combustion engine configuration in which the cylinders point outward from a central crankshaft like the spokes on a wheel...
s of 355 hp (265 kW). The first Mark I flew on 19 June 1937 and entered service with the Central Flying School in November of that year. By the start of the war, about 300 Mk I Oxfords were in service with the RAF, while a number were also being used by the Royal New Zealand Air Force
Royal New Zealand Air Force
The Royal New Zealand Air Force is the air arm of the New Zealand Defence Force...
to train pilots for the RAF.

Powered by two Cheetah XV engines with 425 hp (315 kW) and Rotol
Dowty Rotol
Dowty Rotol is a British engineering company based in Cheltenham specialised in the manufacture of propellers and propeller components. It is owned by General Electric, forming part of its GE Aviation Systems division.-History:...
constant-speed propellers, used for navigation and radio training.

Only 9 of these were built, eight of them being conversions of Mk Is.

Oxford I to meet Specification T.39/37 for New Zealand.

Survey variant of the AS.42

After the end of WWII, over 150 aircraft surplus ex-RAF Oxfords were converted for civilian transport operation; this type was known as the Airspeed Consul
Airspeed Consul
-See also:-References:...
.