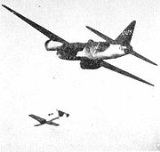 Encyclopedia
Airborne aircraft carriers are aircraft which can launch other aircraft. These typically are large aircraft that launch fighter-interceptor planes.

Several plans were drawn up to outfit Zeppelin
Zeppelin
A Zeppelin is a type of rigid airship pioneered by the German Count Ferdinand von Zeppelin in the early 20th century. It was based on designs he had outlined in 1874 and detailed in 1893. His plans were reviewed by committee in 1894 and patented in the United States on 14 March 1899...
-type dirigible airship
Airship
An airship or dirigible is a type of aerostat or "lighter-than-air aircraft" that can be steered and propelled through the air using rudders and propellers or other thrust mechanisms...
s to launch and recover fighters. These are also the typical airborne aircraft carriers found in fiction. Working prototypes include:


These dirigible aircraft carriers all utilized an internal hangar bay using a "trapeze" to hold the aircraft. However during the 1940s many alternate plans were drawn that were not realized. A popular proposal was a rigid runway situated on the top of the dirigible for both take off and landings of planes, and an elevator to move the aircraft into the hangar located inside the main assembly. This would allow a relatively innocuous vehicle to field a large amount of aircraft. These plans were abandoned due to weight/lift ratio of the dirigible and the lost internal gas space (thus reducing the lift) due to the installation of a large hangar. A trapeze arrangement was deployed more practicably on boats using the Brodie landing system
Brodie landing system
The Brodie landing system was a method of landing light aeroplane devised by James H Brodie, a Captain of the United States Air Force during World War II. The method of landing involved catching a hook attached to the plane with a sling which itself was attached to a cable...
later in WWII. 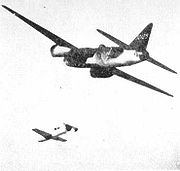 During World War II
World War II
World War II, or the Second World War , was a global conflict lasting from 1939 to 1945, involving most of the world's nations—including all of the great powers—eventually forming two opposing military alliances: the Allies and the Axis...
the Japanese navy developed the rocket-powered Kamikaze aircraft Ohka
Ohka
The Yokosuka MXY-7 Ohka was a purpose-built, rocket powered human-guided anti-shipping kamikaze attack plane employed by Japan towards the end of World War II...
and due to the short range of the rocket, it was launched by a Mitsubishi G4M
Mitsubishi G4M
The Mitsubishi G4M 一式陸上攻撃機, 一式陸攻 Isshiki rikujō kōgeki ki, Isshikirikkō was the main twin-engine, land-based bomber used by the Imperial Japanese Navy Air Service in World War II. The Allies gave the G4M the reporting name Betty...
bomber when close to a target ship.

Several bombers have been used by NASA as launch platforms for experimental aircraft.

A few specific aircraft have been built or modified to transport other aircraft; the most famous of these, a pair of modified Boeing 747
Boeing 747
The Boeing 747 is a wide-body commercial airliner and cargo transport, often referred to by its original nickname, Jumbo Jet, or Queen of the Skies. It is among the world's most recognizable aircraft, and was the first wide-body ever produced...
s known as the Shuttle Carrier Aircraft
Shuttle Carrier Aircraft
The Shuttle Carrier Aircraft are two extensively modified Boeing 747 airliners that NASA uses to transport Space Shuttle orbiters...
(SCA) belonging to the United State's National Aeronautics and Space Administration (NASA
NASA
The National Aeronautics and Space Administration is the agency of the United States government that is responsible for the nation's civilian space program and for aeronautics and aerospace research...
), and are now used only to transport the US Space Shuttle
Space Shuttle
The Space Shuttle was a manned orbital rocket and spacecraft system operated by NASA on 135 missions from 1981 to 2011. The system combined rocket launch, orbital spacecraft, and re-entry spaceplane with modular add-ons...
Orbiter
Space Shuttle Orbiter
The Space Shuttle orbiter was the orbital spacecraft of the Space Shuttle program operated by NASA, the space agency of the United States. The orbiter was a reusable winged "space-plane", a mixture of rockets, spacecraft, and aircraft...
vehicle, though one was used by the Space Shuttle Enterprise
Space Shuttle Enterprise
The Space Shuttle Enterprise was the first Space Shuttle orbiter. It was built for NASA as part of the Space Shuttle program to perform test flights in the atmosphere. It was constructed without engines or a functional heat shield, and was therefore not capable of spaceflight...
to actually launch the orbiter for atmospheric approach and landing tests. The Soviet Union
Soviet Union
The Soviet Union , officially the Union of Soviet Socialist Republics , was a constitutionally socialist state that existed in Eurasia between 1922 and 1991....
created a similar vehicle (the Antonov An-225
Antonov An-225
The Antonov An-225 Mriya is a strategic airlift cargo aircraft, designed by the Antonov Design Bureau in the 1980s. It is the world's heaviest aircraft. The design, built in order to transport the Buran orbiter, was an enlargement of the successful An-124 Ruslan...
) to support the Buran spacecraft.

More recently, White Knight has been used to launch the Space Ship One privately owned space craft, and is slated to be used for a follow on design.