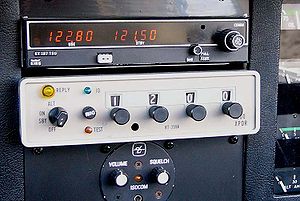 Airband or Aircraft band is the name for a group of frequencies
Frequency
Frequency is the number of occurrences of a repeating event per unit time. It is also referred to as temporal frequency.The period is the duration of one cycle in a repeating event, so the period is the reciprocal of the frequency...
in the VHF radio spectrum
Radio spectrum
Radio spectrum refers to the part of the electromagnetic spectrum corresponding to radio frequencies – that is, frequencies lower than around 300 GHz ....
allocated to radio communication in civil aviation
Aviation
Aviation is the design, development, production, operation, and use of aircraft, especially heavier-than-air aircraft. Aviation is derived from avis, the Latin word for bird.-History:...
, sometimes also referred to as VHF, or phonetically as "Victor". Different sections of the band are used for radionavigational aid
Radio navigation
Radio navigation or radionavigation is the application of radio frequencies to determine a position on the Earth. Like radiolocation, it is a type of radiodetermination.The basic principles are measurements from/to electric beacons, especially...
s and air traffic control
Air traffic control
Air traffic control is a service provided by ground-based controllers who direct aircraft on the ground and in the air. The primary purpose of ATC systems worldwide is to separate aircraft to prevent collisions, to organize and expedite the flow of traffic, and to provide information and other...
.

The airband uses the frequencies between 108 MHz
Hertz
The hertz is the SI unit of frequency defined as the number of cycles per second of a periodic phenomenon. One of its most common uses is the description of the sine wave, particularly those used in radio and audio applications....
and 137 MHz. The lower part of the band, from 108 to 117.975 MHz, is split into 200 narrow-band channels. These are reserved for navigational aids such as VOR
VHF omnidirectional range
VOR, short for VHF omnidirectional radio range, is a type of radio navigation system for aircraft. A VOR ground station broadcasts a VHF radio composite signal including the station's identifier, voice , and navigation signal. The identifier is typically a two- or three-letter string in Morse code...
beacon
Beacon
A beacon is an intentionally conspicuous device designed to attract attention to a specific location.Beacons can also be combined with semaphoric or other indicators to provide important information, such as the status of an airport, by the colour and rotational pattern of its airport beacon, or of...
s, fan marker beacons, Automatic Terminal Information Service
Automatic Terminal Information Service
Automatic Terminal Information Service, or ATIS, is a continuous broadcast of recorded noncontrol information in busier terminal areas. ATIS broadcasts contain essential information, such as weather information, which runways are active, available approaches, and any other information required by...
(ATIS) and Automated Surface Observing System  (ASOS) messages, and precision approach systems such as ILS
Instrument Landing System
An instrument landing system is a ground-based instrument approach system that provides precision guidance to an aircraft approaching and landing on a runway, using a combination of radio signals and, in many cases, high-intensity lighting arrays to enable a safe landing during instrument...
localizers or LAAS
Local Area Augmentation System
The Local Area Augmentation System is an all-weather aircraft landing system based on real-time differential correction of the GPS signal. Local reference receivers located around the airport send data to a central location at the airport. This data is used to formulate a correction message, which...
.

As of 2011 there were 760 channels available for amplitude modulation
Amplitude modulation
Amplitude modulation is a technique used in electronic communication, most commonly for transmitting information via a radio carrier wave. AM works by varying the strength of the transmitted signal in relation to the information being sent...
voice transmissions, in the 118 - 137 MHz section of the band. Some channels between 123.100 and 135.950 are available to other users such as government agencies, commercial company advisory, search and rescue
Search and rescue
Search and rescue is the search for and provision of aid to people who are in distress or imminent danger.The general field of search and rescue includes many specialty sub-fields, mostly based upon terrain considerations...
, military aircraft, glider and ballooning air-to-ground and national aviation authority use. A typical transmission range of an aircraft flying at cruise altitude (35,000 ft), is about 200 miles in good weather conditions.

Aeronautical voice communication is also conducted in other frequency bands, including satellite voice on Inmarsat
Inmarsat
Inmarsat plc is a British satellite telecommunications company, offering global, mobile services. It provides telephony and data services to users worldwide, via portable or mobile terminals which communicate to ground stations through eleven geostationary telecommunications satellites...
and high frequency
High frequency
High frequency radio frequencies are between 3 and 30 MHz. Also known as the decameter band or decameter wave as the wavelengths range from one to ten decameters . Frequencies immediately below HF are denoted Medium-frequency , and the next higher frequencies are known as Very high frequency...
voice in the North Atlantic and remote areas. Military aircraft also use a dedicated UHF-AM band from 220.0-399.95 MHz for air-to-air and air-to-ground, including air traffic control communication. This band has a designated emergency and guard channel of 243.0 MHz.

Some types of navaids, such as Non-directional beacon
Non-directional beacon
A non-directional beacon is a radio transmitter at a known location, used as an aviation or marine navigational aid. As the name implies, the signal transmitted does not include inherent directional information, in contrast to other navigational aids such as low frequency radio range, VHF...
s and Distance Measuring Equipment
Distance Measuring Equipment
Distance measuring equipment is a transponder-based radio navigation technology that measures distance by timing the propagation delay of VHF or UHF radio signals....
, do not operate on these frequencies; in the case of NDBs the Low frequency
Low frequency
Low frequency or low freq or LF refers to radio frequencies in the range of 30 kHz–300 kHz. In Europe, and parts of Northern Africa and of Asia, part of the LF spectrum is used for AM broadcasting as the longwave band. In the western hemisphere, its main use is for aircraft beacon,...
and Medium frequency
Medium frequency
Medium frequency refers to radio frequencies in the range of 300 kHz to 3 MHz. Part of this band is the medium wave AM broadcast band. The MF band is also known as the hectometer band or hectometer wave as the wavelengths range from ten down to one hectometers...
bands are used between 190–415 kHz and 510–535 kHz. The ILS glide path operates in the UHF frequency range of 329.3 to 335.0 MHz and DME also operates in the UHF band.

Channel spacing for voice communication on the airband was originally 100 kHz, this bandwidth was subsequently split to 50, and more recently 25 kHz to provide 720 usable channels. On 1 January 1990 the frequencies between 136.000 and 136.975 MHz were added, resulting in 760 channels.

The emergency communication channel 121.5 MHz is the only channel that retains 100 kHz bandwidth. However, increasing air traffic congestion has led to further subdivision into narrow-band 8.33 kHz channels in the ICAO European region; all aircraft flying above 19,500 feet are required to have communication equipment for this channel spacing.

A switch to digital radio
Digital radio
Digital radio has several meanings:1. Today the most common meaning is digital radio broadcasting technologies, such as the digital audio broadcasting system, also known as Eureka 147. In these systems, the analog audio signal is digitized into zeros and ones, compressed using formats such as...
s has been contemplated, as this would greatly increase capacity
Channel capacity
In electrical engineering, computer science and information theory, channel capacity is the tightest upper bound on the amount of information that can be reliably transmitted over a communications channel...
by reducing the bandwidth required to transmit speech. Other beneifts from digital coding of voice transmissions include decreased susceptibility to electrical interference and jamming. The change-over to digital radio has yet to happen, partly because the mobility of aircraft necessitates complete international cooperation to move to a new system and also the time implementation for subsequent changeover.

It is illegal to broadcast on the Airband frequencies without a suitable license. Many countries' regulations also restrict communications in the airband. For instance in Canada
Canada
Canada is a North American country consisting of ten provinces and three territories. Located in the northern part of the continent, it extends from the Atlantic Ocean in the east to the Pacific Ocean in the west, and northward into the Arctic Ocean...
airband communications are limited to those required for "the safety and navigation of an aircraft; the general operation of the aircraft; and the exchange of messages on behalf of the public. In addition, a person may operate radio apparatus only to transmit a non-superfluous signal or a signal containing non-profane or non-obscene radiocommunications."

While it is not an offence to listen to voice transmissions in the airband frequencies, it may be an offence to possess such equipment in certain countries. Instances of such illegal activity has been the subject of international situations between governments when tourists bring airband equipment into countries which ban the possession and use of such equipment.