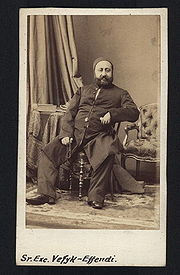 Ahmet Vefik Pasha was born of Greek
Greeks
The Greeks, also known as the Hellenes , are a nation and ethnic group native to Greece, Cyprus and neighboring regions. They also form a significant diaspora, with Greek communities established around the world....
extraction, his ancestors having previously converted to Islam
Islam
Islam . The most common are and .   : Arabic pronunciation varies regionally. The first vowel ranges from ~~. The second vowel ranges from ~~~...
. He started his education in 1831 in Constantinople
Constantinople
Constantinople was the capital of the Roman, Eastern Roman, Byzantine, Latin, and Ottoman Empires. Throughout most of the Middle Ages, Constantinople was Europe's largest and wealthiest city.-Names:...
and later went to Paris
Paris
Paris is the capital and largest city in France, situated on the river Seine, in northern France, at the heart of the Île-de-France region...
with his family where he graduated from Saint Louis College
Lycée Saint-Louis
The lycée Saint-Louis is a higher education establishment located in the VIe arrondissement of Paris, in the Latin Quarter. It is the only public French lycée exclusively dedicated to classes préparatoires aux grandes écoles...
. When he became the ambassador to Tehran
Tehran
Tehran , sometimes spelled Teheran, is the capital of Iran and Tehran Province. With an estimated population of 8,429,807; it is also Iran's largest urban area and city, one of the largest cities in Western Asia, and is the world's 19th largest city.In the 20th century, Tehran was subject to...
, he learned the Persian language. In Tehran, he was the first person to raise his country's flag in an embassy. He declared the embassy soil a Turkish land and started this custom. He was a pioneer of the Pan-Turkism
Pan-Turkism
Pan-Turkism is a nationalist movement that emerged in 1880s among the Turkic intellectuals of the Russian Empire, with the aim of cultural and political unification of all Turkic peoples.-Name:...
movement. He became the Minister of Education and grand vizier two times. He built a theatre in Bursa when he was made the governor of the city. In 1860, he became the ambassador to France. He wrote the first Turkish Dictionary. He is considered to be the first Turkist of the Ottoman Turks.
The source of this article is wikipedia, the free encyclopedia.  The text of this article is licensed under the GFDL.