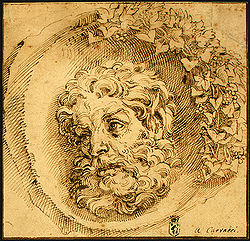 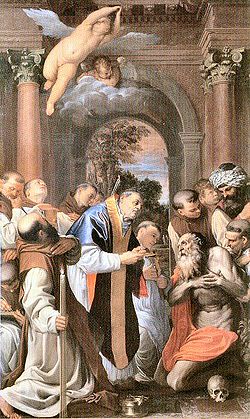 Agostino Carracci (16 August 1557 – 22 March 1602) was an Italian
Italy
Italy , officially the Italian Republic languages]] under the European Charter for Regional or Minority Languages. In each of these, Italy's official name is as follows:;;;;;;;;), is a unitary parliamentary republic in South-Central Europe. To the north it borders France, Switzerland, Austria and...
painter
Painting
Painting is the practice of applying paint, pigment, color or other medium to a surface . The application of the medium is commonly applied to the base with a brush but other objects can be used. In art, the term painting describes both the act and the result of the action. However, painting is...
and printmaker. He was the brother of the more famous Annibale
Annibale Carracci
Annibale Carracci was an Italian Baroque painter.-Early career:Annibale Carracci was born in Bologna, and in all likelihood first apprenticed within his family...
and cousin of Lodovico Carracci.

He posited the ideal in nature, and was the founder of the competing school to the more gritty (for lack of a better term) view of nature as expressed by Caravaggio. He was one of the founders of the Accademia degli Incamminati
Accademia degli Incamminati
The Accademia degli Incamminati was one of the first art academies in Italy. It was originally created around 1580 in Bologna as the Accademia dei Desiderosi and was sometimes known as the Accademia dei Carracci after its founders the Carracci cousins , with Annibale heading the institution thanks...
along with his brother, Annibale Carracci, and cousin, Ludovico Carracci. The academy helped propel painters of the School of Bologna
Bolognese School (painting)
The Bolognese School or the School of Bologna of painting flourished in Bologna, the capital of Emilia Romagna, between the 16th and 17th centuries in Italy, and rivalled Florence and Rome as the center of painting. Its most important representatives include the Carracci family, including Ludovico...
to prominence.

Agostino Carracci was born in Bologna
Bologna
Bologna is the capital city of Emilia-Romagna, in the Po Valley of Northern Italy. The city lies between the Po River and the Apennine Mountains, more specifically, between the Reno River and the Savena River. Bologna is a lively and cosmopolitan Italian college city, with spectacular history,...
, and trained at the workshop of the architect Domenico Tibaldi. Starting from 1574 he worked as a reproductive engraver, copying works of 16th century masters such as Federico Barocci
Federico Barocci
Federico Barocci was an Italian Renaissance painter and printmaker. His original name was Federico Fiori, and he was nicknamed Il Baroccio, which still in northwestern Italian dialects means a two wheel cart drawn by oxen...
, Tintoretto
Tintoretto
Tintoretto , real name Jacopo Comin, was a Venetian painter and a notable exponent of the Renaissance school. For his phenomenal energy in painting he was termed Il Furioso...
, Antonio Campi
Antonio Campi
Antonio Campi was an Italian painter of the Renaissance.He was born in Cremona. His style merges Lombard with Mannerist styles. In Cremona, his extended family were the main artistic produce. Giulio Campi and Antonio were reportedly half-brothers, while Vincenzo Campi was a full brother....
, Veronese
Paolo Veronese
Paolo Veronese was an Italian painter of the Renaissance in Venice, famous for paintings such as The Wedding at Cana and The Feast in the House of Levi...
and Correggio. He also produced some original prints, including two etching
Etching
Etching is the process of using strong acid or mordant to cut into the unprotected parts of a metal surface to create a design in intaglio in the metal...
s.

In 1598 Carracci joined his brother Annibale in Rome, to collaborate on the decoration of the Gallery in Palazzo Farnese
Palazzo Farnese, Rome
Palazzo Farnese is a High Renaissance palace in Rome, which currently houses the French embassy and the Ecole Française de Rome ....
. From 1598–1600 is a triple Portrait, now in Naples
Naples
Naples is a city in Southern Italy, situated on the country's west coast by the Gulf of Naples. Lying between two notable volcanic regions, Mount Vesuvius and the Phlegraean Fields, it is the capital of the region of Campania and of the province of Naples...
, an example of genre painting.

In 1600 he was called to Parma by Duke Ranuccio I Farnese to began the decoration of the Palazzo del Giardino, but he died before it was finished.

Agostino's son Antonio Carracci
Antonio Marziale Carracci
Antonio Marziale Carracci was an Italian painter. He was the natural son of Agostino Carracci.-Life:Carracci was born in the parish of Sta Lucia in Venice, probably in 1583, the product of an affair with a courtesan called Isabella, occurring on his father first visit to Venice...
was also a painter, and attempted to compete with his father's Academy.