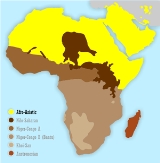 Overview
The Afroasiatic languages (alternatively Afro-Asiatic), also known as Hamito-Semitic, constitute one of the world's largest language families
Language family
A language family is a group of languages related through descent from a common ancestor, called the proto-language of that family. The term 'family' comes from the tree model of language origination in historical linguistics, which makes use of a metaphor comparing languages to people in a...
, with about 375 living languages. The phylum is spoken by 200 to 300 million people primarily spread throughout the Middle East
Middle East
The Middle East is a region that encompasses Western Asia and Northern Africa. It is often used as a synonym for Near East, in opposition to Far East...
, North Africa
North Africa
North Africa or Northern Africa is the northernmost region of the African continent, linked by the Sahara to Sub-Saharan Africa. Geopolitically, the United Nations definition of Northern Africa includes eight countries or territories; Algeria, Egypt, Libya, Morocco, South Sudan, Sudan, Tunisia, and...
, the Horn of Africa
Horn of Africa
The Horn of Africa is a peninsula in East Africa that juts hundreds of kilometers into the Arabian Sea and lies along the southern side of the Gulf of Aden. It is the easternmost projection of the African continent...
, and parts of the Sahel
Sahel
The Sahel is the ecoclimatic and biogeographic zone of transition between the Sahara desert in the North and the Sudanian Savannas in the south.It stretches across the North African continent between the Atlantic Ocean and the Red Sea....
.

The most widely-spoken Afroasiatic language is Arabic, including all its colloquial varieties
Varieties of Arabic
The Arabic language is a Semitic language characterized by a wide number of linguistic varieties within its five regional forms. The largest divisions occur between the spoken languages of different regions. The Arabic of North Africa, for example, is often incomprehensible to an Arabic speaker...
, with 230 million native speakers, spoken mostly in the Middle East and North Africa.

I am wondering why in the anti-atlas montains in morocco some berbers (chleuh)look like asian people and also their music sounds like asian music?
More

Why should there even be an Asia in Afro-Asiatic; should it not simply be Afrasan?
More
x