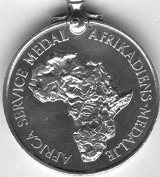 Encyclopedia
The Africa Service Medal was a South Africa
South Africa
The Republic of South Africa is a country in southern Africa. Located at the southern tip of Africa, it is divided into nine provinces, with of coastline on the Atlantic and Indian oceans...
n campaign medal for service in World War II
World War II
World War II, or the Second World War , was a global conflict lasting from 1939 to 1945, involving most of the world's nations—including all of the great powers—eventually forming two opposing military alliances: the Allies and the Axis...
. It was instituted by King George VI
George VI of the United Kingdom
George VI was King of the United Kingdom and the Dominions of the British Commonwealth from 11 December 1936 until his death...
, in his capacity as South African head of state, on 23 December 1943, and was awarded in addition to the British stars and medals issued for the war. The medal was granted to members of the Union Defence Forces
South African National Defence Force
The South African National Defence Force is the armed forces of South Africa. The military as it exists today was created in 1994, following South Africa's first post-apartheid national elections and the adoption of a new constitution...
, the South African Police
South African Police
The South African Police was the country's police force until 1994. The SAP traced its origin to the Dutch Watch, a paramilitary organization formed by settlers in the Cape in 1655, initially to protect civilians against attack and later to maintain law and order...
, and the South African Railways Police.

To qualify for the medal, a member of those services must have volunteered for war service outside South Africa, and have served continuously for thirty days, or part-time for a total of eighteen hours, between 6 September 1939 and 2 September 1945. As the name indicates, the medal was originally intended for service in Africa, up to the defeat of the Axis forces in North Africa 1943, but it was later extended to cover service anywhere in the world, right up to the end of the war.

The medal is silver. The design was suggested by Field Marshal
Field Marshal
Field Marshal is a military rank. Traditionally, it is the highest military rank in an army.-Etymology:The origin of the rank of field marshal dates to the early Middle Ages, originally meaning the keeper of the king's horses , from the time of the early Frankish kings.-Usage and hierarchical...
J.C. Smuts. The obverse depicts a map of Africa, surrounded by the name of the medal in English, Africa Service Medal and Afrikaans, Afrikadiens-medalje. The reverse depicts a springbok prancing through the veld.

The ribbon is orange-red (the colour of the shoulder flash worn by South African volunteers), edged in green and gold (the "springbok" sporting colours, which were adopted as the defence force colours).

World War II ex-servicemen
Ex-service
Ex-service is a British term which refers to those who have served in the British Empire or Commonwealth Armed Forces. Earlier, the term ex-servicemen or Ex-servicewomen was used, but has been replaced with one having no gender connotations....
referred to the ribbon of this medal as "Ouma's Garter". "Ouma" (i.e. "Granny") Smuts was the wife of the South African World War II prime minister
Prime minister
A prime minister is the most senior minister of cabinet in the executive branch of government in a parliamentary system. In many systems, the prime minister selects and may dismiss other members of the cabinet, and allocates posts to members within the government. In most systems, the prime...
, Field Marshal
Field Marshal
Field Marshal is a military rank. Traditionally, it is the highest military rank in an army.-Etymology:The origin of the rank of field marshal dates to the early Middle Ages, originally meaning the keeper of the king's horses , from the time of the early Frankish kings.-Usage and hierarchical...
Jan Smuts
Jan Smuts
Jan Christiaan Smuts, OM, CH, ED, KC, FRS, PC was a prominent South African and British Commonwealth statesman, military leader and philosopher. In addition to holding various cabinet posts, he served as Prime Minister of the Union of South Africa from 1919 until 1924 and from 1939 until 1948...
. The nickname
Nickname
A nickname is "a usually familiar or humorous but sometimes pointed or cruel name given to a person or place, as a supposedly appropriate replacement for or addition to the proper name.", or a name similar in origin and pronunciation from the original name....
was a tribute to her unstinting efforts to supply the South African troops with home comforts.

A bronze King protea flower emblem was authorised, to be worn on the ribbon of the Africa Service Medal, for valuable services in connection with the Second World War. It could be awarded posthumously and was the equivalent of a Mention in Despatches for services rendered away from the battle
Battle
Generally, a battle is a conceptual component in the hierarchy of combat in warfare between two or more armed forces, or combatants. In a battle, each combatant will seek to defeat the others, with defeat determined by the conditions of a military campaign...
field.