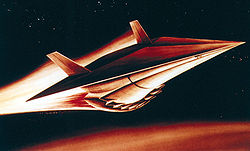 The US Air Force's aerospaceplane project encompassed a variety of projects from 1958 until 1963 to study a fully reusable spaceplane
Spaceplane
A spaceplane is a vehicle that operates as an aircraft in Earth's atmosphere, as well as a spacecraft when it is in space. It combines features of an aircraft and a spacecraft, which can be thought of as an aircraft that can endure and maneuver in the vacuum of space or likewise a spacecraft that...
. A variety of designs were studied during the lifetime of the project, including most of the early efforts on liquid air cycle engine
Liquid air cycle engine
A Liquid Air Cycle Engine is a type of spacecraft propulsion engine that attempts to increase its efficiency by gathering part of its oxidizer from the atmosphere...
s (LACE) and even a nuclear-powered
Nuclear propulsion
Nuclear propulsion includes a wide variety of propulsion methods that fulfil the promise of the Atomic Age by using some form of nuclear reaction as their primary power source.- Surface ships and submarines :...
ramjet
Ramjet
A ramjet, sometimes referred to as a stovepipe jet, or an athodyd, is a form of airbreathing jet engine using the engine's forward motion to compress incoming air, without a rotary compressor. Ramjets cannot produce thrust at zero airspeed and thus cannot move an aircraft from a standstill...
.

The effort was started largely due to the work of Weldon Worth at the Wright-Patterson AFB, who published a short work outlining a manned spaceplane. AF officials were interested enough to start SR-89774 (study requirement-) for a reusable spaceplane in 1957. By 1959 this work had resulted in the Recoverable Orbital Launch System, or ROLS, based around a LACE engine, known at the time as a Liquid Air Collection System, or LACES.

Further work showed that more performance could be gained by extracting only the oxygen from the liquid air
Liquid air
Liquid air is air that has been cooled to very low temperatures so that it has condensed to a pale blue mobile liquid. To protect it from room temperature, it must be kept in a vacuum flask. Liquid air can absorb heat rapidly and revert to its gaseous state...
, a system they referred to as Air Collection and Enrichment System, or ACES. A contract to develop an ACES testbed
Testbed
A testbed is a platform for experimentation of large development projects. Testbeds allow for rigorous, transparent, and replicable testing of scientific theories, computational tools, and new technologies.The term is used across many disciplines to describe a development environment that is...
was placed with Marquardt and General Dynamics
General Dynamics
General Dynamics Corporation is a U.S. defense conglomerate formed by mergers and divestitures, and as of 2008 it is the fifth largest defense contractor in the world. Its headquarters are in West Falls Church , unincorporated Fairfax County, Virginia, in the Falls Church area.The company has...
, with Garrett AiResearch
Garrett AiResearch
Garrett AiResearch was a manufacturer of turboprop engines and turbochargers, and a pioneer in numerous aerospace technologies. It was previously known as Aircraft Tool and Supply Company, Garrett Supply Company, AiResearch Manufacturing Company, or simply AiResearch...
building the heat exchanger
Heat exchanger
A heat exchanger is a piece of equipment built for efficient heat transfer from one medium to another. The media may be separated by a solid wall, so that they never mix, or they may be in direct contact...
for cooling the air. The original ACES design was fairly complex; the air was first liquified in the heat exchanger cooled by liquid hydrogen
Liquid hydrogen
Liquid hydrogen is the liquid state of the element hydrogen. Hydrogen is found naturally in the molecular H2 form.To exist as a liquid, H2 must be pressurized above and cooled below hydrogen's Critical point. However, for hydrogen to be in a full liquid state without boiling off, it needs to be...
fuel, then pumped into a low pressure tank for short term storage. From there it was then pumped into a high pressure tank where the oxygen was separated and the rest (mostly nitrogen) was dumped overboard. In late 1960 and early 1961 a 125 N demonstrator engine was being operated for up to five minutes at a time.

In early 1960 Air Force offered a development contract to build a spaceplane with a crew of three that could take off from any runway and fly directly into orbit and return. They wanted the design to be in operation in 1970 for a total development cost of only $5 billion. Boeing
Boeing
The Boeing Company is an American multinational aerospace and defense corporation, founded in 1916 by William E. Boeing in Seattle, Washington. Boeing has expanded over the years, merging with McDonnell Douglas in 1997. Boeing Corporate headquarters has been in Chicago, Illinois since 2001...
, Douglas, Convair
Convair
Convair was an American aircraft manufacturing company which later expanded into rockets and spacecraft. The company was formed in 1943 by the merger of Vultee Aircraft and Consolidated Aircraft, and went on to produce a number of pioneering aircraft, such as the Convair B-36 bomber, and the F-102...
, Lockheed
Lockheed Corporation
The Lockheed Corporation was an American aerospace company. Lockheed was founded in 1912 and later merged with Martin Marietta to form Lockheed Martin in 1995.-Origins:...
, Goodyear
Goodyear Tire and Rubber Company
The Goodyear Tire & Rubber Company was founded in 1898 by Frank Seiberling. Goodyear manufactures tires for automobiles, commercial trucks, light trucks, SUVs, race cars, airplanes, farm equipment and heavy earth-mover machinery....
, North American
North American Aviation
North American Aviation was a major US aerospace manufacturer, responsible for a number of historic aircraft, including the T-6 Texan trainer, the P-51 Mustang fighter, the B-25 Mitchell bomber, the F-86 Sabre jet fighter, the X-15 rocket plane, and the XB-70, as well as Apollo Command and Service...
, and Republic all responded. Most of these designs ignored the ACES system and instead used a scramjet
Scramjet
A scramjet is a variant of a ramjet airbreathing jet engine in which combustion takes place in supersonic airflow...
for power. The scramjet had first been outlined at about the same time as the original LACES design in a NASA
NASA
The National Aeronautics and Space Administration is the agency of the United States government that is responsible for the nation's civilian space program and for aeronautics and aerospace research...
paper of 1958, and many companies were highly interested in seeing it develop, perhaps none more than Marquardt, whose ramjet
Ramjet
A ramjet, sometimes referred to as a stovepipe jet, or an athodyd, is a form of airbreathing jet engine using the engine's forward motion to compress incoming air, without a rotary compressor. Ramjets cannot produce thrust at zero airspeed and thus cannot move an aircraft from a standstill...
business was dwindling with the introduction of newer jet engines and who had already started work on the scramjet
Scramjet
A scramjet is a variant of a ramjet airbreathing jet engine in which combustion takes place in supersonic airflow...
. Both Alexander Kartveli
Alexander Kartveli
Alexander Kartveli 1896–1974, born Kartvelishvili) was a famous and influential aircraft engineer and a pioneer of American aviation history. Kartveli achieved important breakthroughs in military aviation in the time of turbojet fighters...
and Antonio Ferri
Antonio Ferri
Antonio Ferri was an Italian scientist, prominent in the field of aerodynamics, with a specialization in hypersonic and supersonic flight....
were proponents of the scramjet approach. Ferri successfully demonstrated a scramjet producing net thrust in November 1964, eventually producing 517 lbf, about 80% of his goal.

Later that year a review suggested that the basic concepts of the aerospaceplane were far too new for development of an operational system to begin. They pointed out that far too much was being spent on development of the aircraft, and not nearly enough on basic research. Moreover, the designs were all extremely sensitive to weight, and any increase (and there always is one) could result in all of the designs not working. In 1963 the Air Force changed their priorities in SR-651, and focused entirely on development of a variety of high-speed engines. Included were LACES and ACES engines, as well scramjets, turboramjets and a "normal" (subsonic combustion) ramjet with an intake suitable for use up to Mach
Mach number
Mach number is the speed of an object moving through air, or any other fluid substance, divided by the speed of sound as it is in that substance for its particular physical conditions, including those of temperature and pressure...
8. In October a further review concluded that the technology was simply too new for anyone to predict when any such aerospaceplane could ever be built, and funding was wound down in 1964.
The source of this article is wikipedia, the free encyclopedia.  The text of this article is licensed under the GFDL.