Encyclopedia
Adverse yaw is a yaw moment on an aircraft
Aircraft
An aircraft is a vehicle that is able to fly by gaining support from the air, or, in general, the atmosphere of a planet. An aircraft counters the force of gravity by using either static lift or by using the dynamic lift of an airfoil, or in a few cases the downward thrust from jet engines.Although...
which results from an aileron
Aileron
Ailerons are hinged flight control surfaces attached to the trailing edge of the wing of a fixed-wing aircraft. The ailerons are used to control the aircraft in roll, which results in a change in heading due to the tilting of the lift vector...
deflection and a roll rate, such as when entering or exiting a turn. It is called "adverse" because it acts opposite to the yaw
Flight dynamics
Flight dynamics is the science of air vehicle orientation and control in three dimensions. The three critical flight dynamics parameters are the angles of rotation in three dimensions about the vehicle's center of mass, known as pitch, roll and yaw .Aerospace engineers develop control systems for...
moment needed to execute the desired turn. Adverse yaw has three mechanisms, listed below in decreasing order of importance. Assuming a roll rate to the right, as in the diagram below, these three mechanisms are explained as follows:

1) By definition, lift
Lift
Lift may mean:* Lift , a mechanical force generated by an object moving through a fluid* Lift , rising air used by soaring birds and glider, hang glider and paraglider pilots for soaring flight...
is perpendicular to the oncoming flow. Hence, as the left wing moves up, its lift vector tilts back; as the right wing descends, its lift vector tilts forward. The result is an adverse yaw moment to the left, opposite to the intended right turn.

2) The downward aileron deflection on the left increases the airfoil
Airfoil
An airfoil or aerofoil is the shape of a wing or blade or sail as seen in cross-section....
camber, which will typically increase the profile drag. Conversely, the upward aileron deflection on the right will decrease the camber and profile drag. The profile drag imbalance adds to the adverse yaw. The exception is on a Frise aileron, described father below. 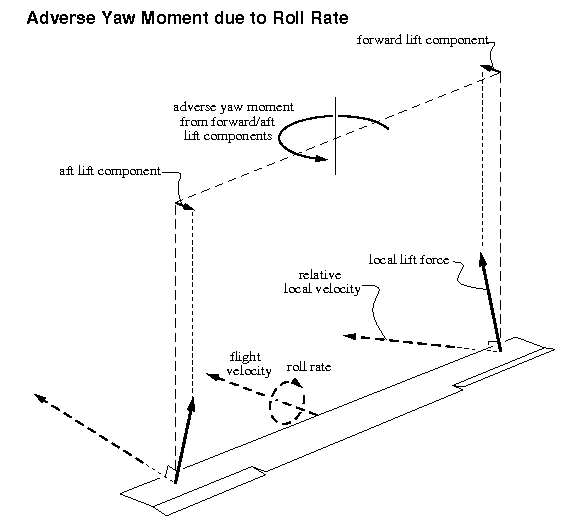 Adverse yaw is countered by using the aircraft's rudder
Rudder
A rudder is a device used to steer a ship, boat, submarine, hovercraft, aircraft or other conveyance that moves through a medium . On an aircraft the rudder is used primarily to counter adverse yaw and p-factor and is not the primary control used to turn the airplane...
to perform a coordinated turn
Coordinated flight
In aviation, coordinated flight of an aircraft is flight without sideslip.When an aircraft is flying with zero sideslip a turn and bank indicator installed on the aircraft’s instrument panel usually shows the ball in the center of the spirit level...
, however an aircraft designer can reduce the amount of correction required by careful design of the aircraft. Some methods are common: 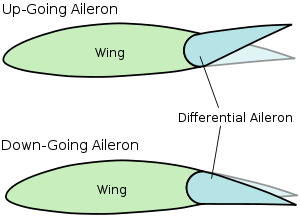 Because downwards deflection of an aileron typically causes more profile drag than an upwards deflection, a simple way of mitigating adverse yaw would be to rely solely on the upward deflection of the opposite aileron to cause the aircraft to roll. However, this would lead to a slow roll rate - and therefore a better solution is to make a compromise between adverse yaw and roll rate. This is what occurs in Differential ailerons.

As can be seen from the diagram, the down-going aileron moves through a smaller angle than the up-going aileron, reducing the amount of aileron drag, and thus reducing the effect of adverse yaw. The De Havilland Tiger Moth
De Havilland Tiger Moth
The de Havilland DH 82 Tiger Moth is a 1930s biplane designed by Geoffrey de Havilland and was operated by the Royal Air Force and others as a primary trainer. The Tiger Moth remained in service with the RAF until replaced by the de Havilland Chipmunk in 1952, when many of the surplus aircraft...
biplane
Biplane
A biplane is a fixed-wing aircraft with two superimposed main wings. The Wright brothers' Wright Flyer used a biplane design, as did most aircraft in the early years of aviation. While a biplane wing structure has a structural advantage, it produces more drag than a similar monoplane wing...
uses this method of roll control to avoid adverse yaw problems.

Frise ailerons are designed so that when up aileron is applied, some of the forward edge of the aileron will protrude downward into the airflow, causing increased drag on this (down-going) wing. This will counter the drag produced by the other aileron, thus reducing adverse yaw.

Unfortunately, as well as reducing adverse yaw, Frise ailerons will increase the overall drag of the aircraft much more than applying rudder correction. Therefore they are less popular in aircraft where minimizing drag is important (e.g. in a glider
Glider (sailplane)
A glider or sailplane is a type of glider aircraft used in the sport of gliding. Some gliders, known as motor gliders are used for gliding and soaring as well, but have engines which can, in some cases, be used for take-off or for extending a flight...
).

Note : Frise ailerons are primarily designed to reduce roll control forces. Contrary to the illustration, the aileron leading edge has to be rounded to prevent flow separation and flutter
Aeroelasticity
Aeroelasticity is the science which studies the interactions among inertial, elastic, and aerodynamic forces. It was defined by Arthur Collar in 1947 as "the study of the mutual interaction that takes place within the triangle of the inertial, elastic, and aerodynamic forces acting on structural...
at negative deflections. That prevents important differential drag forces.

On large aircraft where rudder use is inappropriate at high speeds or ailerons are too small at low speeds, roll spoilers can be used to minimize adverse yaw or increase roll moment. To function as a lateral control, the spoiler is raised on the down-going wing (up aileron) and remains retracted on the other wing. The raised spoiler increases the drag, and so the yaw is in the same direction as the roll.