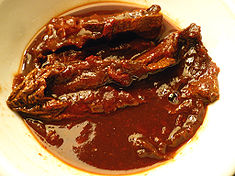 Adobo is the immersion of raw food into a preparation, in the form of a stock (or sauce), of different components, including paprika
Paprika
Paprika is a spice made from the grinding of dried fruits of Capsicum annuum . In many European languages, the word paprika refers to bell peppers themselves. The seasoning is used in many cuisines to add color and flavor to dishes. Paprika can range from mild to hot...
(from red peppers), oregano
Oregano
Oregano – scientifically named Origanum vulgare by Carolus Linnaeus – is a common species of Origanum, a genus of the mint family . It is native to warm-temperate western and southwestern Eurasia and the Mediterranean region.Oregano is a perennial herb, growing from 20–80 cm tall,...
, salt
Salt
In chemistry, salts are ionic compounds that result from the neutralization reaction of an acid and a base. They are composed of cations and anions so that the product is electrically neutral...
, garlic
Garlic
Allium sativum, commonly known as garlic, is a species in the onion genus, Allium. Its close relatives include the onion, shallot, leek, chive, and rakkyo. Dating back over 6,000 years, garlic is native to central Asia, and has long been a staple in the Mediterranean region, as well as a frequent...
, and vinegar
Vinegar
Vinegar is a liquid substance consisting mainly of acetic acid and water, the acetic acid being produced through the fermentation of ethanol by acetic acid bacteria. Commercial vinegar is produced either by fast or slow fermentation processes. Slow methods generally are used with traditional...
— mixed according to the place of origin and the food with which it is intended to be used—primarily to preserve and enhance the flavor of food. The cooking technique is native to Spanish cuisine
Spanish cuisine
Spanish cuisine consists of a variety of dishes, which stem from differences in geography, culture and climate. It is heavily influenced by seafood available from the waters that surround the country, and reflects the country's deep maritime roots...
, and, once becoming widely used in Latin America
Latin American cuisine
Latin American Cuisine refers to typical foods, beverages, and cooking styles common to many of the countries and cultures in Latin America...
, was subsequently adopted in other countries, such as the United States
Cuisine of the Southwestern United States
The Cuisine of the Southwestern United States is food styled after the rustic cooking of the Southwestern United States. It is also known to be very popular in the west coast state of California...
.

Alternatively, in Venezuela, adobo refers to a mixture of salt with various spices, technically known as sal condimentada (seasoned salt).

Adobo
Adobo (Filipino cuisine)
Adobo is the name of a popular dish and cooking process in Philippine cuisine that involves meat or seafood marinated in a sauce of vinegar and garlic, browned in oil, and simmered in the marinade....
is also the name given by Spanish colonists to an unrelated, but superficially similar, Philippine cooking process, which primarily uses vinegar.

In antiquity, meat and fish were difficult to conserve. Cold facilitated the conservation of food, but the weather often did not provide low temperatures ideal for preservation, so it was necessary to apply other techniques, such as adobo. Animals were usually slaughtered in the coldest months of winter, but surplus meat had to be preserved in the warmer months. This was facilitated through the use of adobos (marinades) along with paprika
Paprika
Paprika is a spice made from the grinding of dried fruits of Capsicum annuum . In many European languages, the word paprika refers to bell peppers themselves. The seasoning is used in many cuisines to add color and flavor to dishes. Paprika can range from mild to hot...
(a substance with antibacterial properties). Paprika gives a reddish color to adobos, but at the same time the capsaicin
Capsaicin
Capsaicin 2CHCH=CH4CONHCH2C6H3-4--3- ) is the active component of chili peppers, which are plants belonging to the genus Capsicum. It is an irritant for mammals, including humans, and produces a sensation of burning in any tissue with which it comes into contact...
s in paprika permit fats to dissolve to the point of allowing tissue penetration, going deeper than the surface.

Adobo was employed inititally as a method of food preservation, but in time—with the advent of refrigeration methods—it came to be used primarily as a method of flavoring foods before cooking. Traditional preparations were created with the intent of flavoring, such as cazón en adobo (dogfish in adobo, made from school shark
School shark
The school shark, tope shark, soupfin shark or snapper shark, Galeorhinus galeus, is a hound shark of the family Triakidae, the only member of the genus Galeorhinus, found worldwide in subtropical seas at depths of up to...
and originates from Cadiz
Cádiz
Cadiz is a city and port in southwestern Spain. It is the capital of the homonymous province, one of eight which make up the autonomous community of Andalusia....
, a city in the Cádiz province of Spain); berenjenas de Almagro (Almagro eggplant, a pickled eggplant characteristic of "Manchega" cuisine from the Castile-La Mancha
Castile-La Mancha
Castile-La Mancha is an autonomous community of Spain. Castile-La Mancha is bordered by Castile and León, Madrid, Aragon, Valencia, Murcia, Andalusia, and Extremadura. It is one of the most sparsely populated of Spain's autonomous communities...
region of Spain, specifically from Almagro
Almagro, Ciudad Real
Almagro is a city situated in Ciudad Real province, in the autonomous community of Castile-La Mancha, Spain.A tourist destination, Almagro is an important Historical-Artistic Zone ....
, a city in the Ciudad Real province of Spain); and lomo en adobo (tenderloin of beef or pork in adobo).

The noun form of adobo describes a marinade or seasoning mix. Recipes vary widely by region: Puerto Rican adobo, a rub used principally on meats, differs greatly from the Mexican variety. Meat marinated or seasoned with an adobo is referred to having been adobada or adobado.

Adobo relates to marinated dishes such as chipotles en adobo in which chipotle
Chipotle
A chipotle , or chilpotle, which comes from the Nahuatl word chilpoktli meaning "smoked chili pepper" is a smoke-dried jalapeño that tends to be brown and shriveled. It is a chili used primarily in Mexican and Mexican-inspired cuisines, such as Mexican-American and Tex-Mex.Varieties of jalapeño...
s (smoked ripe jalapeño peppers
Jalapeño
The jalapeño is a medium-sized chili pepper that has a warm, burning sensation when eaten. A mature jalapeño fruit is 2–3½ inches long and is commonly picked and consumed while still green, but occasionally it is allowed to fully ripen and turn crimson red...
) are stewed in a sauce with tomatoes, garlic, vinegar, salt, and spices. The spices vary, but generally include several types of peppers (in addition to the chipotle and most likely those on hand), ground cumin and dried oregano. Some recipes include orange juice and lemon or lime juices. They often include a pinch of brown sugar just to offset any bitter taste.

Puerto Rican-style adobo is a seasoned salt that is generously sprinkled or rubbed on meats and seafood prior to grilling, sauteing, or frying. Supermarkets sell prepared blends, such as that produced by Goya Foods
Goya Foods
Goya Foods, Inc. is the manufacturer or distributor of a brand of foods sold in the United States and many Latin American countries, with company headquarters in Secaucus, New Jersey....
. There are two types of adobo on the island. The wet rub, adobo mojado, consists of crushed garlic, olive oil, salt, black pepper, dry or fresh orégano brujo
Plectranthus amboinicus
Plectranthus amboinicus is a tender fleshy perennial plant in the family Lamiaceae with an oregano-like flavor and odor, native to Southern and Eastern Africa, but widely cultivated and naturalised in the Old and New World Tropics...
, citrus juice
Citrus
Citrus is a common term and genus of flowering plants in the rue family, Rutaceae. Citrus is believed to have originated in the part of Southeast Asia bordered by Northeastern India, Myanmar and the Yunnan province of China...
or vinegar
Vinegar
Vinegar is a liquid substance consisting mainly of acetic acid and water, the acetic acid being produced through the fermentation of ethanol by acetic acid bacteria. Commercial vinegar is produced either by fast or slow fermentation processes. Slow methods generally are used with traditional...
or a mix of both citrus and vinegar. More widely used on the island is a dry mix, adobo seco. It is easier to prepare and has a long shelf life. Adobo seco consists of garlic powder, onion powder, salt, black pepper, dry orégano brujo, and sometimes dried citrus zest
Zest (ingredient)
Zest is a food ingredient that is prepared by scraping or cutting from the outer, colorful skin of citrus fruits such as lemon, orange, citron, and lime. Zest is used to add flavor to foods....
.

In Filipino cuisine, adobo refers to a common cooking process indigenous to the Philippines. It should not be confused with the Spanish and Latin American adobo, as they have different origins and refer to different dishes despite sharing the same name. When the Spanish invaded the Philippines in the late 16th century, they encountered a cooking process that involved stewing with vinegar. The Spanish referred to this method as adobo due to its superficial similarity to the Spanish adobo. Nevertheless, the Filipino adobo is an entirely separate method of preparing food and is distinct from the Spanish marinade. There are many variations of adobo in the Philippines in which soy sauce is used like Adobong Baboy in which pork is used, Adobong Manok in which chicken is used, etc. There is also the Adobong Pusit, a squid based dish which uses the squids ink as the broth together with vinegar.