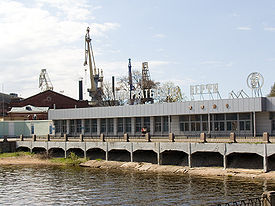 The Admiralty Shipyard (formerly Soviet Shipyard No. 194) is one of the oldest and largest shipyards in Russia
Russia
Russia or , officially known as both Russia and the Russian Federation , is a country in northern Eurasia. It is a federal semi-presidential republic, comprising 83 federal subjects...
, located in Saint Petersburg
Saint Petersburg
Saint Petersburg is a city and a federal subject of Russia located on the Neva River at the head of the Gulf of Finland on the Baltic Sea...
. The shipyard's building ways can accommodate ships of up to , 250 meters in length and 35 meters in width. Military products include naval warships such as nuclear and diesel-powered submarines and large auxiliaries
Auxiliaries
An auxiliary force is a group affiliated with, but not part of, a military or police organization. In some cases, auxiliaries are armed forces operating in the same manner as regular soldiers...
.

The shipyard was founded as the Galley Yard by Peter the Great during the Great Northern War
Great Northern War
The Great Northern War was a conflict in which a coalition led by the Tsardom of Russia successfully contested the supremacy of the Swedish Empire in northern Central Europe and Eastern Europe. The initial leaders of the anti-Swedish alliance were Peter I the Great of Russia, Frederick IV of...
in 1704 on 5 November 1704 and located in the open ground along the Neva River behind the Admiralty building. It was administered by the Russian Admiralty
Russian Admiralty
Admiralty Board was a supreme body for the administration of the Imperial Russian Navy in the Russian Empire, established by Peter the Great on December 12, 1718, and headquartered in the Admiralty building, Saint Petersburg....
, hence its later name. In 1721 it was renamed Galley Wharf and in 1800 the New Admiralty Yard, supplementing and in 1841 soon replacing the Galley Wharf. In 1908, it was renamed the Admiralty Shipyard. In 1937 its two sections were known as Admiralty and Sudomekh, Shipyards No. 194 and No. 196, respectively. In 1966 it once again became the New Admiralty Shipyard as in 1800 and, in 1972, the Leningrad Admiralty Association. The latest name changes occurred in 1992 - State Enterprise "Admiralty Wharves" - and in 2001 - Federal State Unitary Enterprise "Admiralty Wharves". Finally, in 2008, it became an open stock company - OAO "Admiralty Wharves".

From its founding through 1917 the shipyard built more than 1000 vessels and ships, including 137 large sail warships, about 700 medium and small sail and oared vessels, and more than 100 iron ships, including 25 armored warships and 8 cruisers. In 1959 it delivered the world's first non-naval nuclear-powered vessel, the icebreaker LENIN.

In the 19th century it was a major builder of battleships and submarines and cruisers in the 20th. Since the mid-1950s its surface-ship facilities have specialized in large merchant ships, icebreakers, large rescue and salvage ships, fish-factory ships, floating dry docks, and a few naval auxiliaries.

Examples of non-military production from the Admiralty Wharves abound in St. Petersburg, from the bronze tablets, candelabra, and angel of the Alexander Column in Palace Square, the statuary and roof of St. Isaac's Cathedral, a number of bridges over the canals, and most of the ornate cast iron fencing in old St. Petersburg. All were products of the shipyard's foundry.

A unique deep-sea research vehicle “Konsul” is the first Russian deep-diving vehicle of the third generation, capable of diving as deep as 6 kilometres (3.7 mi) and working for 10 hours using a manipulator as well as lifting to the surface a load of up to 200 kilograms (440.9 lb). The construction of underwater vessels constitutes 70% of the total production volume of the shipyard. Out of all submarines built in the world, 15% by tonnage are produced at the Admiralty Shipyards. http://mbsz.ru/04/29.php

Admiralty Shipyards in St. Petersburg will build six Kilo class diesel-electric submarines for delivery to Vietnam, the Russian business daily Kommersant said in April 2009.
The paper quoted company general director Vladimir Aleksandrov as saying that Russia's state arms exporter Rosoboronexport would soon sign a contract with a foreign state, and that Admiralty Shipyards had been chosen to fulfill this contract. Sources in Rosoboronexport later confirmed that Russia and Vietnam had been negotiating a $1.8 billion deal on the delivery of six Kilo-class submarines to the Vietnamese navy for about a year. Admiralty Shipyards is currently building two Kilo class submarines for Algeria to be delivered in 2009 and 2010.

In the 1990s, Admiralty Shipyard became a joint stock company
Joint stock company
A joint-stock company is a type of corporation or partnership involving two or more individuals that own shares of stock in the company...
and in 1997 it started construction of ice class
Ice class
Ships with an Ice Class have a strengthened hull to enable them to navigate through sea ice.-History:The first requirements for merchant ships to be escorted by icebreakers were set in Finland in 1890, after winter traffic to the port of Hanko was started. In the past, different classification...
tankers of , designed for simultaneous transportation of up to four different cargo grades. These tankers have been equipped with the latest automated ships systems of world class. The tanker has double hull
Double hull
A double hull is a ship hull design and construction method invented by Leonardo da Vinci where the bottom and sides of the ship have two complete layers of watertight hull surface: one outer layer forming the normal hull of the ship, and a second inner hull which is some distance inboard,...
and is able to run in solid-ice up to a half-meter thick at a speed of 1½–2 knots. During recent years the shipyard constructed five ships for Russia's largest oil company (Lukoil
LUKoil
Lukoil/LUKoil ; ) is Russia's second largest oil company and its second largest producer of oil. In 2009, the company produced 97.615 million tons of oil; ....
)—the Astrakhan, Magas, Kaliningrad, Saratov, Usinsk. All of which are working on the Northern Sea Route. 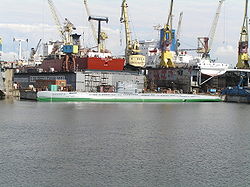 Military shipbuilding
Shipbuilding
Shipbuilding is the construction of ships and floating vessels. It normally takes place in a specialized facility known as a shipyard. Shipbuilders, also called shipwrights, follow a specialized occupation that traces its roots to before recorded history.Shipbuilding and ship repairs, both...
consists of orders from the Russian Ministry of Defense and export orders for foreign governments. The shipyard's military orders are primarily submarines, but also include non-military repair, modernization and building of other underwater technical innovations for oceanic development.

Currently the shipyard employs about 10,000 people under the general director Vladimir L. Aleksandrov.

New shipyards especially dedicated to the building of two Mistral class ships for the Russian navy will be set up on Kotlin Island, as part of a deal signed in December between France and Russia. They will be part of the Admiralty Shipyards company and could start building Mistral ships after 2014. They will be used later to construct commercial bulk ships and large combat ships.