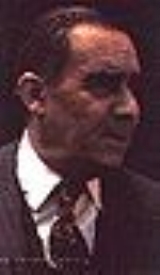 Encyclopedia
Adelino da Palma Carlos, GCC
Order of Christ (Portugal)
The Military Order of Christ previously the Royal Order of the Knights of Our Lord Jesus Christ was the heritage of the Knights Templar in Portugal, after the suppression of the Templars in 1312...
, GCIH, GOL
Order of Liberty
The Order of Liberty, or Freedom, is a Portuguese honorific civil order that distinguishes relevant services to the cause of democracy and freedom, in the defense of the values of civilization and human dignification...
(ɐdɨˈlinu dɐ ˈpaɫmɐ ˈkaɾluʃ; Faro
Faro, Portugal
Faro is the southernmost city in Portugal. It is located in the Faro Municipality in southern Portugal. The city proper has 41,934 inhabitants and the entire municipality has 58,305. It is the seat of the Faro District and capital of the Algarve region...
, 3 May 1905 – Lisbon
Lisbon
Lisbon is the capital city and largest city of Portugal with a population of 545,245 within its administrative limits on a land area of . The urban area of Lisbon extends beyond the administrative city limits with a population of 3 million on an area of , making it the 9th most populous urban...
, 27 October 1992), was a Portuguese
Portuguese people
The Portuguese are a nation and ethnic group native to the country of Portugal, in the west of the Iberian peninsula of south-west Europe. Their language is Portuguese, and Roman Catholicism is the predominant religion....
lawyer
Lawyer
A lawyer, according to Black's Law Dictionary, is "a person learned in the law; as an attorney, counsel or solicitor; a person who is practicing law." Law is the system of rules of conduct established by the sovereign government of a society to correct wrongs, maintain the stability of political...
, scholar, politician
Politician
A politician, political leader, or political figure is an individual who is involved in influencing public policy and decision making...
and a freemason, one of at least five sons of Manuel Carlos and wife Auta Vaz Velho da Palma. He was an opponent of the fascist regime of the Estado Novo (New State) of António de Oliveira Salazar
António de Oliveira Salazar
António de Oliveira Salazar, GColIH, GCTE, GCSE served as the Prime Minister of Portugal from 1932 to 1968. He also served as acting President of the Republic briefly in 1951. He founded and led the Estado Novo , the authoritarian, right-wing government that presided over and controlled Portugal...
(and later Marcelo Caetano
Marcelo Caetano
Marcelo José das Neves Alves Caetano, GCTE, GCC, also spelled Marcello Caetano , was a Portuguese politician and scholar, who was the last prime minister of the Estado Novo regime, from 1968 until his overthrow in the Carnation Revolution of 1974....
) since his youth, and, being a liberal
Liberalism
Liberalism is the belief in the importance of liberty and equal rights. Liberals espouse a wide array of views depending on their understanding of these principles, but generally, liberals support ideas such as constitutionalism, liberal democracy, free and fair elections, human rights,...
, rather than a socialist, was chosen by President António de Spínola
António de Spínola
António Sebastião Ribeiro de Spínola , GCTE, ComA was a Portuguese soldier, conservative politician and author, who was important in the transition to democracy following the Portuguese Carnation...
, as the 103rd and the first prime-minister after the April 25, 1974 revolution
Carnation Revolution
The Carnation Revolution , also referred to as the 25 de Abril , was a military coup started on 25 April 1974, in Lisbon, Portugal, coupled with an unanticipated and extensive campaign of civil resistance...
. He was also the 11th Bastonary of the Order of the Lawyers of Portugal.

His 1st Provisional Government was in power from 15 May to 17 July 1974. As an independent, he chose cabinet members from widely divergent political parties and positions, including members of the then center-left Popular Democratic Party
Partido Social Democrata
Partido Social Democrata may refer to:* Social Democratic Party * Social Democratic Party...
, the Socialist Party
Partido Socialista
Partido Socialista is Spanish and Portuguese for "Socialist Party". Used as a proper noun without any other adjectives, it may refer to:* Socialist Party * Socialist Party ** Socialist Party * Socialist Party of Chile...
and even the Portuguese Communist Party
Portuguese Communist Party
The Portuguese Communist Party is a major left-wing political party in Portugal. It is a Marxist-Leninist party, and its organization is based upon democratic centralism. The party also considers itself to be patriotic and internationalist....
and the Armed Forces Movement (MFA) officers. The ideological diversity of the government seems to be one of the main reasons why the government didn't last, being the other the calling for anticipated presidential elections before Constituent Assembly election, 1975. He was replaced by Colonel Vasco Gonçalves
Vasco Gonçalves
General Vasco dos Santos Gonçalves was a Portuguese army officer in the Engineering Corps who took part in the Carnation Revolution and later served as the 104th Prime Minister from 18 July 1974 to 19 September 1975....
, a choice that Spínola would latter regret. After leaving office, Palma Carlos was never involved in politics again.

He was married to Elina Júlia Chaves Pereira Guimarães (Lisbon
Lisbon
Lisbon is the capital city and largest city of Portugal with a population of 545,245 within its administrative limits on a land area of . The urban area of Lisbon extends beyond the administrative city limits with a population of 3 million on an area of , making it the 9th most populous urban...
, 1904 - 1991).
The source of this article is wikipedia, the free encyclopedia.  The text of this article is licensed under the GFDL.