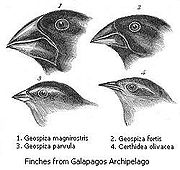 In evolutionary biology, adaptive radiation is the evolution
Evolution
Evolution is any change across successive generations in the heritable characteristics of biological populations. Evolutionary processes give rise to diversity at every level of biological organisation, including species, individual organisms and molecules such as DNA and proteins.Life on Earth...
of ecological
Ecology
Ecology is the scientific study of the relations that living organisms have with respect to each other and their natural environment. Variables of interest to ecologists include the composition, distribution, amount , number, and changing states of organisms within and among ecosystems...
and phenotypic diversity within a rapidly multiplying lineage
Lineage (evolution)
An evolutionary lineage is a sequence of species, that form a line of descent, each new species the direct result of speciation from an immediate ancestral species. Lineages are subsets of the evolutionary tree of life. Lineages are often determined by the techniques of molecular systematics.-...
. Starting with a recent single ancestor, this process results in the speciation
Speciation
Speciation is the evolutionary process by which new biological species arise. The biologist Orator F. Cook seems to have been the first to coin the term 'speciation' for the splitting of lineages or 'cladogenesis,' as opposed to 'anagenesis' or 'phyletic evolution' occurring within lineages...
and phenotypic adaptation of an array of species exhibiting different morphological and physiological traits with which they can exploit a range of divergent environments.
Adaptive radiation, a characteristic example of cladogenesis
Cladogenesis
Cladogenesis is an evolutionary splitting event in a species in which each branch and its smaller branches forms a "clade", an evolutionary mechanism and a process of adaptive evolution that leads to the development of a greater variety of sister species...
, can be graphically illustrated as a "bush", or clade
Clade
A clade is a group consisting of a species and all its descendants. In the terms of biological systematics, a clade is a single "branch" on the "tree of life". The idea that such a "natural group" of organisms should be grouped together and given a taxonomic name is central to biological...
, of coexisting species (on the tree of life).

Four features can be used to identify an adaptive radiation:

The evolution of a novel feature may permit a clade to diversify by making new areas of morphospace accessible. A classic example is the evolution of a fourth cusp in the mammalian tooth. This trait permits a vast increase in the range of foodstuffs which can be fed on. Evolution of this character has thus increased the number of ecological niche
Ecological niche
In ecology, a niche is a term describing the relational position of a species or population in its ecosystem to each other; e.g. a dolphin could potentially be in another ecological niche from one that travels in a different pod if the members of these pods utilize significantly different food...
s available to mammals. The trait arose a number of times in different groups during the Cenozoic
Cenozoic
The Cenozoic era is the current and most recent of the three Phanerozoic geological eras and covers the period from 65.5 mya to the present. The era began in the wake of the Cretaceous–Tertiary extinction event at the end of the Cretaceous that saw the demise of the last non-avian dinosaurs and...
, and in each instance was immediately followed by an adaptive radiation. Birds find other ways to provide for each other, i.e. the evolution of flight opened new avenues for evolution to explore, initiating an adaptive radiation.
Other examples include placental gestation (for eutheria
Eutheria
Eutheria is a group of mammals consisting of placental mammals plus all extinct mammals that are more closely related to living placentals than to living marsupials . They are distinguished from noneutherians by various features of the feet, ankles, jaws and teeth...
n mammals), or bipedal locomotion (in hominins).

Adaptive radiations often occur as a result of an organism arising in an environment with unoccupied niches, such as a newly formed lake or isolated island chain. The colonizing population may diversify rapidly to take advantage of all possible niches.

In Lake Victoria
Lake Victoria
Lake Victoria is one of the African Great Lakes. The lake was named for Queen Victoria of the United Kingdom, by John Hanning Speke, the first European to discover this lake....
, an isolated lake which formed recently in the African rift valley, over 300 species of cichlid
Cichlid
Cichlids are fishes from the family Cichlidae in the order Perciformes. Cichlids are members of a group known as the Labroidei along with the wrasses , damselfish , and surfperches . This family is both large and diverse. At least 1,300 species have been scientifically described, making it one of...
fish adaptively radiated from one parent species in just 15,000 years.

Adaptive radiations commonly follow mass extinctions: following an extinction, many niches are left vacant. A classic example of this is the replacement of the non-avian dinosaurs with mammals at the end of the Cretaceous, and of brachiopod
Brachiopod
Brachiopods are a phylum of marine animals that have hard "valves" on the upper and lower surfaces, unlike the left and right arrangement in bivalve molluscs. Brachiopod valves are hinged at the rear end, while the front can be opened for feeding or closed for protection...
s by bivalves at the Permo-Triassic boundary.