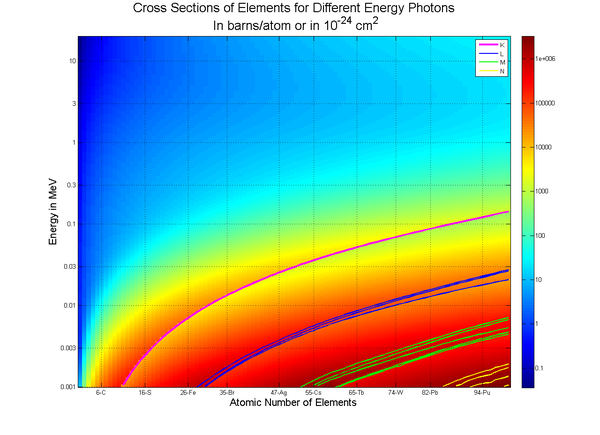 Absorption cross section is a measure for the probability of an absorption process. More generally, the term cross section
Cross section (physics)
A cross section is the effective area which governs the probability of some scattering or absorption event. Together with particle density and path length, it can be used to predict the total scattering probability via the Beer-Lambert law....
is used in physics to quantify the probability of a certain particle-particle interaction, e.g., scattering
Scattering
Scattering is a general physical process where some forms of radiation, such as light, sound, or moving particles, are forced to deviate from a straight trajectory by one or more localized non-uniformities in the medium through which they pass. In conventional use, this also includes deviation of...
, electromagnetic absorption
Absorption (electromagnetic radiation)
In physics, absorption of electromagnetic radiation is the way by which the energy of a photon is taken up by matter, typically the electrons of an atom. Thus, the electromagnetic energy is transformed to other forms of energy for example, to heat. The absorption of light during wave propagation is...
, etc. (Note that light in this context is described as consisting of particle
Elementary particle
In particle physics, an elementary particle or fundamental particle is a particle not known to have substructure; that is, it is not known to be made up of smaller particles. If an elementary particle truly has no substructure, then it is one of the basic building blocks of the universe from which...
s, i.e., photon
Photon
In physics, a photon is an elementary particle, the quantum of the electromagnetic interaction and the basic unit of light and all other forms of electromagnetic radiation. It is also the force carrier for the electromagnetic force...
s.)

In the context of ozone
Ozone
Ozone , or trioxygen, is a triatomic molecule, consisting of three oxygen atoms. It is an allotrope of oxygen that is much less stable than the diatomic allotrope...
shielding of ultraviolet light, absorption cross section is the ability of a molecule
Molecule
A molecule is an electrically neutral group of at least two atoms held together by covalent chemical bonds. Molecules are distinguished from ions by their electrical charge...
to absorb a photon of a particular wavelength
Wavelength
In physics, the wavelength of a sinusoidal wave is the spatial period of the wave—the distance over which the wave's shape repeats.It is usually determined by considering the distance between consecutive corresponding points of the same phase, such as crests, troughs, or zero crossings, and is a...
and polarization. Analogously, in the context of nuclear engineering
Nuclear engineering
Nuclear engineering is the branch of engineering concerned with the application of the breakdown as well as the fusion of atomic nuclei and/or the application of other sub-atomic physics, based on the principles of nuclear physics...
it refers to the probability of a particle (usually a neutron
Neutron
The neutron is a subatomic hadron particle which has the symbol or , no net electric charge and a mass slightly larger than that of a proton. With the exception of hydrogen, nuclei of atoms consist of protons and neutrons, which are therefore collectively referred to as nucleons. The number of...
) being absorbed by a nucleus. Although the units are given as an area, it does not refer to an actual size area, at least partially because the density
Density
The mass density or density of a material is defined as its mass per unit volume. The symbol most often used for density is ρ . In some cases , density is also defined as its weight per unit volume; although, this quantity is more properly called specific weight...
or state of the target molecule will affect the probability
Probability
Probability is ordinarily used to describe an attitude of mind towards some proposition of whose truth we arenot certain. The proposition of interest is usually of the form "Will a specific event occur?" The attitude of mind is of the form "How certain are we that the event will occur?" The...
of absorption. Quantitatively, the number dN of photons absorbed, between the points x and x + dx along the path of a beam is the product of the number N of photons penetrating to depth x times the number n of absorbing molecules per unit volume times the absorption cross section σ:

where:
This is also commonly expressed as: