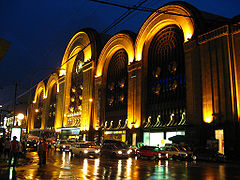 The Abasto de Buenos Aires was the central wholesale fruit and vegetable market in Buenos Aires
Buenos Aires
Buenos Aires is the capital and largest city of Argentina, and the second-largest metropolitan area in South America, after São Paulo. It is located on the western shore of the estuary of the Río de la Plata, on the southeastern coast of the South American continent...
, Argentina
Argentina
Argentina , officially the Argentine Republic , is the second largest country in South America by land area, after Brazil. It is constituted as a federation of 23 provinces and an autonomous city, Buenos Aires...
, from 1893 to 1984. Since 1999, it has served as a shopping mall, Abasto Shopping. It is also famous for being in the area where the tango singer Carlos Gardel
Carlos Gardel
Carlos Gardel was a singer, songwriter and actor, and is perhaps the most prominent figure in the history of tango. He was born in Toulouse, France, although he never acknowledged his birthplace publicly, and there are still claims of his birth in Uruguay. He lived in Argentina from the age of two...
, known as El Morocho del Abasto ("the dark-haired guy from Abasto"), lived for most of his life. Today, the surrounding area, though part of the Balvanera
Balvanera
Balvanera is a neighborhood of Buenos Aires, Argentina.-Origin of Name and Alternative Names:The official name, Balvanera, is the name of the parroquia centered around the church of Nuestra Señora de Balvanera, erected in 1831.The zone around Corrientes avenue is known as Once after Plaza Once de...
neighbourhood, is sometimes referred to as Abasto.

The Abasto Shopping centre is served by the adjoining underground station Carlos Gardel of line B
Line B (Buenos Aires)
Line B of the Buenos Aires Metro runs from Leandro N. Alem to Los Incas/Parque Chas . Line B opened to the public on 17 October 1930....
metro (subte).

By the end of the 19th century, the city of Buenos Aires was expanding rapidly due to the influx of migrants from various Europe
Europe
Europe is, by convention, one of the world's seven continents. Comprising the westernmost peninsula of Eurasia, Europe is generally 'divided' from Asia to its east by the watershed divides of the Ural and Caucasus Mountains, the Ural River, the Caspian and Black Seas, and the waterways connecting...
an countries. Because of the demographic change, and the demolition of the Mercado Modelo market near the Plaza Lorea, the Devoto brothers on August 16, 1888, proposed the construction of a supply market on the land they acquired in 1875 in the Balvanera
Balvanera
Balvanera is a neighborhood of Buenos Aires, Argentina.-Origin of Name and Alternative Names:The official name, Balvanera, is the name of the parroquia centered around the church of Nuestra Señora de Balvanera, erected in 1831.The zone around Corrientes avenue is known as Once after Plaza Once de...
neighbourhood. The land was near the Sarmiento railway
Ferrocarril Domingo Faustino Sarmiento
The Ferrocarril Domingo Faustino Sarmiento , named after the former Argentine president, statesman, educator, and author Domingo Faustino Sarmiento, was one of the six state-owned Argentine railway companies formed after President Juan Perón's nationalisation of the Argentine railway network in 1948...
and halfway between La Boca
La Boca
La Boca is a neighborhood, or barrio of the Argentine capital, Buenos Aires. It retains a strong European flavour, with many of its early settlers being from the Italian city of Genoa. In fact the name has a strong assonance with the Genoese neighborhood of Boccadasse , and some people believe that...
and Olivos
Olivos, Buenos Aires
Olivos is an Argentine city in Vicente López Partido in the Province of Buenos Aires and a suburb within the Greater Buenos Aires metro area....
, two zones of fruit and vegetable production.

The town hall accepted the proposal on November 29 of that year, and passed it on to the Deliberating Council, who sanctioned it on January 8, 1889, in an ordinance approving the construction of the Mercado Central de Abasto ("Central Supply Market") on the 25,000 m² plot of land between Corrientes Avenue
Corrientes Avenue
Avenida Corrientes is one of the principal thoroughfares of the Argentine capital of Buenos Aires. The street is intimately tied to the tango and the porteño sense of identity...
, Lavalle, Anchorena and Laprida streets. The municipality allowed the Abasto market to become wholesalers of fruit, vegetables and other foodstuffs, but forbade the sale of meat.

The old marketeers of the Mercado Modelo associated and founded in 1889 the Sociedad Anónima Mercado de Abasto Proveedor ("Market Supply Provider Anonymous Society"), which bought from the Devoto brothers the land and the concession to build the Mercado de Abasto. The construction of the building started shortly after the sale had been approved by mayor Francisco Seeber
Francisco Seeber
Francisco Seeber was an Argentine military officer, businessman and Mayor of Buenos Aires.-Life and times:...
, and the first section was inaugurated on April 1 of 1893, with a covered area of 1,300 m².

Ten years later a refrigerated storage and an ice factory were opened, to satisfy the city's hygiene standards of the times. Since the population, and with it consumer demand, was steadily growing, it was necessary to construct a parking area for horses and vehicles. In 1928 an annex for retail sale was built between Guardia Vieja, Lavalle, Gallo and Bustamante streets.

Consumer demand again led to the overcrowding of the markets of the city, so architects José Luis Delpini, Viktor Sulčič
Viktor Sulcic
Viktor Sulčič, also known as Víctor Sulcic, was a Slovenian born architect in Argentina. He was born in 1895 in Križ near Trieste, died in 1973 in Buenos Aires....
and Raúl Bes designed a new market in the location of the Abasto market. Work started on December 28 of 1931 with the foundations and finished in 1934. The new Mercado de Abastos had an area of 44000 m² (473,612 sq ft), railway access and underground parking. In 1939, the sale of meat and fish was allowed.

On October 14, 1984 the central market was moved to the present Mercado Central, location, outside the city of Buenos Aires, and the Abasto of Buenos Aires was closed and left abandoned. It was not until the mid-1990s that a project was proposed for turning the Abasto into a shopping mall. In 1996 the building was sold to IRSA, which restored the facade and remodeled and restored its interior. Abasto Shopping Centre was opened in 1999, and houses brands like Lacoste, Adidas
Adidas
Adidas AG is a German sports apparel manufacturer and parent company of the Adidas Group, which consists of the Reebok sportswear company, TaylorMade-Adidas golf company , and Rockport...
, Nike
Nike, Inc.
Nike, Inc. is a major publicly traded sportswear and equipment supplier based in the United States. The company is headquartered near Beaverton, Oregon, which is part of the Portland metropolitan area...
, Yves Saint Laurent
Yves Saint Laurent (brand)
Yves Saint Laurent or YSL is a luxury fashion house founded by Yves Saint Laurent and his partner, Pierre Bergé. Today, its chief designer is Stefano Pilati. Yves Saint Laurent, founder of the brand, died in 2008.-History:...
, Christian Dior
Christian Dior
Christian Dior , was a French fashion designer, best known as the founder of one of the world's top fashion houses, also called Christian Dior.-Life:...
, New Man
New Man
New Man was a prominent American Christian lifestyle men's magazine, founded in 1994, and becoming an online publication in 2008. Its stated purpose is "Helping men to develop Christ-centered perspectives that will transform their lives, their families and their worlds."...
, among others.