Encyclopedia
The AG36 is a single-shot 40 mm grenade launcher
Grenade launcher
A grenade launcher or grenade discharger is a weapon that launches a grenade with more accuracy, higher velocity, and to greater distances than a soldier could throw it by hand....
which operates on the High-Low System
High-Low System
The High-Low system also referred to as the "High-Low Pressure system", the "High-Low Propulsion System", and the "High-Low projection system", is a design of cannon and antitank launcher using a smaller high-pressure chamber for storing the propellant...
and was designed primarily for installation on the G36
Heckler & Koch G36
The Heckler & Koch G36 is a 5.56×45mm assault rifle, designed in the early 1990s by Heckler & Koch in Germany as a replacement for the 7.62mm G3 battle rifle. It was accepted into service with the Bundeswehr in 1997, replacing the G3...
assault rifle
Assault rifle
An assault rifle is a selective fire rifle that uses an intermediate cartridge and a detachable magazine. Assault rifles are the standard infantry weapons in most modern armies...
, designed by the German
Germany
Germany , officially the Federal Republic of Germany , is a federal parliamentary republic in Europe. The country consists of 16 states while the capital and largest city is Berlin. Germany covers an area of 357,021 km2 and has a largely temperate seasonal climate...
weapons manufacturing company Heckler & Koch
Heckler & Koch
Heckler & Koch GmbH is a German defense manufacturing company that produces various small arms. Some of their products include the SA80, MP5 submachine gun, G3 automatic rifle, the G36 assault rifle, the HK 416, the MP7 personal defense weapon, the USP series of handguns, and the high-precision...
of Oberndorf am Neckar
Oberndorf am Neckar
Oberndorf am Neckar is a town in the district of Rottweil, in Baden-Württemberg, Germany. It is situated on the river Neckar, 15 km north of Rottweil.-Geography:...
. It originally appeared as Heckler & Koch's candidate for the US Army's Enhanced Grenade Launcher requirement, evaluated for use with the XM8
XM8 rifle
The XM8 was a developmental U.S. Military designation and project name for a lightweight assault rifle system that was under development by the United States Army from the late 1990s to early 2000s...
and FN SCAR
FN SCAR
The Special Operations Forces Combat Assault Rifle, or SCAR, is a modular rifle made by FN Herstal for the United States Special Operations Command to satisfy the requirements of the SCAR competition. This family of rifles consist of two main types...
rifles. As is commonly mistaken, the "A" is not an addition to the name "G36" which is short for Gewehr 36 but is in fact an abbreviation of the German
German language
German is a West Germanic language, related to and classified alongside English and Dutch. With an estimated 90 – 98 million native speakers, German is one of the world's major languages and is the most widely-spoken first language in the European Union....
Anbaugranatwerfer, literally meaning "attached grenade launcher" and the 36 coming from the name of the primary weapon it was designed to enhance – the G36. It can also be used dismounted, with a stock attached as a stand alone model, or a LLM01
LLM01
The LLM01 is an adaptive target acquisition module made by Oerlikon Contraves GmbH in Stockach, Germany. It is designed to be mounted with a metal integral quick release clamping adapter on the left side of the carry handle adapter of Heckler & Koch G36 assault rifles...
laser light module can be attached to it.

As in many modern weapon systems including the G36
Heckler & Koch G36
The Heckler & Koch G36 is a 5.56×45mm assault rifle, designed in the early 1990s by Heckler & Koch in Germany as a replacement for the 7.62mm G3 battle rifle. It was accepted into service with the Bundeswehr in 1997, replacing the G3...
series, extensive use of polymer
Polymer
A polymer is a large molecule composed of repeating structural units. These subunits are typically connected by covalent chemical bonds...
s and high-strength aluminium
Aluminium
Aluminium or aluminum is a silvery white member of the boron group of chemical elements. It has the symbol Al, and its atomic number is 13. It is not soluble in water under normal circumstances....
in the AG36 launcher contributes to its low mass and durability. It is capable of firing almost all 40x46mm
40 mm grenade
The 40mm grenade is a military grenade caliber for grenade launchers in service with many armed forces. There are two main types in service: the 40×46mm, which is a low-velocity round used in hand-held grenade launchers; and the high-velocity 40×53mm, used in mounted and crew-served weapons. The...
grenade rounds
Cartridge (firearms)
A cartridge, also called a round, packages the bullet, gunpowder and primer into a single metallic case precisely made to fit the firing chamber of a firearm. The primer is a small charge of impact-sensitive chemical that may be located at the center of the case head or at its rim . Electrically...
, including plastic training cartridges, flexible baton round
Flexible baton round
A bean bag round, also known by its trademarked name flexible baton round, is a baton round fired as a shotgun shell used for less lethal apprehension of suspects.-Description:...
s, CS gas
CS gas
2-chlorobenzalmalononitrile is the defining component of a "tear gas" commonly referred to as CS gas, which is used as a riot control agent...
, and OC
OC
-Language and country:* Root of the name for the Occitan language or for its territory, Occitania.-People:* O.C. , an American rapper* the Officer Commanding a military unit* Officer Candidate in the United States Navy's STA-21 program...
(oleoresin capsicum, the same chemical used in pepper spray
Pepper spray
Pepper spray, also known as OC spray , OC gas, and capsicum spray, is a lachrymatory agent that is used in riot control, crowd control and personal self-defense, including defense against dogs and bears...
) gas cartridges, white phosphorus
White phosphorus (weapon)
White phosphorus is a material made from a common allotrope of the chemical element phosphorus that is used in smoke, tracer, illumination and incendiary munitions. Other common names include WP, and the slang term "Willie Pete," which is dated from its use in Vietnam, and is still sometimes used...
, and HE ammunition. Once attached, the AG36 does not affect the accuracy of the rifle or its handling and operating functions. The AG36 is a part of Germany's Infantryman of the future
IdZ
Infanterist der Zukunft is the German Bundeswehr's program as part of the Future Soldier project. It is a modular, integrated fighting system designed to provide significant lethality, survivability, mobility, battle command, and training to the German infantryman...
program.

The AG36 is a single-shot weapon with a break-action steel
Steel
Steel is an alloy that consists mostly of iron and has a carbon content between 0.2% and 2.1% by weight, depending on the grade. Carbon is the most common alloying material for iron, but various other alloying elements are used, such as manganese, chromium, vanadium, and tungsten...
barrel and unlike its American
United States
The United States of America is a federal constitutional republic comprising fifty states and a federal district...
counterpart, the M203
M203 grenade launcher
The M203 is a single shot 40 mm grenade launcher designed to attach to a rifle. It uses the same rounds as the older M79 break-action grenade launcher, which utilize the High-Low Propulsion System to keep recoil forces low. Though versatile, and compatible with many rifle models, the M203 was...
, the AG36 swings out laterally for loading, allowing for the use of longer rounds when necessary, e.g. baton or flare rounds. When open, the breech is on the left. For installation the rifle's existing barrel handguard is removed and replaced by the AG36. The weapon has a trigger group with a manual safety lever and a pistol grip for ease of handling. Aiming is accomplished using standard ladder sights, which are located on the left side of the launcher body and folded down when not in use.

Due to its modular design, the launcher can be readily adapted to other rifles such as the M16
M16 rifle
The M16 is the United States military designation for the AR-15 rifle adapted for both semi-automatic and full-automatic fire. Colt purchased the rights to the AR-15 from ArmaLite, and currently uses that designation only for semi-automatic versions of the rifle. The M16 fires the 5.56×45mm NATO...
-series and the Diemaco C7 and C8.

The L17A1 and L123A2 UGL (Under-slung Grenade Launcher) are the under-barrel 40 mm grenade launchers used by the British Army
British Army
The British Army is the land warfare branch of Her Majesty's Armed Forces in the United Kingdom. It came into being with the unification of the Kingdom of England and Scotland into the Kingdom of Great Britain in 1707. The new British Army incorporated Regiments that had already existed in England...
in conjunction with the L85A2
SA80
The SA80 is a British family of 5.56mm small arms. It is a selective fire, gas-operated assault rifle. SA80 prototypes were trialled in 1976 and production was completed in 1994....
rifle (L123A2 UGL), and in small numbers with the L119A1 carbine
Carbine
A carbine , from French carabine, is a longarm similar to but shorter than a rifle or musket. Many carbines are shortened versions of full rifles, firing the same ammunition at a lower velocity due to a shorter barrel length....
used by United Kingdom Special Forces
United Kingdom Special Forces
The United Kingdom Special Forces is a UK Ministry of Defence Directorate which also has the capability to provide a Joint Special Operations Task Force Headquarters...
and the Pathfinder Platoon (L17A1 UGL). It is designed and built by Heckler & Koch and is a modified variant of the AG36. The UGL was first deployed during Operation Telic
Operation Telic
Operation TELIC was the codename under which all British military operations in Iraq were conducted between the start of the Invasion of Iraq on 19 March 2003 and the withdrawal of the last remaining British forces on 22 May 2011...
in 2003. The UGL replaced the muzzle-launched Rifle Grenade General Service
Rifle Grenade General Service
The Rifle Grenade General Service was a rifle grenade in service with the British Army since 1996.The grenade is of the bullet-trap type and is launched from the muzzle of the L85A2 rifle using standard ball ammunition...
. One UGL is issued per fireteam
Fireteam
A fireteam is a small military unit of infantry. It is the smallest unit in the militaries that use it and is the primary unit upon which infantry organization is based in the British Army, Royal Air Force Regiment, Royal Marines, United States Army, United States Marine Corps, United States Air...
within infantry
Infantry
Infantrymen are soldiers who are specifically trained for the role of fighting on foot to engage the enemy face to face and have historically borne the brunt of the casualties of combat in wars. As the oldest branch of combat arms, they are the backbone of armies...
battalion
Battalion
A battalion is a military unit of around 300–1,200 soldiers usually consisting of between two and seven companies and typically commanded by either a Lieutenant Colonel or a Colonel...
s.

A further version of the AG36 is the Heckler & Koch AG-C/EGLM. 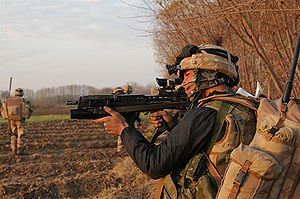 Replacing the Heckler & Koch HK69A1
Heckler & Koch HK69A1
The HK69A1 is a 40 mm grenade launcher developed and produced by the German arms manufacturer Heckler & Koch . The weapon was designed to engage enemy troops and strongpoints out to a distance of 350 m; it can also be used to deploy smoke grenades and illumination flares.-Development:The launcher’s...
.: Lithuanian Armed Forces.:: Designated L123A2 and used in conjunction with the L85A2
SA80
The SA80 is a British family of 5.56mm small arms. It is a selective fire, gas-operated assault rifle. SA80 prototypes were trialled in 1976 and production was completed in 1994....
rifle.