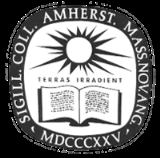 Overview
Amherst College is a private
Private university
Private universities are universities not operated by governments, although many receive public subsidies, especially in the form of tax breaks and public student loans and grants. Depending on their location, private universities may be subject to government regulation. Private universities are...
liberal arts college
Liberal arts colleges in the United States
Liberal arts colleges in the United States are certain undergraduate institutions of higher education in the United States. The Encyclopædia Britannica Concise offers a definition of the liberal arts as a "college or university curriculum aimed at imparting general knowledge and developing general...
located in Amherst
Amherst, Massachusetts
Amherst is a town in Hampshire County, Massachusetts, United States in the Connecticut River valley. As of the 2010 census, the population was 37,819, making it the largest community in Hampshire County . The town is home to Amherst College, Hampshire College, and the University of Massachusetts...
, Massachusetts
Massachusetts
The Commonwealth of Massachusetts is a state in the New England region of the northeastern United States of America. It is bordered by Rhode Island and Connecticut to the south, New York to the west, and Vermont and New Hampshire to the north; at its east lies the Atlantic Ocean. As of the 2010...
, United States. Amherst is an exclusively undergraduate four-year institution and enrolled 1,744 students in the fall of 2009. Students choose courses from 35 major programs in an unusually open curriculum.

Founded in 1821 as an attempt to relocate Williams College
Williams College
Williams College is a private liberal arts college located in Williamstown, Massachusetts, United States. It was established in 1793 with funds from the estate of Ephraim Williams. Originally a men's college, Williams became co-educational in 1970. Fraternities were also phased out during this...
by its President Zephaniah Swift Moore
Zephaniah Swift Moore
Zephaniah Swift Moore was an American Congregational clergyman and educator. He taught at Dartmouth College during the early 1810s and had a house built in Hanover, New Hampshire that now serves as Dartmouth's Blunt Alumni Center...
, Amherst is the third oldest institution of higher education in Massachusetts.

Is there anyone at Amherst that oversees archives? I would like to find out more details about the " Porter Prize" given in September 1877 to James F...
More
x