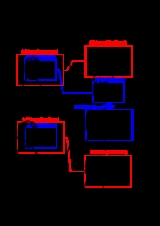 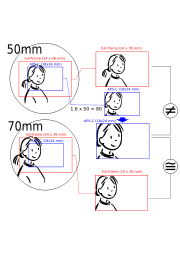 In photography
Photography
Photography is the art, science and practice of creating durable images by recording light or other electromagnetic radiation, either electronically by means of an image sensor or chemically by means of a light-sensitive material such as photographic film...
, the 35 mm equivalent focal length is a measure that indicates the angle of view
Angle of view
In photography, angle of view describes the angular extent of a given scene that is imaged by a camera. It is used interchangeably with the more general term field of view....
of a particular combination of a camera
Still camera
A still camera is a type of camera used to take photographs. Traditional cameras capture light onto photographic film. Digital cameras use electronics, usually a charge coupled device to store digital images in computer memory inside the camera...
lens
Photographic lens
A camera lens is an optical lens or assembly of lenses used in conjunction with a camera body and mechanism to make images of objects either on photographic film or on other media capable of storing an image chemically or electronically.While in principle a simple convex lens will suffice, in...
and film or sensor size
Image sensor format
In digital photography, the image sensor format is the shape and size of the image sensor.The image sensor format of a digital camera determines the angle of view of a particular lens when used with a particular camera...
. The term is useful because most photographers experienced with interchangeable lenses are most familiar with the 35 mm film
135 film
The term 135 was introduced by Kodak in 1934 as a designation for cartridge film wide, specifically for still photography. It quickly grew in popularity, surpassing 120 film by the late 1960s to become the most popular photographic film format...
format.

On any 35 mm film camera, a 28 mm lens is a wide-angle lens
Wide-angle lens
From a design perspective, a wide angle lens is one that projects a substantially larger image circle than would be typical for a standard design lens of the same focal length; this enables either large tilt & shift movements with a view camera, or lenses with wide fields of view.More informally,...
, and a 200 mm lens is a long-focus lens
Long-focus lens
In photography, a long-focus lens is a camera lens which has a focal length that is longer than the diagonal measure of the film or sensor that receives its image....
. However, now that digital cameras have mostly replaced 35 mm cameras, there is no uniform relation between the focal length
Focal length
The focal length of an optical system is a measure of how strongly the system converges or diverges light. For an optical system in air, it is the distance over which initially collimated rays are brought to a focus...
of a lens and the angle of view, since the size of the camera sensor also determines angle of view, and sensor size is not standardized as film size was. The 35 mm equivalent focal length of a particular lens–sensor combination is the focal length that one would need for a 35 mm film camera to obtain the same angle of view.

Most commonly, the 35 mm equivalent focal length is based on equal diagonal angle of view. Alternatively, it may sometimes be based on horizontal angle of view. Since 35 mm film is normally used for images with an aspect ratio
Aspect ratio
The aspect ratio of a shape is the ratio of its longer dimension to its shorter dimension. It may be applied to two characteristic dimensions of a three-dimensional shape, such as the ratio of the longest and shortest axis, or for symmetrical objects that are described by just two measurements,...
(width-to-height ratio) of 3:2, while many digital cameras have a 4:3 aspect ratio, which have different diagonal-to-width ratios, these two definitions are often not equivalent.

A standard 35 mm film image is 36 mm wide by 24 mm tall (35 mm refers to the height of the film including the perforations for film transport), and the diagonal is 43.3 mm. This leads to the following conversion formulas for a lens with a true focal length f:

Apart from the width- and diagonal-based 35 mm equivalent focal length definitions, there is a third definition: EFL = 50 f /d mm. However, it is not clear to what extent this definition is used.