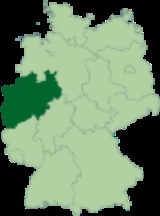 Below the 2nd Oberliga West ranked the

Amateurligas, varying in numbers (and names) but split into three zones, Niederrhein
Lower Rhine region (Germany)
The Lower Rhine region or Niederrhein is a region around the Lower Rhine section of the river Rhine in North-Rhine Westphalia, Germany between approximately Neuss and Düsseldorf in the South and the Dutch border around Emmerich in the North...
, Mittelrhein
Middle Rhine
Between Bingen and Bonn, Germany, the Rhine River flows as the Middle Rhine through the Rhine Gorge, a formation created by erosion, which happened at about the same rate as an uplift in the region, leaving the river at about its original level, and the surrounding lands raised...
, and Westfalen :

SpVgg Herten is the only team to have played in the league for all 14 seasons.

Schwarz-Weiß Essen became the 1st second-division side to win the German Cup when they did so in 1959, an achievement only repeated by Kickers Offenbach
Kickers Offenbach
Kickers Offenbach is a German association football club in Offenbach am Main, Hesse. The club was founded on 27 May 1901 in the Rheinischer Hof restaurant by footballers who had left established local clubs including Melitia, Teutonia, Viktoria, Germania and Neptun...
and Hannover 96
Hannover 96
Hannoverscher Sportverein von 1896, commonly referred to as Hannover 96, Hannover or simply 96, is a German association football club based in the city of Hanover, Lower Saxony.-Foundation to WWII:...
in the history of German football.


Disbanding of the 2nd Oberliga

In 1963, the league was disbanded in favor of the new Regionalliga. The first eight teams from this season went to the Regionalliga West. The clubs placed from ninth to sixteenth were relegated to the Verbandsligas.


The following teams were relegated to the Amateurligas:

Winners and runners-up of the 2nd Oberliga