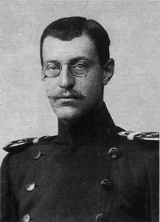 Encyclopedia
The 26th Division formally the 26th Division (1st Royal Württemberg) (26. Division (1. Königlich Württembergische)), was a unit of the Prussia
Prussia
Prussia was a German kingdom and historic state originating out of the Duchy of Prussia and the Margraviate of Brandenburg. For centuries, the House of Hohenzollern ruled Prussia, successfully expanding its size by way of an unusually well-organized and effective army. Prussia shaped the history...
n/German
German Empire
The German Empire refers to Germany during the "Second Reich" period from the unification of Germany and proclamation of Wilhelm I as German Emperor on 18 January 1871, to 1918, when it became a federal republic after defeat in World War I and the abdication of the Emperor, Wilhelm II.The German...
Army
German Army (German Empire)
The German Army was the name given the combined land forces of the German Empire, also known as the National Army , Imperial Army or Imperial German Army. The term "Deutsches Heer" is also used for the modern German Army, the land component of the German Bundeswehr...
. It was headquartered in Stuttgart
Stuttgart
Stuttgart is the capital of the state of Baden-Württemberg in southern Germany. The sixth-largest city in Germany, Stuttgart has a population of 600,038 while the metropolitan area has a population of 5.3 million ....
, the capital of the Kingdom of Württemberg
Kingdom of Württemberg
The Kingdom of Württemberg was a state that existed from 1806 to 1918, located in present-day Baden-Württemberg, Germany. It was a continuation of the Duchy of Württemberg, which came into existence in 1495...
. The division was subordinated in peacetime to the XIII (Royal Württemberg) Corps
XIII (Royal Württemberg) Corps
The XIII Army Corps was a corps of the Imperial German Army. It was, effectively, also the army of the Kingdom of Württemberg, which had been integrated in 1871 into the Prussian Army command structure, as had the armies of most German states...
(XIII. (Königlich Württembergisches) Armeekorps). The division was disbanded in 1919 during the demobilization of the German Army after World War I
World War I
World War I , which was predominantly called the World War or the Great War from its occurrence until 1939, and the First World War or World War I thereafter, was a major war centred in Europe that began on 28 July 1914 and lasted until 11 November 1918...
. The division was raised and recruited in the Kingdom of Württemberg.


Evolution of the 26th Division 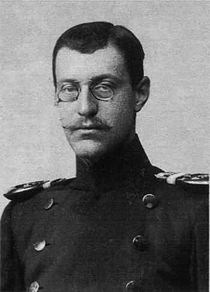 Although the 26th Division was not formed until 1871, its predecessors saw action in the Austro-Prussian War
Austro-Prussian War
The Austro-Prussian War was a war fought in 1866 between the German Confederation under the leadership of the Austrian Empire and its German allies on one side and the Kingdom of Prussia with its German allies and Italy on the...
of 1866 against Prussia and in the Franco-Prussian War of 1870–71 on the side of Prussia against France. The Württemberg Infantry Division saw action in the Main campaign in 1866, suffering a reverse at Tauberbischofsheim
Tauberbischofsheim
Tauberbischofsheim is a German town in the north-east of Baden-Württemberg on the river Tauber with a population of about 13,000. It is the capital of the Main-Tauber district....
. During the Franco-Prussian War, the Württemberg Field Division fought at the battles of Wœrth and Sedan
Battle of Sedan
The Battle of Sedan was fought during the Franco-Prussian War on 1 September 1870. It resulted in the capture of Emperor Napoleon III and large numbers of his troops and for all intents and purposes decided the war in favour of Prussia and its allies, though fighting continued under a new French...
, and then participated in the Siege of Paris
Siege of Paris
The Siege of Paris, lasting from September 19, 1870 – January 28, 1871, and the consequent capture of the city by Prussian forces led to French defeat in the Franco-Prussian War and the establishment of the German Empire as well as the Paris Commune....
and the battles of Villiers (November 30 and December 2, 1870).

During World War I, the division initially served on the Western Front
Western Front (World War I)
Following the outbreak of World War I in 1914, the German Army opened the Western Front by first invading Luxembourg and Belgium, then gaining military control of important industrial regions in France. The tide of the advance was dramatically turned with the Battle of the Marne...
. In 1914, led by Duke Wilhelm von Urach
Mindaugas II of Lithuania
Prince Wilhelm of Urach, Count of Württemberg, 2nd Duke of Urach was a German prince who was elected King of Lithuania with the regnal name Mindaugas II on 11 July 1918...
, it fought in the Battle of the Frontiers
Battle of the Frontiers
The Battle of the Frontiers was a series of battles fought along the eastern frontier of France and in southern Belgium shortly after the outbreak of World War I. The battles represented a collision between the military strategies of the French Plan XVII and the German Schlieffen Plan...
and then participated in the Race to the Sea
Race to the Sea
The Race to the Sea is a name given to the period early in the First World War when the two sides were still engaged in mobile warfare on the Western Front. With the German advance stalled at the First Battle of the Marne, the opponents continually attempted to outflank each other through...
. It was then transferred to the Eastern Front
Eastern Front (World War I)
The Eastern Front was a theatre of war during World War I in Central and, primarily, Eastern Europe. The term is in contrast to the Western Front. Despite the geographical separation, the events in the two theatres strongly influenced each other...
, and fought in the Gorlice-Tarnów Offensive
Gorlice-Tarnów Offensive
The Gorlice–Tarnów Offensive during World War I started as a minor German offensive to relieve Russian pressure on the Austro-Hungarians to their south on the Eastern Front, but resulted in the total collapse of the Russian lines and their retreat far into Russia...
and the invasion of Serbia
Serbian Campaign (World War I)
The Serbian Campaign was fought from late July 1914, when Austria-Hungary invaded Serbia at the outset of the First World War, until late 1915, when the Macedonian Front was formed...
. It returned to the Western Front and fought in the Battle of the Somme in 1916 and the Battle of Arras
Battle of Arras (1917)
The Battle of Arras was a British offensive during the First World War. From 9 April to 16 May 1917, British, Canadian, New Zealand, Newfoundland, and Australian troops attacked German trenches near the French city of Arras on the Western Front....
in 1917. In late 1917, it was sent to the Italian Front, and fought in the Battle of Caporetto
Battle of Caporetto
The Battle of Caporetto , took place from 24 October to 19 November 1917, near the town of Kobarid , on the Austro-Italian front of World War I...
. Returning to the Western Front, the division served in the 1918 German Spring Offensive
Spring Offensive
The 1918 Spring Offensive or Kaiserschlacht , also known as the Ludendorff Offensive, was a series of German attacks along the Western Front during World War I, beginning on 21 March 1918, which marked the deepest advances by either side since 1914...
and the subsequent Allied counteroffensives, including the Hundred Days Offensive
Hundred Days Offensive
The Hundred Days Offensive was the final period of the First World War, during which the Allies launched a series of offensives against the Central Powers on the Western Front from 8 August to 11 November 1918, beginning with the Battle of Amiens. The offensive forced the German armies to retreat...
. Allied intelligence rated the division as first class.

The organization of the 26th Division in 1914, shortly before the outbreak of World War I, was as follows:

Order of battle on mobilization

On mobilization in August 1914 at the beginning of World War I, most divisional cavalry, including brigade headquarters, was withdrawn to form cavalry divisions or split up among divisions as reconnaissance units. Divisions received engineer companies and other support units from their higher headquarters. The 26th Division was renamed the 26th Infantry Division. Its initial wartime organization was as follows: