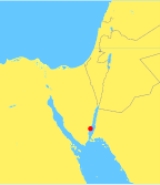 The Dahab bombings of 24 April 2006 were three bomb attacks on the Egypt
Egypt
Egypt , officially the Arab Republic of Egypt, Arabic: , is a country mainly in North Africa, with the Sinai Peninsula forming a land bridge in Southwest Asia. Egypt is thus a transcontinental country, and a major power in Africa, the Mediterranean Basin, the Middle East and the Muslim world...
ian resort city of Dahab
Dahab
Dahab is a small town situated on the southeast coast of the Sinai Peninsula in Egypt. Formerly a Bedouin fishing village, located approximately northeast of Sharm el-Sheikh, Dahab is considered to be one of the Sinai's most treasured diving destinations...
. The resorts are popular with Western tourists and Egyptians
Egyptians
Egyptians are nation an ethnic group made up of Mediterranean North Africans, the indigenous people of Egypt.Egyptian identity is closely tied to geography. The population of Egypt is concentrated in the lower Nile Valley, the small strip of cultivable land stretching from the First Cataract to...
alike during the holiday season.

The governor of South Sinai
Janub Sina'
South Sinai Governorate is the least populated governorate of Egypt. It is located in the east of the country, encompassing the southern half of the Sinai Peninsula.-Cities:* Dahab* El-Tor* Nuweiba* Saint Catherine* Sharm el-Sheikh* Taba...
reported that the blasts might have been suicide attacks, but later Habib Adly, the interior minister of Egypt said that the devices were nail bomb
Nail bomb
The nail bomb is an anti-personnel explosive device packed with nails to increase its wounding ability. The nails act as shrapnel, leading almost certainly to greater loss of life and injury in inhabited areas than the explosives alone would. The nail bomb is also a type of flechette weapon...
s set off by timers, and Egyptian TV also reported that the bombs were detonated remotely. Later investigations revealed the blasts were suicide attacks, set off by Bedouin
Bedouin
The Bedouin are a part of a predominantly desert-dwelling Arab ethnic group traditionally divided into tribes or clans, known in Arabic as ..-Etymology:...
s, as in earlier attacks in the Sinai. According to a report by the International Crisis Group
International Crisis Group
The International Crisis Group is an international, non-profit, non-governmental organization whose mission is to prevent and resolve deadly conflicts around the world through field-based analyses and high-level advocacy.-History:...
, the Dahab bombings appear to have been targeted at the Mubarak government and stem in part from a "deep resentment" of the local people of the northern Sinai over discrimination in "jobs and housing" by governmental programs.

These explosions followed other bombings elsewhere in the Sinai Peninsula
Sinai Peninsula
The Sinai Peninsula or Sinai is a triangular peninsula in Egypt about in area. It is situated between the Mediterranean Sea to the north, and the Red Sea to the south, and is the only part of Egyptian territory located in Asia as opposed to Africa, effectively serving as a land bridge between two...
in previous years: in Sharm el-Sheikh
Sharm el-Sheikh
Sharm el-Sheikh is a city situated on the southern tip of the Sinai Peninsula, in South Sinai Governorate, Egypt, on the coastal strip along the Red Sea. Its population is approximately 35,000...
on 23 July 2005 and in Taba
Taba (Egypt)
Taba is a small Egyptian town near the northern tip of the Gulf of Aqaba. Taba is the location of Egypt's busiest border crossing with neighboring Israel. Little more than a bus depot and a luxury hotel , Taba is a frequent vacation spot for Egyptians and tourists, especially those from Israel on...
on 6 October 2004.

Egyptian security officials have stated that the attacks were the work of an Islamic terror organisation
Islamic extremist terrorism
Islamic terrorism is acts of terrorism committed by Muslims for the purpose of achieving varying political and/or religious ends. Islamic terrorism has been identified as taking place in the Middle East, Africa, Europe, Southeast Asia, and the United States since the 1970s...
called Jama'at al-Tawhīd wal-Jihad.