Encyclopedia
2.8 cm schwere Panzerbüchse 41 (sPzB 41) or "Panzerbüchse 41" was a German
Nazi Germany
Nazi Germany , also known as the Third Reich , but officially called German Reich from 1933 to 1943 and Greater German Reich from 26 June 1943 onward, is the name commonly used to refer to the state of Germany from 1933 to 1945, when it was a totalitarian dictatorship ruled by...
anti-tank weapon working on the squeeze bore principle. Officially classified as heavy anti-tank rifle
Anti-tank rifle
An anti-tank rifle is a rifle designed to penetrate the armour of vehicles, particularly tanks. The usefulness of rifles for this purpose ran from the introduction of tanks in World War I and until the Korean War...
(German: schwere Panzerbüchse
Panzerbüchse
The Panzerbüchse 39 was a German anti-tank rifle used in World War II. It was an improvement of the unsuccessful Panzerbüchse 38 rifle. Panzerbüchse literally means "tank hunting rifle".-PzB 38:...
), it would be better described, and is widely referred to, as a light anti-tank gun.

Although the sPzB 41 was classified as a heavy anti-tank rifle, its construction was much more typical of an anti-tank gun. Like the latter, it had a recoil
Recoil
Recoil is the backward momentum of a gun when it is discharged. In technical terms, the recoil caused by the gun exactly balances the forward momentum of the projectile and exhaust gasses, according to Newton's third law...
mechanism, carriage and shield. The only significant feature the weapon had in common with anti-tank rifles was lack of elevation and traverse mechanisms—the light barrel
Gun barrel
A gun barrel is the tube, usually metal, through which a controlled explosion or rapid expansion of gases are released in order to propel a projectile out of the end at a high velocity....
could be easily manipulated manually.

The design was based on a cone
Cone (geometry)
A cone is an n-dimensional geometric shape that tapers smoothly from a base to a point called the apex or vertex. Formally, it is the solid figure formed by the locus of all straight line segments that join the apex to the base...
-shaped barrel, with the caliber reducing from 28 mm at the chamber
Chamber (weaponry)
In firearms, the chamber is that portion of the barrel or firing cylinder in which the cartridge is inserted prior to being fired. Rifles and pistols generally have a single chamber in their barrels, while revolvers have multiple chambers in their cylinders and no chamber in their barrel...
end to only 20 mm at the muzzle. The projectile carried two external flange
Flange
A flange is an external or internal ridge, or rim , for strength, as the flange of an iron beam such as an I-beam or a T-beam; or for attachment to another object, as the flange on the end of a pipe, steam cylinder, etc., or on the lens mount of a camera; or for a flange of a rail car or tram wheel...
s; as it proceeded toward the muzzle, the flanges were squeezed down, decreasing the diameter with the result that pressure did not drop off as quickly and the projectile was propelled to a higher velocity. The barrel construction resulted in very high muzzle velocity: up to 1,400 m/s. The bore was fitted with a muzzle brake
Muzzle brake
Muzzle brakes and recoil compensators are devices that are fitted to the muzzle of a firearm or cannon to redirect propellant gases with the effect of countering both recoil of the gun and unwanted rising of the barrel during rapid fire...
. The horizontal sliding block breech was "quarter-automatic": it closed automatically once a shell was loaded. The gun was equipped with open sight for distances up to 500 m; telescopic sight ZF 1х11 from 3.7 cm Pak 36 anti-tank gun could also be fitted.

The recoil system consisted of hydraulic recoil buffer and spring-driven recuperator. The carriage was of split trail type, with suspension. Wheels with rubber tires could be removed, making the gun significantly lower and therefore easier to conceal; the process took 30–40 seconds. The gun construction allowed toolless dismantling to five pieces, the heaviest of which weighed 62 kg. 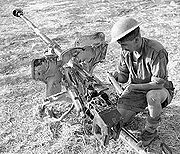 The cone-bore principle was first patented in 1903 by a German designer Karl Puff. In the 1920s and 1930s another German engineer, Gerlich, conducted experiments with coned-bore barrels which resulted in an experimental 7 mm anti-tank rifle with muzzle velocity of 1,800 m/s.

Based on these works, in 1939–1940 Mauser-Werke AG
Mauser
Mauser was a German arms manufacturer of a line of bolt-action rifles and pistols from the 1870s to 1995. Mauser designs were built for the German armed forces...
developed a 28/20 mm anti-tank weapon initially designated Gerät 231 or MK.8202. In June–July 1940 an experimental batch of 94 (other sources say 30) pieces was given to the army for trials. The trials resulted in some modifications and in 1941 mass production of what became 2.8 cm schwere Panzerbüchse 41 started. One piece cost 4,520 Reichsmarks
German reichsmark
The Reichsmark was the currency in Germany from 1924 until June 20, 1948. The Reichsmark was subdivided into 100 Reichspfennig.-History:...
(for the sake of comparison, one 5 cm Pak 38
PaK 38
The 5 cm PaK 38 was a German anti-tank gun of 50 mm calibre. It was developed in 1938 by Rheinmetall-Borsig AG as a successor to the 37 mm PaK 36, and was in turn followed by the 75 mm PaK 40.-Service:The PaK 38 was first used by the German forces during the Second World War...
gun cost 10,600 Reichsmarks). The last gun was built in 1943; the main reason for the discontinuance was lack of tungsten
Tungsten
Tungsten , also known as wolfram , is a chemical element with the chemical symbol W and atomic number 74.A hard, rare metal under standard conditions when uncombined, tungsten is found naturally on Earth only in chemical compounds. It was identified as a new element in 1781, and first isolated as...
for projectiles.

sPzB 41 was used by some motorized divisions
Division (military)
A division is a large military unit or formation usually consisting of between 10,000 and 20,000 soldiers. In most armies, a division is composed of several regiments or brigades, and in turn several divisions typically make up a corps...
and by some Jäger (light infantry), Gebirgsjäger
Gebirgsjäger
Gebirgsjäger, in English Mountain Riflemen, is the German designation for mountain infantry. The word Jäger is the traditional German term for rifleman...
(mountain) and Fallschirmjäger
Fallschirmjäger
are German paratroopers. Together with the Gebirgsjäger they are perceived as the elite infantry units of the German Army....
(paratrooper) units. Some guns were supplied to anti-tank and sapper
Sapper
A sapper, pioneer or combat engineer is a combatant soldier who performs a wide variety of combat engineering duties, typically including, but not limited to, bridge-building, laying or clearing minefields, demolitions, field defences, general construction and building, as well as road and airfield...
units. The weapon was employed on the Eastern Front
Eastern Front (World War II)
The Eastern Front of World War II was a theatre of World War II between the European Axis powers and co-belligerent Finland against the Soviet Union, Poland, and some other Allies which encompassed Northern, Southern and Eastern Europe from 22 June 1941 to 9 May 1945...
from the beginning of the hostilities (on 1 June Wehrmacht possessed 183 pieces) until the end of the war and also saw combat in the North African Campaign
North African campaign
During the Second World War, the North African Campaign took place in North Africa from 10 June 1940 to 13 May 1943. It included campaigns fought in the Libyan and Egyptian deserts and in Morocco and Algeria and Tunisia .The campaign was fought between the Allies and Axis powers, many of whom had...
and on the Western Front
Western Front (World War II)
The Western Front of the European Theatre of World War II encompassed, Denmark, Norway, Luxembourg, Belgium, the Netherlands, France, and West Germany. The Western Front was marked by two phases of large-scale ground combat operations...
in 1944–1945.

Short-range shots from sPzB 41 could penetrate most World War II armour; a lucky shot could even damage heavy tanks such as KV-1
Kliment Voroshilov tank
The Kliment Voroshilov tanks were a series of Soviet heavy tanks, named after the Soviet defense commissar and politician Kliment Voroshilov. The KV series were known for their extremely heavy armour protection during the early war, especially during the first year of the invasion of the Soviet...
and IS-2
Iosif Stalin tank
The Iosif Stalin tank , was a heavy tank developed by the Soviet Union during World War II and first used in the Kursk area in September 1943...
(at least in one instance a projectile penetrated the lower front plate of the latter).

The sPzb 41 was also mounted on SdKfz 250
SdKfz 250
The Sd.Kfz. 250 was a light armoured halftrack, very similar in appearance to the larger Hanomag-designed Sd.Kfz. 251, and built by the DEMAG firm, for use by Nazi Germany in World War II....
half-tracks; this variant was designated SdKfz 250/11. A few were mounted on SdKfz 221
Leichter Panzerspähwagen
The Leichter Panzerspähwagen were a series of light four-wheel drive armoured cars produced by Nazi Germany from 1935 to 1944....
armored cars.

Squeeze bore guns saw only limited use in World War II. Manufacturing of such weapons was impossible without advanced technologies and high production standards. The only country except Germany to bring such weapons to mass production was Britain with Littlejohn adaptor
Littlejohn adaptor
The Littlejohn adaptor was a device that could be added to the British QF 2 pounder anti-tank gun. It was used to extend the service life of the 2-pounder during the Second World War by converting it to squeeze bore operation...
which—although not a gun by its own right—used the same principle. An attempt of Soviet design bureau headed by V. G. Grabin
Vasiliy Grabin
Vasiliy Gavrilovich Grabin was a Soviet artillery designer. He led a design bureau at Joseph Stalin Factory No...
in 1940 failed because of technological problems. In the US, reports about the sPzB 41 inspired a series of experiments with 28/20 barrels and taper bore adaptors for the 37mm Gun M3
M3 37 mm gun
The 37 mm Gun M3 was the first dedicated anti-tank gun fielded by United States forces. Introduced in 1940, it became the standard anti-tank gun of the U.S. infantry with its size enabling it to be pulled by a jeep...
; the work started in September 1941 and continued throughout the war, with no practical results.

sPzB 41 combined good anti-armor performance at short range and high rate of fire with small, lightweight (for anti-tank gun), dismantleable construction.
However, it also had several shortcomings, such as:

Some authors that criticize the sPzB 41 concentrate mainly on short service life of its barrel. However, a chance of survival after 500 short-range shots was slim anyway. It should also be noted that high-velocity guns with "normal" barrel construction also had short service life, e.g. for the Soviet 57-mm ZiS-2
ZiS-2
The ZiS-2 was a Soviet 57-mm anti-tank gun used during World War II. The ZiS-4 was a version of the gun meant to be installed in tanks. ZiS stands for Zavod imeni Stalina , the official title of Artillery Factory No...
it was about 1,000 shots. In the end, the factor that brought the production of sPzB 41 to a halt was the shortage of tungsten.

The Pzgr.41 had a tungsten carbide
Tungsten carbide
Tungsten carbide is an inorganic chemical compound containing equal parts of tungsten and carbon atoms. Colloquially, tungsten carbide is often simply called carbide. In its most basic form, it is a fine gray powder, but it can be pressed and formed into shapes for use in industrial machinery,...
core, a soft steel casing and a magnesium
Magnesium
Magnesium is a chemical element with the symbol Mg, atomic number 12, and common oxidation number +2. It is an alkaline earth metal and the eighth most abundant element in the Earth's crust and ninth in the known universe as a whole...
alloy ballistic cap. The core was 40 mm long and 10.9 mm in diameter and contained about 9.1% of tungsten.

Tapered Bore Gives This German Gun Its High-Velocity December 1942 article revealing new German antitank gun with excellent drawing explaining "squeeze" principle.
The source of this article is wikipedia, the free encyclopedia.  The text of this article is licensed under the GFDL.