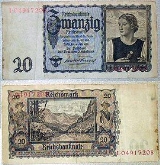 Overview
The Reichsmark was the currency
Currency
In economics, currency refers to a generally accepted medium of exchange. These are usually the coins and banknotes of a particular government, which comprise the physical aspects of a nation's money supply...
in Germany
Germany
Germany , officially the Federal Republic of Germany , is a federal parliamentary republic in Europe. The country consists of 16 states while the capital and largest city is Berlin. Germany covers an area of 357,021 km2 and has a largely temperate seasonal climate...
from 1924 until June 20, 1948. The Reichsmark was subdivided into 100 Reichspfennig.
The Reichsmark was introduced in 1924 as a permanent replacement for the Papiermark
German papiermark
The name Papiermark is applied to the German currency from the 4th August 1914 when the link between the Mark and gold was abandoned, due to the outbreak of World War I...
. This was necessary due to the 1920s German inflation which had reached its peak in 1923. The exchange rate between the old Papiermark and the Reichsmark was 1 ℛℳ = 1012 Papiermark (one "trillion" in US English, one "billion" in British English, German and other European languages, see long and short scales
Long and short scales
The long and short scales are two of several different large-number naming systems used throughout the world for integer powers of ten. Many countries, including most in continental Europe, use the long scale whereas most English-speaking countries use the short scale...
).

What is the value on a 1935 deutsches reich reichspfennig 10 coin?

25 5 reichsmark notes have come into my possession. They were printed in Berlin in August 28, 1933. They are series B notes with consecutive numbers 1...

What would be the value of 1 Reichsmark in 2009 US$ or Euros? Is there an authoritative source for this sort of conversion?

Can anyone give values for German reichsmarks? I have a 20 and a 50.
More